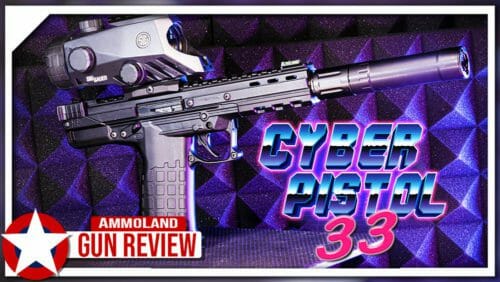 AmmoLand News can’t get enough of the Kel-Tec CP33 Pistol and soon neither will you.

U.S.A. -(AmmoLand.com)- I always try to be objective in my reviews, but I was obsessed with the Kel-Tec CP33 the moment I saw it; From its Robocop pseudo-subgun/PDW appearance to its capacious 33-round magazine, it was everything the 18-year-old-me ever wanted in a 22 handgun. But now that I’ve had a chance to fire nearly 1,000-rounds through the futuristic little gun, is the honeymoon over, or is the CP33 everything I’ve ever wanted?

If you’re read your fair share of gun reviews in the past, it will likely come as no surprise that the answer isn’t a simple yes or no. But if you’re sitting at the gun counter right now, money in hand, and wondering if you should buy one, I’d say go for it if you’re looking for a fun range toy. But if you have a different role in mind for the CP33, read on.

Before I get into the details of the review, let’s first take a look under the hood to see how the Kel-Tec works. First off, the CP33 is a standard direct blowback-operated, semi-automatic magazine-fed pistol chambered in .22lr. If you know anything about rimfire auto-loaders, this should come as no surprise. Virtually all semi-automatic rimfire guns are blowback-operated because it’s very simple to produce and generally less ammunition-sensitive than locked-breech firearms. So does this mean the Kel-Tec CP33 is no different than a more traditional-looking rimfire pistol like a Ruger MKIV or Browning Buckmark?

Absolutely not. It may share the same method of operation, but by that same measure, all bolt-action rifles are identical. But it’s not how the mechanics of the actual firearm that separates the Kel-Tec from other handguns, but rather its magazine.

It’s not just that the CP33’s magazine holds more rounds than virtually any other traditional rimfire handgun, but how the magazine accomplishes this that makes the new Kel-Tec pistol so interesting.

Most rimfire pistols utilize a single stack magazine to feed cartridges to the chamber. By this, I mean literally, a spring-loaded box that situates a straight row of rounds directly beneath one another, not unlike say an M1911. Higher-capacity centerfire pistols like the Glock utilize a staggered column of rounds inside of a magazine whose internal space is roughly 50% wider than the cartridges themselves, but this isn’t practical for rimfire rounds.

Why? Because the rims themselves tend to snag on each other, leading to a malfunction referred to as rim-lock. This is why the Soviets utilized a pan magazine on their DP-28 LMG chambered in the rimmed 7.62x54r cartridge, and why the capacity of the British Bren gun is limited to 30-rounds. (Although the British did field a 100-round pan magazine like the Soviets in limited numbers.)

Indeed I did. And the solution by the engineers at Kel-Tec was to add open side walls to the magazine to allow shooters to properly align any rounds that tend to work themselves into a rim lock situation.

If that seems like a bandaid solution to a much bigger issue, you’re not wrong. It definitely doesn’t completely prevent the issues of rimfire rounds in a stagger column magazine, but it should allow a shooter to alleviate the problem before it becomes one.

But does it actually work?

When loaded properly, absolutely. But that’s a bigger caveat than it sounds. It’s very easy for an inexperienced shooter to load the magazine in such a way that it looks like it’s properly aligned, only to find out 20-rounds in, that some of the lower rounds aren’t quite line up. And because the alignment of one round affects all the rest, performing a standard tap rack bang malfunction clearing procedure will result in another failure to chamber. Truth be told, getting all the rounds perfectly lined up is more difficult than it looks, but with practice becomes pretty simple. The best source for how to do so is in the Kel-Tec CP33’s user manual and spare Kel-Tec CP33 22LR 33rd Magazines are readily available.

But enough about the magazine, let’s get a rundown of all the CP33’s features.

Starting at the business end, the Kel-Tec CP33 ships with a 5.5-inch, 1/2×28 threaded stainless steel barrel. I tested this barrel with several muzzle devices, and everything from flash-hiders and linear compensators to my favorite new rimfire suppressor (The Rugged Suppressor Mustang 22 from SilencerShop fit and ran flawlessly.

Behind the muzzle, the CP33 includes a set of fiber-optic super-low-profile post and notch iron sights that are clearly designed to get out of the way of any mounted optics. This is because the entire top of the CP33 features a monolithic Picatinny rail. I found that if a shooter isn’t running a brace, then a pistol optic like a Holosun HE507C or Trijicon RMR on the lowest possible mount made for the most natural-feeling setup.

Under the front sight, the Kel-Tec CP33 features an M-Lok slotted dust cover that appears to be the perfect length to not fit any of the M-Lok rail segments I had on hand. So I needed to modify one by cutting off one of the alignment notches and only using a single mounting bolt. This is something I wouldn’t normally advise since it does compromise the mounting strength of the rail. But since the CP33 is only chambered in .22lr, I took that risk and it paid off handsomely. The Streamlight TLR-10 Flashlight I mounted on the handgun never budged, and its laser held zero after a few hundred rounds.

Alternatively, a shooter could simply buy a super short rail segment or an accessory that directly mounts to the M-Lok slot.

But be advised, a hand-stop or angled grip are completely fine, but a vertical grip can get you in hot water with the ATF if you don’t have a tax stamp for the little polymer pistol.

Behind the dust cover, the CP33 features the iconic Kel-Tec molded grip pattern on its oblong grip. Despite the grip’s appearance, it’s actually fairly comfortable to hold, and it positions the shooter’s hands perfectly to toggle the ambidextrous safety lever behind and above it. But there’s one thing conspicuously absent between the grip and the trigger – a magazine release.

That’s because the engineers at Kel-Tec decided to depart from the gun’s overall very futuristic appearance and incorporate an old-school European-style heel release at the bottom of the grip. (Not unlike the one found on the Walther PPK.) I’m not normally a fan of this setup, but given that the CP33 isn’t a combat pistol, it doesn’t bother me.

Above the grip, the CP33 features an ambi bolt-release that some shooters have reported issues with. But the example I reviewed – which wasn’t a T&E from the factory, but a gun I bought at a local shop – never had an issue with the release whatsoever.

At the very back of the handgun is the charging latch that takes more than a few notes from both the AR-15 and the HK MP7 PDW. It’s non-reciprocating, which is awesome, but it is made of very thin steel with polymer handles at the rear. And to be honest, its construction doesn’t inspire a tremendous amount of confidence. And if that really bothers you, there’s a cottage industry of aftermarket parts makers who now offer more robust all-aluminum charging latches.

Now that you know everything about the gun and its features, let’s talk about how the gun actually ran.

After 1,000 rounds of various types of .22lr ammo, including a half dozen different varieties of standard and high-velocity 22LR ammunition, the Kel-Tec CP33 encountered around 30 malfunctions in my testing. Half of these were first-round failures to chamber either during the first 200 rounds fired through the gun, or after a hundred or so rounds fired suppressed. The former is because the gun needs a little break-in period, while the latter is 100% due to excess carbon build-up from running the gun suppressed.

On an interesting side note, the gun never malfunctioned on the first round when using the bolt release.

Accuracy was good bordering on great, with the Kel-Tec CP33 easily capable of hitting targets out to 100 yards with a reflex sight attached. Though I suspect the gun would be infinitely more capable with a low-powered magnified optic and a stabilizing brace attached. But as it comes, the CP33 makes short work of tin cans, squirrels, and clay pigeons out to 50 yards.

So, is the futuristic polymer pistol worth a buy? With an MSRP of $475 (and in my experience street prices are much lower), the Kel-Tec CP33 Pistol is a solid deal that when babied a little bit, runs like a champ. Yes, the magazine can be problematic if not loaded properly, but with some practice, the CP33 makes a solid plinking pistol that would work well in a role as a hiking gun or varment pistol. Its looks might not appeal to everyone, but for those of us who dream of blasting cyborgs beneath neon signs in a rain-soaked Neo-Tokyo, the CP33 is pretty damn slick.