Janelle Westrom This Week on Riding Shotgun With Charlie #126 ~ VIDEO 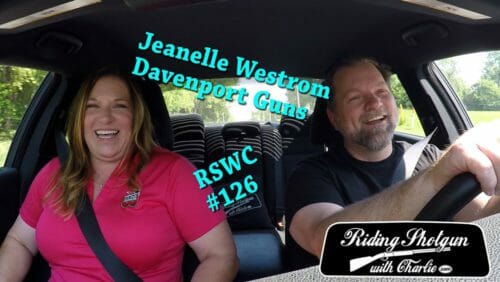 U.S.A. -(AmmoLand.com)- Janelle Westrom is someone whose name I’ve been hearing for a while.  She’s a friend of other friends, and that’s almost family in the gun community. Family is what the gun community is about. I reached out to Jeanelle and asked if she’d be up for being a passenger. I was heading to Sioux Falls for a class and I was going to be ‘swinging through’ the Davenport area and I could film a show with her.

We met at Davenport Guns and Jeanelle brings me in where she spent the day before shooting Gel Blasters (https://gelblaster.com/) at some friends driving in their cars.  There were a few Gel Blasters in the store and she proceeded to shoot them a bit. I knew this was going to be fun.
Jeanelle’s grandpa was a gunsmith, her dad was a gun guy, and she was born with Hoppe’s in her bloodstream. Her dad took and her sisters to the range because he needed ‘brass rats’ to pick up the brass so he could reload. He spent time in the military and took a job at Rock Island Arsenal, where much of the military firearms went through and it’s where the Army does weapon development. With many connections through her father, she was able to build Davenport Guns and their range. Eventually, her father made connections to engineers at Armalite. Yes,

THAT Armalite. And he ended up purchasing the drawing for the rifle in 1994. After having the plans for 20 years, he sold the company and did quite well for himself. To keep himself busy, he does the internet sales for Davenport Guns.

Jeanelle started competitive shooting at the Bianchi Cup hanging out with many famous shooters like Jerry Miculek and Bruce Piatt. She made connections from all over the world including Spain, Germany, and Australia during competitive shooting.
While doing HR for a company in Georgia, she found herself at a crossroads at work.  But when her dad called and asked if she wanted to open a gun store, he needed an answer in three hours. After not opening that business, Jeanelle already had the paperwork going for an FFL and she decided to go ahead with the plans anyway. That’s how Davenport Guns got started.

The range hosts several training courses as Jeanelle believes that a store that sells guns should also make sure their clients can shoot a gun. She also has over 400 women in her A Girl & A Gun club! In the advertising for the store, Jeanelle shoots.  That alone has inspired several women to buy a firearm and get some training.

Jeanelle is also involved with The DC Project. While she lives in a very gun-friendly state, she’s going to DC to help other women talk to their politicians. And her senators help Holly Sullivan (RSWC #036 ) &  Brooke Cheney (RSWC #075) on talking with Governor Murphy in Connecticut. Some of her DC Project success stories bring politicians from crossed arms to hugs when she left.

Jeanelle has so many great stories and they’re all really funny.  I’m sure you’ll enjoy them as much as I did. Between her father, Jerry Miculek, and the pistol teams from around the world, she’s having a lot of fun. There are people that are squeezing the maximum yield out of life. Jeanelle is one of them. She’s on the go, doing something, and keeping very, very busy. And she’s having fun along the way.

Favorite quotes
“I’ve been very, very blessed in my life to be surrounded by phenomenal people who are willing to teach me stuff.”
“Anything you hand me I can shoot fairly well.”
“Life is too short to not have fun. You’ve gotta have fun.”
“It doesn’t make sense to me to sell somebody their first gun and not have the ability to teach them to be safe with it.”
“If I tell you I want you to practice, I don’t want to make it cost-prohibitive to do so.”
“Don’t mess with this girl, she cray.”

This is a more intimate conversation than a phone, radio, or Skype interview. You get to see the passengers. And you’ll see where the road and the conversation take you! www.ridingshotgunwithcharlie.com, Facebook