Henry Model X – The Old-Fashioned Rifle of the Future 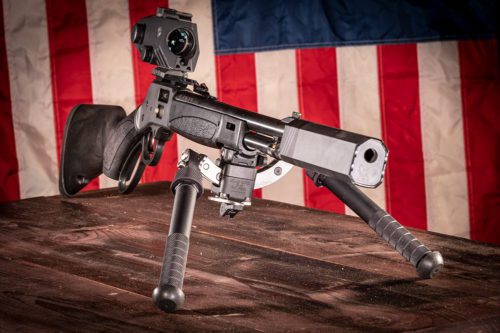 U.S.A. -(AmmoLand.com)- Henry Model X – The old-fashioned rifle of the future; the only gun that fits my personal bizarre eclectic taste in firearms. But even if you don’t like modern takes on classic guns, the Henry Model X is just an all-around bad-ass gun that despite its archaic roots is still relevant, versatile, and as potent as ever.

But are the new additions enough to truly bring the lever-gun into the 21st century? Or am I just viewing the gun through rose-tinted Pit-Viper glasses?

Despite their manual operation, lever-action rifles like the Henry are deceptively complex. This is especially true of the older Winchester rifles with their almost clockwork internals.

But modern Henrys are vastly more streamlined to make them more affordable to produce without sacrificing quality. But even though the guns are modernized versions of the original Henry rifles from the Wild West, they still incorporate some relatively outdated features. And among all these dated features, none receives more criticism than the Henry’s use of a forward loading tube.

If you’re not familiar with the guns, all older models of Henry rifles are loaded from the front. This means that shooters have to remove the magazine tube, drop the desired number of cartridges into the mag tube housing before replacing the tube.

The process is by no means difficult, but neither is it terribly fast. Though the most problematic aspect of it is that it requires shooters to both manipulate a potentially loaded firearm less than an inch from the muzzle and have to take the gun fully out of a potential fight to reload.

And sure, not everyone who buys a firearm needs it for a life-or-death struggle pinned behind cover desperately reloading their lever-gun while lead pours from the sky. But it’s still an obvious inconvenience.

This is why so many shooters were excited when Henry announced their Model X would incorporate a side loading gate like the Winchester and Marlin rifles that came before it. And not just for hypothetical scenarios involving panicked reloads. But also, because this feature allows shooters to top-off the magazine tube between shots. Allowing them to keep the gun filled to capacity without having to pull it down first.

But this isn’t the only noteworthy feature incorporated by the new Henry. The futuristic cowboy gun also utilizes polymer for its furniture to reduce the weapon’s overall weight. Not to mention that it does away with the aesthetically pleasing and period-correct buckhorn sights normally found on the gun for brilliantly bright, adjustable fiberoptic post and notches sights.

On the receiver itself, the Model X features an enlarged loop handle making it easy for shooters of all sizes to use – and if shooters want an even larger option, the X can utilize the extra-large level loops meant for the traditional Henry Big Boy carbines. (The same is allegedly true for the furniture, but I didn’t have a Big Boy on hand to confirm this.)

Speaking of furniture, the polymer forearm on the Henry Model X isn’t just futuristic-looking for cosmetic sakes, it also incorporates a Picatinny rail on the bottom and a pair of M-Lok slots on the side. This makes for a perfect mounting system for tactical lights, lasers, or even bipods.

But for me, it’s what’s at the end of the Henry’s 16-inch barrel that truly sells me on the gun – a 5/8×24 threaded muzzle. Because what lever-gun would be complete without a sound suppressor?

Model X Gonna’ Give it to Ya

And truth be told, at first, I wasn’t terribly impressed by the performance of the little carbine when suppressed. Because it was still pretty loud when paired with full-power .357 Magnum rounds. But Henry Model X really came into its own when I loaded up some 158gr .38 special rounds.

While it’s difficult to accurately express just how quiet the Henry was, the impacts on my dirt berm were markedly louder than the shot itself. So much so, that I would argue heavy-grain .38 special rounds combined with a quality big-bore can like the SilencerCo Osprey45 (provided by SilencerShop.com) make the Henry was as quiet as, and possibly quieter than a suppressed .22lr carbine.

To put it another way, the combination resulted in a truly Hollywood-quiet setup.

Accuracy from the carbine was solid as well. With hits on a six-inch steel gong at 150 yards using a red dot being laughably easy. Though if you’re using .38 special rounds instead of .357 Mag, you’ll have to add about a five-inch holdover since the rounds aren’t exactly, ‘screaming’ out the barrel.

One downside of the Henry I wanted to address, is reliability in certain circumstances. I found that occasionally if I worked the action a little too hard or fast while the carbine was tilted forward or backward at just the right angle, it would occasionally malfunction.

Essentially, the round would bind between the bolt and the elevator and make closing the action neigh impossible without sticking a finger, or pen, or knife inside the action and knocking the round loose.

Overall, with an MSRP of $1,000, the Henry Model X is by no means the cheapest option on the pistol caliber carbine market. But I truly believe it is among the most versatile – especially when paired with a can. The addition of a suppressor allows shooters to choose between whisper-quiet lead delivery, and hard-hitting .357 Magnum power appropriate for deer, smaller bears, and even two-legged animals looking to do harm to you and your loved ones. It’s an oddball gun to be sure, but one that definitely has a prominent place in my firearms collection.

The post Henry Model X – The Old-Fashioned Rifle of the Future appeared first on AmmoLand.com.