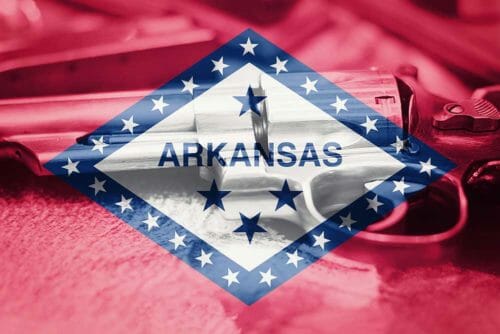 U.S.A. –-(AmmoLand.com)- 4029tv.com reports that hundreds of Arkansas laws have become effective on 28 July 2021. Among those laws are several incremental reforms of firearms and self-defense law, removing restrictions that were previously in place. The links below go directly to the Arkansas state legislative site, which has the exact wording of the new law. Here is a summation of the changes, with links.

Act 1024 removes the prohibition on carrying in places owned, controlled, or operated by a local unit of government, if they have  a carry permit, except for the following:

People with carry permits are still banned from local government places in buildings containing a place licensed to dispense alcohol for consumption on the premises.

Guns are still banned at football, baseball, soccer or other fields when an athletic event or practice is occurring.  (Act 638 and Act 693)

Act 809 removes the requirement for an employee, who stores their gun in their locked car in a parking lot, from being in a separate locked container.

Act 433 removes the prohibition on the possession of loaded centerfire weapons in parts of Baxter and Benton counties.

Act 250 removes the requirement to retreat before a person may legitimately defend themselves. This sort of law has been called a “stand your ground” law.

These are the sort of reforms and improvements we see in more and more states around the country. Second Amendment supporters keep working on ways to restore rights and remove unnecessary restrictions.  Many of the most effective organizations are state-based. That is where most effective change is being made.

State organizations of Second Amendment supporters have the advantage of being able to mobilize hundreds, thousands or tens of thousands of local supporters on short notice. A state legislator may receive 10 emails on an ordinary bill. When he receives a thousand, he pays attention. Because of state groups’ proximity, they can watch the legislative process intently.

For these reasons,  state organizations roll up success after success. Success becomes habitual and contagious. When a state organization finds a particular legislator who either blocks their desires or cooperates with them well, they are able to provide punishment and rewards.

At the state level, a dozen volunteers during a primary may make all the difference between success and failure.

The rise of the Internet has allowed state groups to organize and operate with much greater ease and impact than ever before in history.