Even the Left Thinks Biden’s ATF Nominee, David Chipman, is a Racist 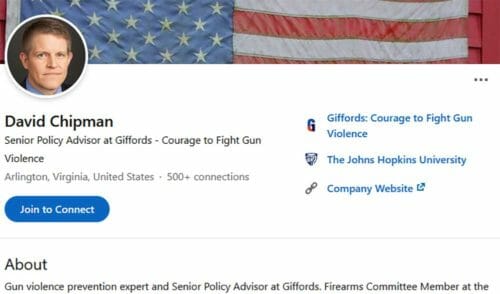 USA – -(AmmoLand.com)- While President Biden’s ATF Director Nominee David Chipman has had a hard time evading his past as a gun control lobbyist, Senate Democrats have been incredibly successful at brushing aside his connections to and allegations of racism.

At first, these allegations were uncovered by the American Accountability Foundation (AAF), a non-profit government oversight and research organization. AAF uncovered testimony from a former ATF agent and colleague of Chipman, who recalled him making the racist commentary:

“Wow, there were an unusually large number of African American agents that passed the exam this time. They must have been cheating.”

But its not just Conservatives and ATF agents calling David Chipman a racist—it’s the radical Left, too!

David Chipman was Senior Vice President at ShotSpotter Inc. where he openly brags about leading their sales team during a “2 year period of explosive growth.”

However, Left-leaning organizations like the Action Center on Race and the Economy (ACRE) routinely lobby for local police to “cancel the contract[s]” they have with ShotSpotter over effectiveness, expense, and racism concerns.

@shotspotter wouldn’t survive #defund. Because policing & criminalizing us is their bread and butter. The #defund movement anticipated the capitalistic shift towards surveillance, in order to protect investments in the nearly $60 BILLION industry. #StopShotspotter @defundcpdchi pic.twitter.com/Cl4KiB8wgE

Whatever you believe about the Defund the Police movement or Critical Race Theory, it is clear that David Chipman’s ShotSpotter technology meets the radical Left’s definition of “racist.”

In fact, the Left appears to be unifying in its condemnation of ShotSpotter technology—with local branches of the ACLU, NAACP, and Democratic Socialists of America recently teaming up to prevent local police from signing a new contract with ShotSpotter in Worcester, Massachusetts.

According to ACRE, the technology doesn’t work, and “[t]he overwhelming majority of ShotSpotter alerts turn up nothing.”

However, ACRE does admit that ShotSpotter is good at “put[ting] Black and brown residents at risk.”

ACRE’s most recent data suggests that “ShotSpotter creates 60+ dangerous situations every day in police districts with the largest Black and Latinx [sic] populations.”

And according to a new VICE investigation, a ShotSpotter analyst “manually overrode the algorithms and ‘reclassified’ [a] sound as a gunshot [and] changed the alert’s coordinates” to make the ShotSpotter report fit the Chicago police’s evidence in a murder arrest.

The release of this information ultimately prompted “[p]rosecutors in Chicago […] to withdraw evidence generated by the technology,” rather than allow “an Illinois court [to] formally examin[e] the science and source code behind ShotSpotter.”

Apparently, VICE also holds ShotSpotter responsible for an alert that ultimately resulted in the police shooting and killing an unarmed child as well.

So David Chipman’s ShotSpotter technology doesn’t work, disproportionately affects majority black and brown communities, has been used by police to falsify evidence, and has resulted in the death of a child.

From what I learned in the summer of 2020, that’s more than enough evidence to incite another Black Lives Matter “peaceful” protest!

With Americans on the Right and Left seemingly unified in their concerns over Chipman’s ties to racism, it would seem Sen. Grassley is striking a bipartisan note by demanding “a public hearing to address these allegations before any move is made to advance [David Chipman’s] failed nomination to the Floor.”

But thus far, Senate Democrats appear to have ignored the opposition to David Chipman coming from the radical Left.

So, it remains to be seen what Senate Democrats will choose to do in light of these allegations and what will ultimately become of this troubled nominee.

Aidan Johnston is the Director of Federal Affairs for Gun Owners of America, a nonprofit grassroots lobbying organization dedicated to protecting the right to keep and bear arms without compromise. GOA represents over two million members and activists and can be found at www.gunowners.org. Click here to join Gun Owners of America.

The post Even the Left Thinks Biden’s ATF Nominee, David Chipman, is a Racist appeared first on AmmoLand.com.