Before Booting Biden, Look Over Horizon at Harris 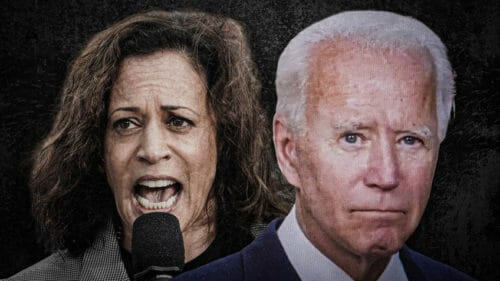 Fox News is reporting that Congressman Ronny Jackson (R-TX), the former White House physician, has doubts Joe Biden will finish his term as president, and he is calling on Biden to undergo an exam and disclose the results publicly.

“Our cities are EXPLODING with drugs & violence,” Jackson tweeted, “because of Democrat ‘defund the police’ policies and the GREAT UNITER Joe Biden deflects to talk about ‘sucking blood out of kids.’ He’s completely LOST it! Needs a cognitive exam NOW!”

But before anyone gets too excited about getting Biden out of office, whether it be voluntary or by invoking the 25th Amendment, better think ahead about his replacement. As vice president, Kamala Harris would immediately be sworn into office, and many believe she would be a disaster. After all, she dropped out of the Democratic primary race early, not because of Republican opposition but because she did not resonate with voters in her own party.

Our cities are EXPLODING with drugs & violence because of Democrat “defund the police” policies and the GREAT UNITER Joe Biden deflects to talk about “sucking blood out of kids.” He’s completely LOST it! Needs a cognitive exam NOW!
pic.twitter.com/ot3ZwUc2Bf

Her message on guns has been crystal clear since she started running for the presidency almost three years ago. She would go after gun owners, give Congress 100 days to pass the kinds of actions she supports, including a ban on so-called “assault weapons,” and if nothing happened, she would take executive action.

As reported at the time by Harper’s Bazaar, “Harris publicly committed to a host of executive actions that she would have undertaken if elected to the Oval Office, including mandating universal background checks, revoking the licenses of (and possibly prosecuting) gun manufacturers who break the law, closing a legal loophole in order to prevent those convicted of domestic violence from purchasing a firearm, and banning AR-15-style assault weapons from being imported into the country.”

When she was California attorney general, Harris was sued by gun rights and retail firearms organizations including the Second Amendment Foundation, Calguns Foundation and California Association of Federal Firearms Licensees.

Harris wants to hold gun manufacturers for crimes committed with firearms. In all, Biden may be bad but Harris has the potential to be a lot worse, and if she were to assume office 25 months into Biden’s term, she would be legally eligible to run for her own two full terms.

Bottom line is Harris would be bad news, and not just for gun owners and the Second Amendment.

Her tactic of answering questions she doesn’t want to answer by first being sarcastic and then breaking out into cackling laughter is wearing thin. That doesn’t mean she won’t continue doing it.

Democrats have wanted to be the first party to put a woman in the White House. They missed the mark with Hillary Rodham Clinton, but they might score with Harris.

Biden’s recent debacle during the CNN Townhall when his slip-of-tongue revealed he does want to ban 9mm pistols, and his other gaffes since taking office, and his shifting of gears midstream in a sentence suggest to many, including rep. Jackson, that he is not in full control of his faculties.

In a revealing piece aired by the KFMB in September 2020, the report acknowledged that what the Biden-Harris team wanted to do then was to “make the U.S. like California.” To gun owners in Idaho, Montana, Colorado, Oregon, Washington, the Dakotas, Utah, Arizona, Texas and elsewhere west of the Mississippi River, that’s the kind of discussion that starts brawls.

The only thing that could change what may be on the horizon is a Republican capture of Capitol Hill—both the Senate and the House of Representatives—in November 2022. With the GOP in control, neither Biden or Harris would accomplish anything. Should Republicans win back the House, it is not inconceivable Nancy Pelosi and other older Democrats would decide to retire.

But it would have to be a decisive GOP victory in November 2022, meaning that every gun owner would have to vote, instead of sitting the election out.

In the meantime, if Harris does somehow take the reins with a Biden departure—he will have, after all, achieved his 47-year quest to win the presidency that began when he first set foot in Washington, D.C.—there could be far more trouble than gun owners care to imagine.

That’s why talk of sending Biden home to write his memoirs should be alarming to gun owners, because while he may be losing momentum, Harris is just warming up.

The post Before Booting Biden, Look Over Horizon at Harris appeared first on AmmoLand.com.