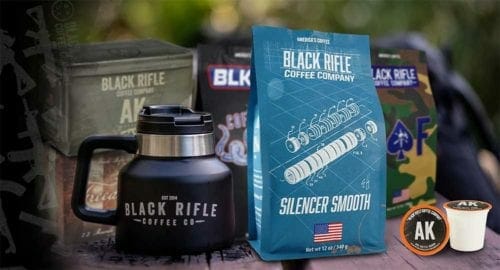 U.S.A. –-(AmmoLand.com)- The  Black Rifle Coffee Company (BRCC) has been a rising star in the conservative constellation. It has been becoming a center for conservative networking and interaction.  There appears to be an effort to stop the rise, at least at the New York Times. A recent New York Times (NYT) Magazine article (14 July) has painted the BRCC executives as, at minimum, moderates who despise their base but see them like sheep to be fleeced.

Anything from the NYT is viewed with extreme suspicion by conservatives. There have been too many times where the NYT has lied, been slow or unwilling to retract obvious errors, and unwilling to tolerate the slightest dissent from far-left orthodoxy within their writing staff.

It is a mistake for anyone who considers themselves conservative to give access to the NYT.

Their words will be twisted and taken out of context. The NYT is not a news organ. They are part of the propaganda machine of and for the far left/deep state/Democrat party.

The writer from the NYT Magazine,  Jason Zengerle, takes care to set the stage by repeating the narrative the rowdy protest at the Capitol on 6 January was an “insurrection” and there was no “sweeping” fraud in the 2020 election. He claims Evan Hafer suspected fraud at first but was convinced there wasn’t any by the statement of the U.S. Attorney General, Bill Barr.

There is information from a former US attorney claiming Bill Barr told him not to look for evidence of fraud.

Zengerle then focuses on two incidents where he tries to show the BRCC as being tied to people the Left disapproves of.  Those people were wearing clothes with BRCC insignia on them. These include Kyle Rittenhouse and Eric Munchel, described as the “zip-tie guy” in the Capitol by Mat Best, the BRCC executive VP.

Zengerle goes out of his way to identify Hafer as Jewish. Zengerle writes this paragraph, which seems misleading at best:

“I would never want my brand to be represented in that way, shape or form,” Hafer said, “because that’s not me.” And yet Black Rifle has made conspicuously little public effort to separate itself from Munchel. This is a sharp departure from its handling of the Rittenhouse incident: Following pressure from the company, Schaffer deleted his tweets, and Hafer released a video statement in which he clarified that while Black Rifle believed “in the Constitution, the Second Amendment, the right to bear arms,” and “that a person is innocent until proven guilty,” the company didn’t sponsor Rittenhouse; “we’re not in the business of profiting from tragedy.”

Munchel was never connected with an ad campaign and a product code, as Rittenhouse was by Blaze TV. It is hard to see how BRCC stating they had not sponsored Rittenhouse and did not want to “profit from tragedy” in the Rittenhouse incident, can in any way, be similar to a protestor wearing some BRCC promotional gear, who has not been tried yet.

Here is a link to the video where Hafer is talking about the Rittenhouse incident.

At the end of the article, Zengerle cements his case for Best and Hafer as detesting their customers.

It is cleverly done. Here are two paragraphs from the NYT Magazine article:

“You can’t let sections of your customers hijack your brand and say, ‘This is who you are,’” Best told me. “It’s like, no, no, we define that.” The Rittenhouse episode may have cost the company thousands of customers, but, Hafer believed, it also allowed Black Rifle to draw a line in the sand. “It’s such a repugnant group of people,” Hafer said. “It’s like the worst of American society, and I got to flush the toilet of some of those people that kind of hijacked portions of the brand.” Then again, what Hafer insisted was a “superclear delineation” was not too clear to everyone, as Munchel’s choice of headgear vividly demonstrated.

“The racism [expletive] really pisses me off,” Hafer said. “I hate racist, Proud Boy-ish people. Like, I’ll pay them to leave my customer base. I would gladly chop all of those people out of my [expletive] customer database and pay them to get the [expletive] out.” If that was the case, I asked, had Black Rifle — which sells a Thin Blue Line coffee — considered changing the name of its Beyond Black coffee, a dark roast it has sold for years, to Beyond Black Lives Matter? Surely that would alienate the racists polluting its customer base.

Notice that Zengerle interweaves quotes from Best and Hafer, and implies they are talking about Rittenhouse supporters. The two quotes are separated by the sentence:

The Rittenhouse episode may have cost the company thousands of customers, but, Hafer believed, it also allowed Black Rifle to draw a line in the sand.

Zengerle does not give a transcript, so we cannot know what might have been said in between, or exactly what the context was. We know the NYT has a reputation for taking quotes out of context and weaponizing them.

Hafer, in a responding video, says he was exclusively referring to racists and anti-Semites. The comments were not directed at anyone else.

Link to the BRCC responding video. Here is a partial transcript from BRCC Evan Hafer:

There is a significant amount of misinformation being put out about Black Rifle and about statements that I have made.  And I think it is really important to get this directly from me.

Number one: the first and probably most important inaccuracy in any story published, is that I somehow made derogatory statements toward my customers, or conservatives. I will give you the context about this.

The actual conversation was taking place around antisemitism and racism in America. And then, our attack, because we were attacked last year by a group of very organized anti-Semites that we did not know and they were targeting me because of my last name and because of my heritage.

We were purely discussing that. I said anti-Semites and racists do not have a place in my company, and I would gladly tell them to leave; and pay them. So, that is what I was referencing, the context of the conversation was only about that. And I was never referencing conservatives or putting those groups together with conservatives, which I think is very important.

It is likely the writers at the NYT Magazine consider any Trump supporters, or customers of BRCC as racists, by definition.

This shows the futility of attempting to beat the NYT at its propaganda game, written by its own writers, published in its organs.

Prudent people would at least make sure they have a recording of everything which was said during interviews. It appears the BRCC did not do that. It may have been a series of conversations lasting hours, if not days.

This shows a dangerous naivete. The very name of “Black Rifle Coffee Company” is a gauntlet slapped across the face of the “woke”. The management of the New York Times appears offended by anyone who supports and defends traditional American values. Hafer and Black Rifle Coffee Company  picked a side by their existence. They need to realize it and accept it. They need to celebrate it and embrace it. They have done so in the past.

It isn’t about “conforming”, at least not to conservatives. It is about not surrendering to the Left and protecting conservative values.

Trying to play the middle will not work. Not when you are directly appealing to conservatives.

I suspect Hafer is very smart. He was a Green Beret, and a CIA contractor. He may expect to be the smartest person in the room. He might have thought he could play footsie with the New York Times and come out on top. Now he knows better.

At a minimum, he needs to be more careful of where he is getting his information flow. Accepting AG Barr’s word there was no significant voting fraud (if that is what he did) was a mistake.

This correspondent left a message with BRCC, asking to hear their side. There has not been a response in three days. No doubt, BRCC, and exec Hafer are very busy.