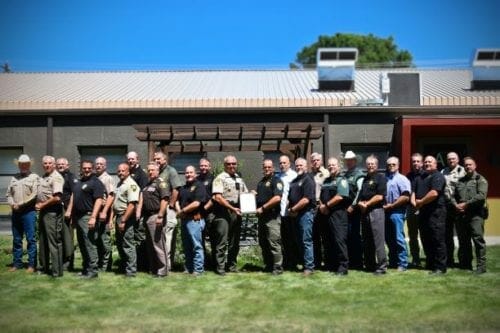 U.S.A. –-(AmmoLand.com)- County sheriffs in Washington State are sending a message to the State Legislature and Democrat Gov. Jay Inslee, telling state government with its Democrat majority they will protect the freedoms and rights of Evergreen State citizens, including their rights secured by the Second Amendment and the state constitution.

It’s a serious push back against the state’s Democrat-controlled Legislature, whose leaders have been promoting gun control measures for several years. Word of the effort leaked out to some local media, including KEPR News, but it did not become official until the Washington State Sheriffs’ Association (WSSA) officially released a statement Monday evening.

“We felt it would reassure people, not instill fear,” Burnett told AmmoLand. “People want to know who’s on their side, who’s got their back.”

“As your elected Sheriff, I pledge to do everything within my power to steadfastly protect the Second Amendment and all other individual rights guaranteed by the Constitution. I understand that the destructive influences currently existing in our country will only relent when men and women everywhere genuinely care for each other. In order to be a strong and prosperous people, we must rely on Providence, and care deeply about preserving the Constitution and its freedoms.”

A similar message, posted on Facebook by Benton County Sheriff Jerry Hatcher, states, “Importantly, the Second Amendment of our Constitution clearly states … ‘the right of the people to keep and bear Arms shall not be infringed. As Sheriffs, we recognize this inalienable right and swore to protect it. I feel strongly that the Second Amendment: the right to keep and bear arms, is indispensable to the existence of a free people.”

In their statement, the lawmen note, “As your elected Sheriffs, we individually and collectively pledge to do everything within our power to steadfastly protect the Second Amendment and all other individual rights guaranteed by the Constitution. We understand the destructive influences currently existing in our country will only relent when women and men everywhere genuinely care for each other. We must rely on Providence and care deeply about preserving the Constitution and its freedoms in order to be a strong and prosperous people.”

Since 2014, two anti-gun-rights initiatives—bankrolled by Seattle-based wealthy elitists with campaigns that financially overwhelmed grassroots opposition—have whittled away at the rights of law-abiding gun owners. As reported here by AmmoLand News, neither measure has lived up to promises that passage would result in less violent crime, especially gun-related homicides. Murders have gone up in the state, and more than doubled in Seattle since 2016, according to FBI and Seattle Police data.

Noticeably absent from the list of signatures is that of Sheriff Mitzi Johanknecht in King County. She has been under fire for months, from both the right and the left. In May, the King County Police Officers Guild called on her to resign. According to KING News, the Seattle-based NBC affiliate reported that a survey of deputies “found an overwhelming lack of trust and confidence” in the sheriff, who defeated former Sheriff John Urquhart almost four years ago. Johanknecht has refused to quit.

Last November, voters in the heavily liberal county changed the office of sheriff to an appointed position instead of an elected office. But her drama is a sub-plot to what amounts to a declaration of independence by the county sheriffs, the remainder of whom are elected to office by residents of their respective counties.

Gov. Inslee and Democrat Attorney General Bob Ferguson are gun control extremists who both supported the gun control initiatives and have pushed for a ban on so-called “assault weapons.” In 2018, Initiative 1639 actually invented a definition of a “semiautomatic assault rifle,” a weapon that Spokane County Sheriff Ozzie Knezovich has stated does not exist. Knezovich signed the statement.

The “assault rifle” definition applies to every self-loading rifle ever designed and manufactured, regardless of caliber, anywhere in the world. It even encompasses popular rimfire rifles including the Marlin Model 60, Ruger 10/22 and classic Remington Nylon 66.

The measure also stripped young adults in the 18-20-year age group of their right to purchase and own a “semiautomatic assault rifle.” The Second Amendment Foundation and National Rifle Association are challenging the law in federal court. They are joined by two firearms dealers and three members of the affected age group.

Frustration among the sheriffs is perhaps best explained by a line in Sheriff Hatcher’s message:

“In these unprecedented times, it is more important than ever we all stand together to protect our rights from the blatantly contrasted position of individuals with a special interest or political agendas.”