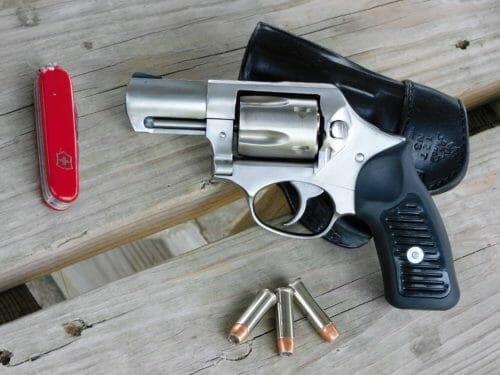 U.S.A. –-(AmmoLand.com)- The great progressive and regressive American president, Woodrow Wilson, was once quoted as saying that “Not all change is progress.” We don’t have to stick to his tenure in office or the arena of public life to know he was right. 2020 and 2021 has seen change and progress in equal measure in a time in which it should not with a sea of new gun owners and unstopping firearm sales in the face of production shortages. I would have guessed that gun makers and ammunition manufacturers would go all-in on producing their current line up and save research and development for better times. But I was wrong. In the all-important market for concealed carry handguns, 2021 has seen yet newer, lighter, higher capacity pistols come to market along with new ammunition to shoot in them–when you can find them on store shelves.

But I have always been of the opinion that newer is not always better and sometimes an older design can fit the bill. This is especially true for new gun owners and my quest to help one new gun owner led me to the Ruger SP101 in 357 Magnum. On paper, this stainless-steel five-shooter first introduced in 1989 makes no sense in the age of light-weight polymer and alloy framed guns that hold twice as much ammo. But in testing the SP101, I discovered a fighting pistol that performs out of category whose perceived negatives to some could be positives to others.

The Ruger SP101 was first introduced in 1989 as a smaller-framed version of the firm’s famous GP100. Both guns debuted with an eye toward law enforcement, but on the heals of the 1986 Miami-Dade shootout, peace officers began to transition away from revolvers toward automatic pistols. Despite its rough launch, the SP101 is still a tepid seller that comes in a number of different chamberings from 22 LR to 357 Magnum and barrel lengths ranging from 2 1/4 to 4 1/4 inches sporting either fixed or fiber optic adjustable sights.

Most SP101s available today are traditional double-action/single action guns with exposed hammers. In that configuration, the hammer could be manually thumb-cocked for a light trigger pull. Conversely, a revolver could be fired by simply pulling the trigger. I gravitated toward the double-action only (DAO) model without the exposed hammer.

This functionally bare-bones model has a loaded weight of twenty-five ounces and comes with a 2 1/4 inch bull barrel and fixed sights–a blacked-out pinned front ramp and a square rear notch milled into the top strap. The stock grips are over-molded rubber with two slotted polymer panels. Like all Ruger double-action revolvers, the SP101 has a push-button cylinder release and a shrouded ejector rod. Without the exposed hammer, the only way to fire the revolver is with a long pull of the trigger for every shot.

This version of the SP101 is chambered in the 357 Magnum cartridge, which also allows you to fire less powerful 38 Special ammunition.  Either caliber when put in a small handgun tends to produce a lot of felt recoil and muzzle rise–especially in lightweight scandium and aluminum framed guns.

The SP101 is entirely stainless steel and the brushed stainless finish is sure to remind you of it–though more recent additions of the lineup include blued steel versions. The revolver locks up like a bank vault, with the cylinder lock up accomplished by spring detentes in the cylinder yoke and in the recoil shield. There are a few sharp edges and casting marks around the yoke assembly, but the overall package on the outside is melted and well-finished. After a thorough tear down and cleaning, it was ready for the range.

I packed 38 Special target loads, 38 Special +P defensive loads, and a box of moderate magnum ammunition. I also brought my Smith & Wesson 442 Airweight for some much needed trigger time and to see how the SP101 stacks up against a more typical carry gun of its class.

While not a target gun by any stretch, I started my test with the Ruger SP101 by posting a few five-shot groups from seven yards using some lightly loaded Federal American Eagle 130 grain FMJ ammunition.

Loading the gun is done by pushing in the cylinder release button. The cylinder rocks out easily, but it is a little stiffer to get out than any Smith & Wesson. But once it is out, it is easy to check to see if the gun is loaded, and just so to drop in five rounds, close the cylinder shut and fire away. Recoil and blast was almost nonexistent.

Indeed, I induced more movement in the gun by pressing the trigger hurriedly in my out-of-practice way. Still, I could keep a 3-4 inch group at that distance without too much trouble. After that initial excitement, I posted a group with my 442 and got the same level of accuracy–but given these are my first shots with a Ruger while I have ten years of trigger time with Smith & Wesson snubbies, this was a good start. The learning curve is favoring the Ruger–certainly the stainless on black sighting arrangement helped me see my aiming point better. And I could also feel the difference. There was a bit more muzzle rise with the Smith, and a sting in the palm of my hand too.

I shot five-shot drills using the same ammunition on a steel torso sillouette back at ten yards. To help quantify control over the gun, I used a shot timer to see my timing between shots and how fast I could get off five rounds–all while hitting what I am aiming at. I could hit five for five in five seconds–the same with the Smith.

I stepped up to Speer Gold Dot 135 grain +P defensive hollowpoints and ran the same drill again. The Ruger had no noticeable recoil, but a lot more noise than the standard pressure load. The Smith was jumpier and I wasted precious time recovering a firing grip and lining up my sights. I could get five for five on target in six seconds with the Ruger. With the Smith, it took eight seconds. The better sights certainly helped the Ruger, but so did the trigger pull–which is long, but smooth. The trigger on the 442 is shorter but heavier.

If fast follow up shots are important, the Ruger is a winner. Where the Ruger also comes out on top on most snubbies is its chambering in 357 Magnum. I spent my last fifty-round box of LAX 158 grain FMJ Magnum loads shooting steel from ten to thirty-five yards. Recoil and blast are much more noticeable and the rubber grip digs into the hand, but I was under the impression that my ability to shoot the SP101 with Magnums rivaled what I could do with the 442 using 38 Special +P ammunition. Touching off heavy loads in a little gun could not be described as fun, unless it is in a package like this.

I continued to work with the SP101. I installed a MCarbo spring kit that reduced the trigger pull from nine pounds to six-and-a-half. This made for an even more shootable package with a trigger that is safely long, but glassy to run. With and without springs, the SP101 never failed to fire and after three hundred rounds downrange I came to appreciate a gun I thought I would never warm up to–a gun that is flawed on paper yet great in practice.

Small-framed revolvers are often dubbed as the gun for either an expert or a beginner–challenging to shoot well on one hand yet intuitive to operate. Small revolvers are touted as being easy to operate and more reliable than automatic pistols. Certainly, a simple press of a cylinder release is all that is needed to load and unload and firing only requires a press of the trigger. Revolvers do not rely on a certain grip or power of ammunition in order to function. This is certainly appealing to new gun owners, but excessive recoil, low ammunition capacity, as well as a long, heavy trigger pull clouds the picture. Far too many people have snapped up airweight revolvers and small automatic pistols only to find themselves disappointed in one way or another.

The Ruger SP101 DAO comes with a fairer trigger and its all-steel construction dulls recoil while retaining a small, carry-able package, allowing you to make your rounds count. On the other than, the more I worked with this SP101, the more I came to the conclusion that it could be a snubbie for non-shooters and shooters alike–though not necessarily broken down to the dynamic of experts and beginners.

The SP101 is an out-of-category shooter with a simple manual of arms–uncomplicated to use. Yet, it is also uncomplicated to store. The former is a factor often missed by those of us whose of us who take training classes and get plenty of trigger time. 2020 has certainly taught us that training and range time is not always a given. Shooting is a perishable skill–and in a way are the guns.

We can develop nasty shooting habits, but we can get sloppy when doing such things as: how to decock or safety check a handgun, how to clear malfunctions, and keeping up with basic maintenance items. In storage, a quality automatic pistol will probably be fine for a while. Still, loaded magazine lose spring compression, lubrication melts and pools in inconvenient places. Failure can be induced in the most modern pistols simply by neglect. A six month break from shooting has taught me that and it is a lesson that I have to admit was not the first.

The revolver, with its straightforward manual of arms, lack of compressed springs, and a relative insensitivity to lubrication will probably work if you need it. With this in mind, the Ruger SP101 starts to make more sense against the competition–as a surprisingly solid option for both shooters and non-shooters alike.

Terril Hebert is a firearm writer native to south Louisiana. Under his motto-Guns, Never Politics-he tackles firearm and reloading topics both in print and on his Mark3smle YouTube channel, where he got his start. Terril has a soft spot for ballistics testing, pocket pistols, and French rifles. When he is not burning ammo, he is indulging his unhealthy wildlife photography obsession or working on his latest novel. Scourge of God, published in 2017. See more from Terril on youtube under Mark3smle.