Taking Advantage of a Shift in the Landscape, Caniglia v. Strom 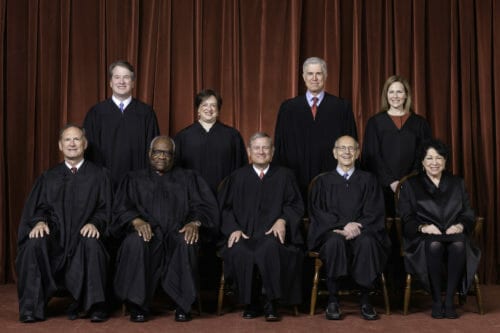 United States – -(AmmoLand.com)- The Supreme Court’s ruling in Caniglia v. Strom could be a boon to Second Amendment supporters concerned about so-called “red flag” laws. In a unanimous ruling centered on the Fourth Amendment’s protection against unreasonable searches and seizures, the Supreme Court has now offered the chance to, at the very least, force reforms in those laws, if not outright block them.

This brief opinion authored by Associate Justice Clarence Thomas – it runs a grand total of four pages – laid the smackdown on the First Circuit. The concurring opinions are also noteworthy, as they seem to set some boundaries on what “reasonable” searches in the home are.

For instance, the concurring opinion of John Roberts, often seen as “mushy” in recent years, laid out one set of possible exceptions, but those are focused on the need to provide assistance to someone who is injured, particularly the elderly. Associate Justice Brett Kavanaugh also cited that situation.

Justice Samuel Alito’s concurrence is also of note. While he also mentions the idea of a welfare check on an elderly homeowner, he almost went out of his way to note that “red flag” laws could be challenged under the Fourth Amendment. Granted, this concurrence is not controlling, but it does remind us of his concurrence in Caetano v. Massachusetts, another unanimous opinion that holds strong implications for the Second Amendment, which could easily be used to place modern multi-purpose semiautomatic long guns under the protections of Heller and McDonald.

In this case, Caniglia v. Strom is a potential game-changer: The NRA has opposed a number of “red flag” laws in the past, including one backed by Senator Marco Rubio. Many of the versions pushed by Bloomberg stooges lack basic due process protections. However, there are two pieces of harsh reality Second Amendment supporters must confront. First, the fact is that mass shootings are exploited by anti-Second Amendment extremists to attack our rights. Second, “red flag” laws are sold as a way to prevent those horrific acts short of gun bans.

So, what should Second Amendment supporters do? The first step is to challenge the loosest of “red flag” laws in court, citing this case. Given the lack of a dissent in this case, our hand in those legislative and legal battles is much stronger – you can’t beat a unanimous Supreme Court ruling. The next step is to work with those in office to strengthen the due process protections – taking an approach like Ted Cruz did in 2019.

The Supreme Court’s ruling has given Second Amendment supporters an opportunity by shifting the landscape on “red flag” laws. The recent grant of cert on another case could do even more, as would the Supreme Court deciding to hear a case from New Jersey, but the question will be whether we will capitalize on that chance.

The answer to that will depend on how the off-year and midterm elections turn out. That is why Second Amendment supporters need to support the NRA’s Institute for Legislative Action and Political Victory Fund to ensure that the current anti-Second Amendment regimes in the House, Senate, and White House and at the state level are defeated at the ballot box as soon as possible.

The post Taking Advantage of a Shift in the Landscape, Caniglia v. Strom appeared first on AmmoLand.com.