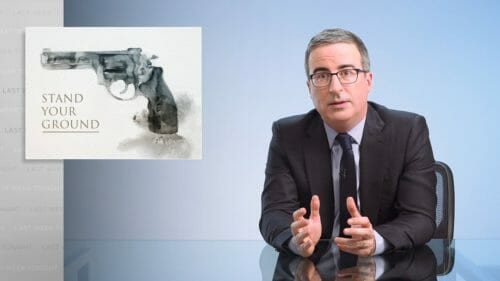 U.S.A. – -(Ammoland.com)- “‘Last Week Tonight’: John Oliver Rips Gun Laws That ‘Exalt A White Person’s Fear Over A Black Person’s Life,’” a Monday Deadline Hollywood promo piece masked as objective news claimed. The laws in question are commonly referred to as “Stand Your Ground,” and per the “woke” kneejerk lynch mob congregating in the “comments” section, anyone who questions the accusation is also racist.

“The stand-your-ground law was infamously used in the 2012 George Zimmerman case, in which a community watch shot and killed 17-year-old Trayvon Martin,” the report declares. “Zimmerman was successfully exonerated of wrongdoing after lawyers used stand-your-ground in his defense.”

There’s just one problem: That’s just not true. Zimmerman’s lawyer “argued basic self-defense law that would have been similar in just about every state in the nation,” a report by ABC News (hardly a champion of the right of the people to keep and bear arms) was honest enough to make known, further calling out:

“Many, including legal commentators who should know better, repeatedly citing the statute as a crucial issue…”

So, aside from lazy reporting and an unwillingness to challenge its own confirmation bias, what’s Deadline Hollywood’s excuse?

As an aside, don’t expect British import Oliver to ever tell his viewers that “blacks benefit the most from Stand Your Ground laws.” Per economist, and author John Lott:

“Blacks may make up just 16.6 percent of Florida’s population, but they account for over 31 percent of the state’s defendants invoking a Stand Your Ground defense. Black defendants who invoke this statute to justify their actions are acquitted 8 percent more frequently than whites who use that same defense.”

Oliver is a typical example of a foreign national who comes to this country to exploit the benefits of its economy while subverting the very freedom that allowed that economy to grow into an attractant for the rest of the world. Another is “comedian” Samantha Bee, a Canadian import reaping personal rewards from  “starring” in shows like “Full Frontal Wants to Take Your Guns.”

So much for the lie that no one is talking about doing that.

A common gun owner reaction to both Oliver and Bee: If they don’t like it here, why don‘t they go back to where they came from?

The answer you’ll get back: Because they became American citizens.

Kind of, but they hedged their bets.

“Bee became a US citizen in 2014 while retaining her Canadian citizenship,” a speaker’s bureau offering to send her to live events for $100K – $200K reveals.

And Oliver, “a dual citizen… is now the proud holder of two passports, ‘like Jason Bourne,’” the UK’s Independent recounted.

“Dual nationals owe allegiance to both the United States and the foreign country,” a State Department travel advisory notes. “It is important to note the problems attendant to dual nationality. Claims of other countries upon U.S. dual-nationals often place them in situations where their obligations to one country are in conflict with the laws of the other.”

Dual allegiances violate the Naturalization Oath of Allegiance to the United States of America, which clearly states:

Note the “noncombatant” pledge—an “exclusion” was created for the requirement to serve and/or to “bear arms on behalf of the United States” during the Obama administration, meaning new “citizens” can opt-out of defending the country. They also can affirm instead of swear, skip the “God” part and some are given a pass on the oath altogether because they don’t understand it due to “medical conditions,” which make it fair to wonder why it’s in anyone’s interests to make them eligible to vote.

“One of the goals of the globalists is to make everyone believe we are citizens of the world, not citizens of a particular country,” the late conservative leader Phyllis Schlafly warned almost 20 years ago.  “We are also beginning to hear more frequently about ‘dual citizenship,’ but that phrase is an oxymoron. One cannot truly be a citizen of two countries because ultimately loyalty cannot be divided.”

“Congress should put an end to this dangerous notion and tighten up the law on what constitutes evidence that a naturalized U.S. citizen intends to retain or to reinstate his loyalty to a foreign country,” she declared.

Don’t look for them to do that with Democrats (or cheap labor Republicans) in charge – their goal is to turn the “pathway to citizenship” into a superhighway.

Until things do change, foreign nationals intent on undermining our rights while they profit, foreign-born ingrates like Oliver and Bee, are living perversions of how John F. Kennedy (a president who understood the Second Amendment) urged Americans to live: