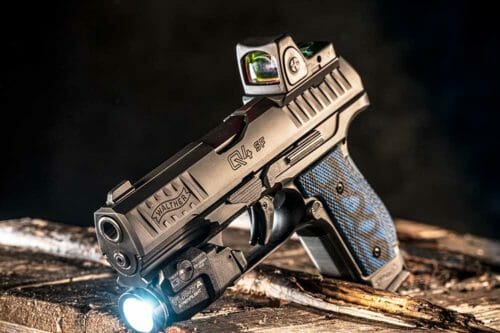 U.S.A. -(AmmoLand.com)- In a world dominated by polymer-framed handguns, the Walther PPQ Q4 stands as a parachronism or relic from a different time. The only thing polymer on the entire gun is the pair of grip panels – but there are even aluminum aftermarket options available should a shooter want their handgun to survive a zombie apocalypse. But short of longevity, why would anyone want a big, hefty all-steel 9mm semi-automatic pistol? Let’s take a closer look and find out.

The Walther PPQ Q4 is the steel-framed, compact version of the PPQ M2, which itself is the evolution of P99. For the uninformed, the P99 was Walther’s attempt to capture the polymer-framed, higher-capacity handgun market dominated by Glock. And while that P99 saw good success, not every aspect of it was well-suited for American shooters. Specifically, the magazine release lever is located on the trigger guard and operates very similar to those found on the H&K USP. And while perfectly functional, many shooters prefer the bush-button style release.

Which was one of the big design changes incorporated in the PPQ series that came out a few years ago. And while great guns, guys like me who love old-school, all-steel full-sized handguns were left with few modern options over the past few years. Especially if we wanted an all-steel gun from Walther. Thankfully, the engineers at Walther felt the same way, and three years ago introduced the Walther PPQ Q5 Match, and more recently, the compact version, the PPQ Q4.

The PPQ Q4 is a locked-breech, magazine-fed semi-automatic pistol chambered in 9mm parabellum. It feeds from stagger-column, 15-round steel PPQ M2 magazines (and includes two in the box), but original 17-round Q5 mags also fit. Coincidentally, Century TP9 magazines also fit, since that gun itself is heavily based on the Walther P99. The action on the PPQ M4 is incredibly smooth – like the feeling of chambering a round with a hand-fitted precision bolt-gun. The gun practically drips with quality.

The OP model features a fixed front sight post and a rear notch which is fully adjustable for both windage and elevation.

Other notable features including an elongated, but subdued slide release for super-fast reloads without accidentally dropping the slide and an oversized magazine release that makes dropping spent mags easy for shooters of all sizes.

And despite being the only polymer component on the gun, the PPQ Q4’s grip panels are as effective as they are futuristic-looking. Walther refers to the texture as their Performance Duty Texture, which in layman’s means a cluster of molded polymer scalloped pyramids that despite being very aggressive, don’t destroy gloves or damage a shooter’s hands.

Basically, it’s a near-perfect balance of grippiness and comfort. For comparison, it’s similar in feel to a 5th-generation Glock, but in my experience functions better when wet or oily.

The PPQ also features the patented Quick Defense Trigger, which in practice is just a buttery-smooth trigger with a crisp clean break and very little takeup, and an incredibly short reset. So much so the engineers at Walther claim the reset measures a scant 0.10 inches. And while I can’t scientifically confirm this as my calipers couldn’t quite measure that small, it feels almost non-existent; like the trigger almost automatically resets during the recoil impulse.

Speaking of which, felt recoil on the hefty Walther is just a little bit greater than that of a .22lr handgun. Sounds crazy, but given the gun’s 40-ounce overall weight and 9mm chambering, makes perfect sense.

Yes, the Walther is definitely much heavier than any polymer-frame handgun. After all, the entire gun is made of precision machined steel. What’s incredible, is that despite this weight, the gun is perfectly balanced. And don’t worry, I’m not blowing smoke up your rear, the gun is very heavy, and holding it on target for more than a minute gets tiresome in a hurry. But because the balance is so solid, it feels like holding a full-sized 1911 with the recoil of a Ruger MK III. And it only takes a quick trip to the range to realize just how much it tames recoil. In testing, I found the PPQ Q4 so quick-shooting, that clearing a plate rack under the ever-watchful eye of a PAC Timer was effortless.

In fact, it was refreshing to not have to worry so much about recoil control when racing against the clock. I simply had to focus on the fundamentals of trigger control and sight picture.

Ready to Be Kitted

But the Q4 is more than just a steel-framed PPQ, it features a match-grade 4-inch barrel and a cut at the rear which facilitates mounting a miniature optic like a Trijicon RMR or Holosun 507c. Additionally, the dust cover features an accessory rail perfect for mounting lights or lasers, making the gun well-suited for home defense or competition. But what about the fact that it’s a ‘compact’ model of the Walther PPQ Q5 Match? Is it suitable for concealed carry?

Well, size-wise, yes. The PPQ Q4 isn’t a very large gun, roughly a little bit larger than a Glock 19. But it’s certainly not a purpose-built concealed carry gun like SIG’s P365. But size isn’t the issue. The 40-ounce weight of the Q4 would make carrying the gun all day fairly tiring, and requires the shooter to have a high-quality heavy-duty gun belt. But I suspect that Walther didn’t necessarily design this gun for concealed carry so much as for the Carry Optics division of USPSA, where I would imagine the gun would totally dominate in the hands of a proficient shooter.

But I’m dancing around the meat of this review – how the gun performed. Well, there’s a reason for that.

The first 50 or so rounds felt like any other steel-framed semi-automatic pistol. Having spent a good amount of time behind my Browning Hi-Power, I wasn’t surprised by the soft-recoil of the all-steel pistol, but I was taken back by the accuracy and ultra-smooth operation. But then something strange happened. The gun just clicked in my brain. I altered my grip ever so slightly, and the PPQ Q4 went from having minimal felt recoil to zero. It sounds like marketing hype, but with the action so smooth that the unlocking almost feels like a direct blowback pistol, the recoil impulse is very constant, yet minimal.

And when combined with a quality micro-reflex sight like the Holosun 507c X2 ACSS, I could maintain a proper sight picture on my personal steel plate rack from 15 yards throughout an entire magazine. Something about the heavily scalloped beaver-tail grip angle and heavy frame made the gun feel like it fought recoil for me. Seemingly recentering itself on target without me having to muscle it back in place. Almost like when I ran a friend’s STI race gun with hand-loaded ammunition!

What’s more, is that I have been running this gun for a little under a year, and in that time I’ve put 1,350 rounds of various types of 9mm through it. During that entire time, I’ve never cleaned the gun once, and it has never encountered a single malfunction of any type – even when I used modified Beretta 92 magazines and Canik TP9 mags. The gun just runs like a Swiss watch!

And if you thought that was great, the gun was also exceptionally accurate. When firing from my Lyman Bag Jack sandbag, the Walther was capable of two-inch groups at 25 yards when paired with an optic! While long-gun guys might scoff at an eight MOA gun, that’s outstanding with a pistol running non-match-grade ammo. For those of you on a budget, I also tested Monarch and Tula steel-cased El Cheapo ammo, and these rounds still grouped around three inches at that distance – which again is very solid. I also suspect that if I were to utilize a more scientific testing method like the old Ransom Rest, I probably could shave a few tenths of an inch off those groupings as it would totally eliminate human error.

So, is the Q4 worth a buy? Well, with an MSRP of $1,499, the Walther PPQ Q4 OP is not the sort of gun a shooter buys on a whim. It’s too expensive for the average Joe to simply pick up at Academy if he’s in need of a home-defense or range-plinker. But just because the gun is expensive doesn’t mean that it’s overpriced. After all, the Q4 is a precision-machined, all-steel gun made entirely in Germany. And realistically, those words are never followed by, “affordable” or “budget-friendly”.

That said, if a shooter wants a high-end, all-steel pistol designed for competition and hard use that also includes all the features modern shooters expect from handguns, the Walther PPQ Q4 OP stands alone. Plus, with all the COVID relief checks coming in, why not? It’s all fiat currency anyway.