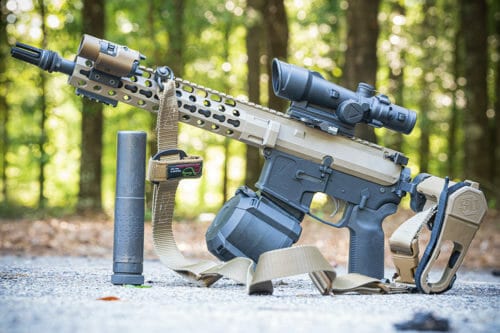 U.S.A. -(AmmoLand.com)- Once you’ve been in the gun industry long enough, you start to get jaded with marketing hype and seemingly fade products like folding stock AR-15s. But it’s important to keep an open mind, since many things that seem like a passing fade end up becoming staples of the industry. One such product is the 17 Manufacturing and Design Integrated Folding Lower Receiver.

If the new folding receiver seems somewhat familiar, you’re likely thinking of the Law Tactical Folder. While the two accomplish the same end result, the biggest difference between them is that the 17 Design and Manufacturing is integral to a lower receiver, whereas the Law adaptor is just that, an adaptor for an existing lower.

So why go with an integral design over an adaptor? Well, for starters, the 17 M&D lower can safely be fired with the stock folded. Though the owners of the company warned me that prolonged fire in that condition will eventually damage the BCG retainer in the rear, it’s still a great feature.

Because if you’re using the lower as a bugout weapon and it’s folded in a backpack, you might not have quite enough time to fully unfold it before an attacker is on top of you. The good news is that if you fire it folded, the only real downside is that you’ll have to recharge the action to extract the spent casing and rechamber another.

Another reason to go with the integrated folding lower is a shorter overall length. And since the entire point of the folding mechanism is to reduce the overall size of the gun for transportation, smaller = better.

The 17 Manufacturing and Design folding mechanism is pretty straightforward. It doesn’t utilize a camming lock or anything, but just a simple hinge with a spring-loaded latch to keep the hinge closed when folded. That said, it does use a small plunger that pushes down a bolt carrier group retention tab when the gun is folded. This is due to the fact that without said tab, the bolt carrier could stick out the rear of the gun and make it impossible to fold. This leads me to one of the only propriety components of the 17 folder – the buffer.\

While the buffer spring is a simply carbine-length one, the buffer itself is slightly elongated to compensate for the extra length the folding mechanism adds to the rear of the receiver. The good news is that the lower includes this special buffer, so shooters don’t have to buy one.

The other special component deals

with the buffer retention plunger. On a standard AR-15, the plunger is retained by the buffer extension threading into the receiver blocking it from popping out. Since the 17 Manufacturing Integral Folder separates the extension from the lower due to the folding mechanism, the company instead uses a small hex screw underneath the plunger to keep it in place.

More Than Just a Folder

Like the header says, the lower is more than just the folding mechanism. It’s also a billet machined lower that includes some great features for shooters. For example, the bolt release roll pin has been replaced with a machined screw so shooters assembling the lower don’t have to worry about accidentally scratching the receiver while driving a pin in. Instead, they simply need to utilize an Allen key to screw it in place. Another nice feature is the integral trigger guard, which does away with the need to purchase one while keeping the lines up the lower itself clean and consistent.

Due to cost and availability issues with ammo, I only had a chance thus far to fire a few hundred rounds through my 17 Design and Manufacturing lower, but thus far I’ve encountered no issues whatsoever. Every magazine tested works fine and locks up and drops free with no issues. The small parts kit from Brownells that I used to complete the lower fit with no issues whatsoever.

Also, in testing, every upper installed on the folding lower fit flawlessly with one minor issue when paired with a 7.5in barrel PSA pistol upper in 5.56mm. In that instance, the two fit together fine, but the forward push pin was tight enough to require a tool to push out for disassembly. That said, uppers from BCM, LaRue Tactical, CMMG, and Springfield all fit perfectly fine.

With an MSRP of $299, the Integrated Folding Lower isn’t cheap, but it’s still a solid deal. Especially when compared to the cost of buying a standalone billet lower and a separate folding adaptor – the latter of which is often $250 by itself. Overall, I’m impressed with the lower and really only would to add one thing to it to make it perfect – a locking mechanism to keep it folded. But if a shooter is only folding the stock or brace for transportation purposes, it doesn’t really matter.