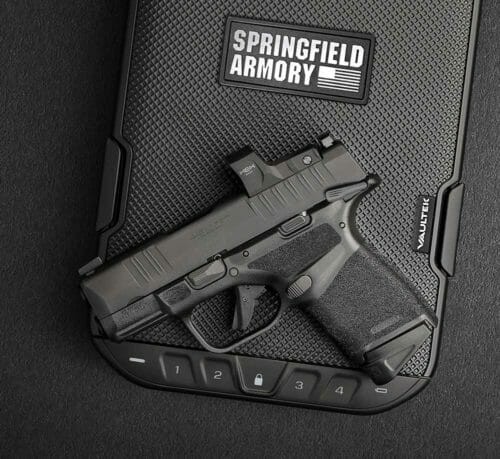 “We feel that these claims are frivolously litigious in nature and designed to thin out the competition in an increasingly crowded firearms market,” explains Springfield Armory President Steve McKelvain. “Springfield Armory will vigorously defend its right to produce the class-leading patented Hellcat® handgun and magazines for our loyal customers––past, present and future.”

Springfield Armory is proud of its 46-year long commitment to innovative engineering, craftsmanship, and design. The work completed on behalf of our customers and the public is a privilege that we honor with originality and the release of groundbreaking products including the Hellcat.

In 1794, the original Springfield Armory began manufacturing muskets for the defense of our young, free Republic. The Armory functioned as a firearms supplier for every major American conflict until 1968 when the government sadly closed its doors. In 1974, nearly two centuries after its inception, Springfield Armory Inc. in Geneseo, Ill. revived the iconic heritage of the Armory to carry on its legacy.

We strive to honor this responsibility as guardians of the original Springfield Armory legacy by manufacturing the highest quality firearms to enable responsible citizens to preserve their right to keep and bear arms in the defense of life, liberty and the pursuit of happiness.

With an unmatched emphasis on craftsmanship, performance and exceptional customer service, our mission is to forge superior firearms and provide the tools necessary to defend individual freedoms and equality for those who embrace the rights and principles secured by our Founding Fathers. For more information, please visit us at: springfield-armory.com.