Texas: ATF, NSSF Offers Up to $10,000 Reward on a String of Recent Burglaries 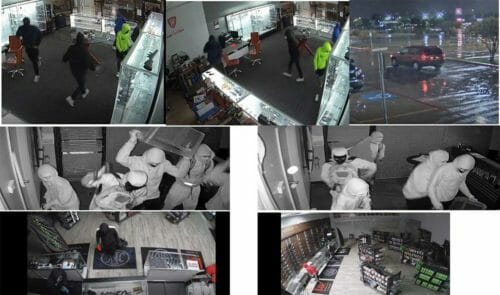 Dallas – -(AmmoLand.com)- The Bureau of Alcohol, Tobacco, Firearms and Explosives, and the National Shooting Sports Foundation (NSSF), have announced a reward of up to $10,000 for information leading to the identification and/or arrest of the suspects responsible for the burglary and theft of multiple firearms from Elliot White Gun Co, Republic Arsenal and SK Arms.

During each robbery the suspects tried to conceal their identity by wearing masks, hoods and gloves.

“We at ATF ask the public to help us solve these serial burglaries. Every day that these stolen firearms remain on the streets it increases the chances of them being used in a violent crime. If you know something, please say something” said ATF Dallas Special Agent in Charge Jeffrey C Boshek II.

Anyone with any information about this crime should contact ATF at 1-888-ATF-TIPS. Information can also be sent to ATFTips@atf.gov, through ATF’s website at www.atf.gov/contact/atftips.

The reward is part of a larger national cooperative initiative between the NSSF and ATF, in which NSSF matches ATF rewards in cases involving the theft of firearms from federally licensed firearms retailers. ATF works closely with members of the firearms industry to curb the criminal acquisition and misuse of firearms.

ATF is the lead federal law enforcement agency with jurisdiction involving firearms and violent crimes, and regulates the firearm industry. More information about ATF and its programs is available at www.atf.gov.

The post Texas: ATF, NSSF Offers Up to $10,000 Reward on a String of Recent Burglaries appeared first on AmmoLand.com.