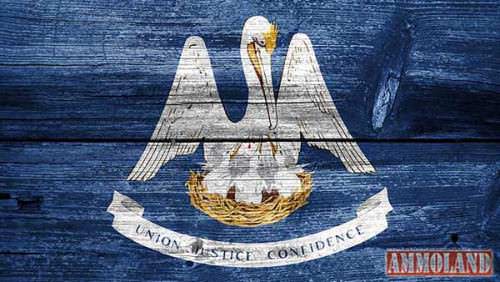 U.S.A. –-(AmmoLand.com)- Governor John Bel Edwards, a Democrat, has said he will veto any Constitutional carry bill that arrives on his desk. From apnews.com:

BATON ROUGE, La. (AP) — Gov. John Bel Edwards indicated Thursday that he will use his veto pen to strike down a bill that would remove the requirement that gun owners have a permit to carry concealed firearms, if the proposal reaches his desk.

HB596 has advanced the furthest in the House, passing the Committee on Criminal Administration and Justice, amended, 8-4, with one member not voting.  The amended bill would limit Constitutional Carry to Louisiana residents over the age of 21 and forbid the use of controlled dangerous substances or a blood alcohol level of .05 or greater while carrying a weapon.

Persons carrying concealed weapons would be required to notify police officers who approach them and submit to a pat-down.

Representative  Danny McCormick, R-Oil City has sponsored HB16. HB16 would restore Constitutional Carry for everyone over the age of 18 who could legally own guns. HB16 would echo the current limitations of open carry in Louisiana. People who open carry in Louisiana are not required to notify police officers. There is no prohibition on alcohol levels in HB16. No committee vote on HB16 has been scheduled.

The Louisiana House has 105 members. 67 are republicans, 35 are Democrats and 2 are independent. 70 votes would be needed to override a veto. Only two vetos have ever been overridden, according to an article in the Advocate.

It is unknown how many House members would vote for a Constitutional Carry bill in Louisiana. The bill would be a relatively small, incremental, restoration of the right to keep and bear arms in Louisiana. Louisiana already has open carry rights without any requirement for a permit.

Governor Edwards’s promise to veto Constitutional Carry in Louisiana much reduces the chance of passage this year.

There may, or may not be enough votes in the House to override a veto. The historical record indicates the chances are small.

However, Constitutional Carry legislation has been moving forward rapidly in 2021. Four more states, Utah, Montana, Iowa, and Tennessee have all passed Constitutional Carry bills into law. A Texas bill has passed the House and will be debated on the Senate floor. Governor Abbott has said he will sign it.

There have not been any measurable increases in either accidents or suicides.