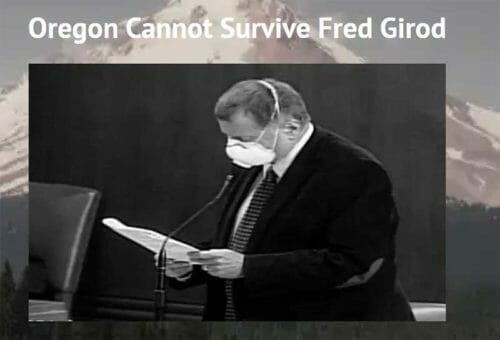 Oregon – -(AmmoLand.com)- After months of watching Republican “leadership” roll over for the Democrat supermajority in the Oregon Legislature, some folks had enough.

As you may have heard, a recall campaign has begun against Senate Republican “leader” Fred Girod.

Under Girod, the Senate Republican Caucus has been fractured and two Senators have officially left it in disgust.

Dangerous anti-gun legislation has passed the Senate because Girod refused to stand up to the Democrats and managed to convince 5 other Republicans to join him in the sell-out.

Since then we have learned that each Republican Senator has been offered 4 million dollars to spend as they like in their districts. Now the reasons for the sell-out are becoming clear.

The damage Girod has done to Oregonians and his own caucus is incalculable. As the state slips further into chaos and people and businesses continue to be crushed, Girod continues to hand victory after victory to the Democrats.

Oregon cannot survive Fred Girod. If you live in Girod’s district or know someone who does, please consider helping remove Girod and replacing him with someone who cares more about Oregon than himself.