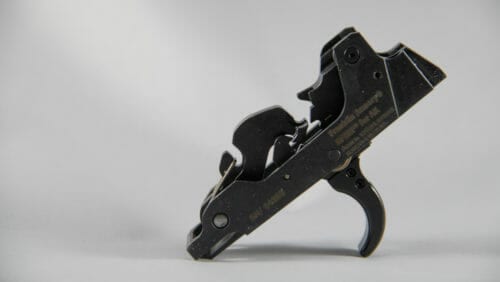 I have Franklin Armory binary triggers in a few of my AR15s, and I even have a Franklin Armory trigger in my CZ Scorpion Evo 3. That was fun to shoot until ammo prices went crazy. Then it was not so much fun, but that isn’t on Franklin Armory. That is on panic buying and new gun owners.

I was excited when I saw that Franklin Armory released a trigger for AK-type firearms. I have tons of 7.62×39 ammunition, so my blood started flowing. Around the same time, Franklin Armory asked if I would try out their BFSIII AK-C1 trigger. That is like asking a fat kid if they would like candy. Hell, yeah, I would!

Franklin Armory sent out the trigger, and I selected one of my AK variants for the project.

I picked my Lee Armory M10 AK. Before we get into the trigger, I have let you know that Lee Armory is currently my favorite affordable AK brand. Lee Armory does a hell of a job building AKs. If you are thinking about buying a Century AK, stop! Check out Lee Armory. Your dollar goes a lot further, and quality is a lot better with the Arizona-based company.

When I got the trigger, I quickly checked to ensure I had everything I needed to install the trigger. Replacing an AK trigger is a lot different than replacing a trigger in an AR15. With an AR15, you remove two pins, pop out the old trigger, and drop in the new one. With an AK, you deal with springs on other things. The ease of working on an AR15 is why the rifle is known as “Legos for adults.”

The trigger went in pretty easy, even if it was a little more complex than the AR15 trigger. I will say it was easier than my Scorpion. I have a Gen 1 Scorpion, which means the old trigger pack screw was wielded in, and I needed to drill out the screw. After that, the install was easy.

I don’t think people will have too much trouble installing the trigger, even though Franklin Armory recommends taking your firearm to a gunsmith. There are tons of guides on the Internet that walks users through replacing the old AK trigger. Even though this is the first time I swapped out an AK trigger, it still was pretty easy. Within a few minutes, the old trigger was gone, and the new trigger was in the rifle and ready for testing.

This binary firing doesn’t mean that the rifle becomes a machine gun. The definition of a machine gun is that the gun fires multiple shots with a single action (and a piece of plastic attached to the butt of the rifle. Unless you live in Ohio, Michigan, Kentucky, or Tennessee). Since the shooter has to release the trigger, binary mode is still considered semi-automatic. The ATF isn’t likely to go after binary triggers until the bump stock thing is settled in the federal court system.

For testing, I used a mixture of Wolf and TulAmmo. I also reached out to my friend Matt of Verso Armament Company to get my hands on a fully automatic AK to compare it to my “fully semi-automatic” AK with the Franklin Armory binary trigger installed. I know it isn’t a fair comparison, but it is an excuse to dump some rounds down range with a machine gun and write it off as a business expense.

I wanted to see if we could outrun the bolt and jam up the Lee Armory AK. For full disclosure, I never had a malfunction with this AK in the past. That reason was why I chose to install it in the most reliable rifle that I have ever owned. I was about to find out if I made a colossal mistake installing the trigger into the gun.

For the testing, we used XTech magazines in both the machine gun and my Lee Armory rifle. They aren’t the cheapest, but these aren’t your “range only” magazines. They are damn near indestructible. Just ask MAC! Plus, when we tried another brand of magazines in the full-auto AK, we couldn’t get them to run correctly.

We fired a full magazine in the traditional semi-automatic setting to function test the trigger. The rifle planted all freedom seeds without any issues. Now it was time to step it up a bit. I dumped two mags without any problems. I would have loved to go through a few more full mags, but I have to ration ammunition with the ammo shortage.

Now it was time to step it up. If you buy a Franklin Armory binary trigger, you aren’t purchasing it for its traditional semi-automatic mode. I fired the rifle. Two shots! No issues. I pulled the trigger again and sent two more rounds downrange. I repeated this for the rest of the magazine. I was about to repeat the action with a second magazine, but then I remembered the ammo shortage.

It was time to dump some magazines. We grabbed four full magazines, and we decided to I would dump two and Matt will dump two. What I wanted to see is if I could outrun the bolt. When I worked with another company’s binary trigger in one of my AR15s, I outran the bolt and locked up the rifle. I never was able to get the Franklin Binary trigger to outrun the bolt on my AR15s or my CZ, so I wanted to see if we could “break” the AK.

I dumped the first magazine without issue. Every round went down the barrel. I pulled the trigger as fast as I could but no malfunctions. I changed the magazine as quickly I could and sent 30 more rounds downrange. Everything went off without an issue.

I passed the Lee Armory rifle to Matt, who admittedly has more experience with rapid-fire than I do. Most likely due to the fact he owns over 20 machine guns. He pulled the trigger as fast as he could and not a single malfunction. After a quick magazine change, he continued to fire. The rifle and trigger remained flawless.

After putting 180 rounds down range without a failure, I can say from the limited testing the Franklin Binary trigger worked great. Usually, for testing, I like to use around 500 or more rounds spread out into two trips, but once again, we had to modify the testing parameters because of the ammo crisis.

One cool feature is that the user can cancel the second shot by holding back the trigger for a few seconds. That feature is on all Franklin Armory Binary triggers currently on the market. It is a nice safety feature that I think needs to be highlighted.

We decided to break out the machine guns to compare the two. We did a few mag dumps with the rifles. Although the Franklin Armory BFSIII AK-C1 is an excellent trigger, it doesn’t turn a rifle into a machine gun, but it does have a few advantages over a machine gun. For one, it doesn’t require a long wait period to get the “ATF’s permission” to own it. The second is that the AK it is installed in can be a non-cold war relic. The final reason is that it only cost $499.99 plus the price of an AK. The machine gun we used for the comparison was offered to me for $18,000. I can’t do that and remain married.

Overall, the Frank Armory BFSIII AK-C1 is a great trigger. It isn’t a machine gun, but it is still a hell of a lot of fun. Right not there is a 16-week backorder, but it is worth the wait.

To find out more, check out this link.