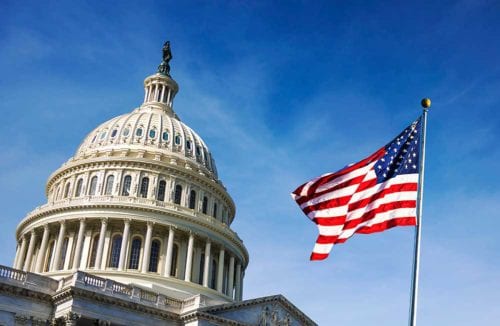 U.S.A. –-(AmmoLand.com)- An official with the gun prohibition lobbying group “March for Our Lives” has acknowledged his group expects action on gun control for having worked to elect an anti-gun Congressional majority and president.

Quoted by Politico, Max Markham, identified as the March for Our Lives policy director, reportedly stated;

“We didn’t work so hard in 2018 and in 2020 to elect a progressive Congress and White House to see nothing.”

As noted by Politico reporter Nicholas Wu, “Democrats control all of Washington, and their frustrated base wants to get something done by any means necessary, filibuster be damned.”

What would be the reaction from the establishment media if an official with a gun rights organization said the same thing in the event of a Republican election victory?

Remarks by two House Democrats during a press event in front of the Capitol as they called upon the Senate to end the filibuster while pushing for D.C. statehood essentially confirmed Markham’s observations.

Rep.Cori Bush (D-MO), according to Fox News, asserted Democrats were elected to Congress “with a mandate to transform this society” and that Republicans are blocking legislation including “common-sense gun control,” whatever that might be.

Rep. Jason Crow (D-CO) insisted Americans don’t care about Senate rules, but what they do care about is “ending gun violence” and other policies, Fox News reported.

The Politico story centered on anti-gun Democrat Senator Chris Murphy, who has crusaded for restrictive gun control in the aftermath of the Sandy Hook school shooting more than eight years ago. House Speaker Nancy Pelosi (D-CA) was also quoted for observing at a gun control rally at the National Mall that “We will have (gun control) legislation because of Murphy’s persistence.”

But thanks to the Senate’s 60-vote requirement to pass such legislation, it may be easier said than done. This is obviously frustrating House anti-gunners.

Politico noted in its report, “Many influential gun control groups are pressing for changes to the filibuster before anything else, seeing the Senate’s 60-vote threshold to pass most bills as the main obstacle to progress.”

“The Fix Our Senate coalition calling for the elimination of the filibuster includes gun control groups like Brady: United Against Gun Violence and March for Our Lives,” the Politico report continued. “A spokesperson for the bigger coalition, Eli Zupnick, said there was ‘no chance of meaningful gun safety legislation’ with the legislative filibuster intact.”

This is happening against the backdrop of a National Rifle Association under siege [some say for good reason]. An ongoing trial in federal bankruptcy court in Dallas—reported by the New York Times—has turned into something of a spectator sport. The Times recently portrayed testimony provided by NRA Executive Vice President Wayne LaPierre as an admission he had kept the NRA’s filing for bankruptcy earlier this year “secret from almost all its senior officials, including its general counsel, chief financial officer, and top lobbyist. He also did not inform most of the N.R.A.’s board.”

In the same story, the Times said NRA “has been enmeshed in scandal for the last two years, with revelations of lavish spending by the N.R.A. and its contractors — on Zegna suits and luxurious trips Mr. LaPierre took to places like Lake Como in Italy and the Atlantis Resort in the Bahamas. Other benefits included chartered jets for him and his family and vacations on a contractor’s yachts, which were named Illusions and Grand Illusion.”

Bloomberg News covered testimony from Judge and AmmoLand News contributor, Phillip Journey, a member of the NRA Board of Directors, in which the former Kansas lawmaker said NRA under LaPierre, “essentially operates as a kingdom rather than a corporation.” The testimony was also reported by the Wall Street Journal.

NRA is trying to end its incorporation in New York State and reincorporate in Texas. New York Attorney General Letitia James sued NRA last August in federal court, seeking to dissolve the organization, which was incorporated in the Empire State in 1871.

This publicity may suggest to some the NRA is in disarray and distracted. That impression is shared in a USA Today Op-Ed in which Ross K. Baker, a political science professor at Rutgers and member of the newspaper’s Board of Contributors lamented that gun control is “a lost cause.”

“The brief flicker of hope that somehow the financial problems of the National Rifle Association, and the profligate spending of members’ dues by one its top executives, might stifle the effectiveness of the opposition to even the most modest efforts to control firearms or reduce their lethality became an iridescent dream,” Baker wrote, “and seemed to prove that the organization itself was never much of a factor in blocking gun-control legislation.”

That may have been a “brief flicker” indeed. Fox Business is reporting the organization is preparing to spend up to $2 million in a push back against Joe Biden’s campaign to ratchet down on gun rights. Biden had promised gun control action during the 2020 campaign, and now he appears ready to deliver. NRA obviously intends to thwart him.

According to the Fox Business story, NRA will target at least a dozen states with television and digital advertising, mailings, outreach, and town halls. That doesn’t suggest NRA is distracted but is instead focused on a strategy.

As reported previously by AmmoLand News, two other gun rights organizations—the Second Amendment Foundation and Citizens Committee for the Right to Keep and Bear Arms—have already launched national television advertising efforts on more than a dozen networks. SAF pushed the “2A First Responders” project while CCRKBA has focused on House legislation and will refocus on Sen. Dianne Feinstein’s latest attempt to ban so-called “assault weapons.”

So, instead of rolling over, gun rights groups are coming out swinging.

The gun prohibition lobby’s expectations of congressional action on guns is now facing serious speed bumps, and what may have seemed like a window of opportunity to place further limits on Second Amendment rights may be gradually closing as politicians are already looking ahead to 2022 and the mid-term elections. If Republicans can recapture Capitol Hill, it could stop the Biden-Harris gun control agenda cold, and send a message to the gun prohibition lobby they will remain a “frustrated base” for the increasingly left-tilting Democrats.