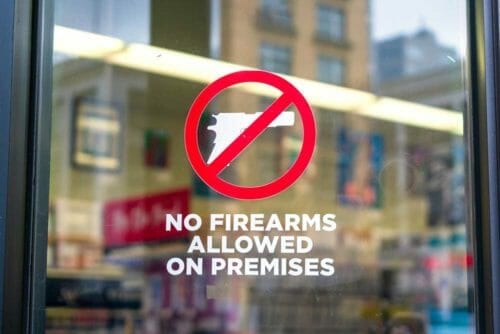 U.S.A. –-(AmmoLand.com)- On April 17th, 2021, at about noon, there was a shooting at the Westroads Mall in Omaha, Nebraska. One person was killed, another was wounded.  A police officer had been shot at in the Mall a month earlier.

The Westroads Mall is reported to be a gun-free zone. When the shooting happened on April 17th, 2021, Scott Tafoya was carrying his pistol with a Nebraska permit. He drew the pistol to protect himself and others, knowing there might be legal consequences.

“Every indication said our lives were in danger and I was going to do everything in my power to make sure we got out of there OK,” Tafoya said.

He’s a legal conceal carry permit holder, even though Westroads Mall is a weapon-free zone.

“I knew that if I ever pulled that out it would truly be a life and death situation and I would deal with the consequences later,” he said.

As Von Maur employees shuttled shoppers into a bathroom, he stood guard.

He said he stood near the escalators to draw any threat away from where his family was.

“Everyone else on the third floor just got added into that because the best way to keep my family safe was to make sure nobody with ill intentions came up that escalator.”

When the police came to investigate the shooting and provide security, he unloaded his pistol placed it in his holster with the slide locked back, and approached the police with his hands up. The police told him to leave, and have not charged him with any offense, yet.

In 2007, a mass murderer killed seven people and himself on 5 December, using a stolen Century WASR-10 (AKM clone) rifle.

Nebraska had become the 48th state to allow for legal concealed carry, in January of 2007.  There were probably very few permits issued in the first year. The permit fee was $100, and two sets of fingerprints had to be taken by the Nebraska State Patrol. The application for a Nebraska permit requires photographs.

To be charged with illegally carrying at the mall, the Nebraska legislature requires a prominent notice be posted, or a request be made in person to remove the handgun from the premises. From nebraskalegislature.gov:

In the various images of entrances to the Westroads mall in Omaha, this correspondent did not notice any prominent signs prohibiting concealed firearms.