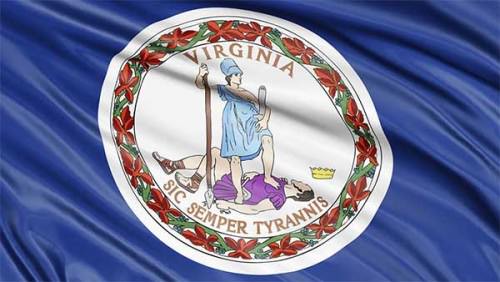 U.S.A. -(AmmoLand.com)- Once predominantly farmland and pastures, Loudoun County, Virginia, is now home to planned communities filled with countless government contractors and bureaucrats. It also regularly has the highest median income of all counties in the nation. The county Board of Supervisors enacted gun control as soon as the anti-gun legislature in Richmond authorized such local efforts. The county school board has been mired in self-made controversy, but the latest Loudoun County incident is a direct attack on the Second Amendment.

Claire Gallagher, a social science teacher at Tuscarora High School in Leesburg, is shown injecting her own groundless gun control extremism into her high school civics class in a video released by a Virginia political advocacy organization.

Gallagher is delivering a new assignment to her class: to copy the 2nd Amendment, to rewrite it in their own words, and to explain how it affects them. In the context of explaining the assignment, the teacher belittles Supreme Court decisions and makes her anti-gun position crystal clear to the students who are supposed to be learning civics.

The civics teacher suggested to her students that the relevancy of Supreme Court decisions is somehow based on the number of dissenting justices and went on to blame the millions of law-abiding gun owners in this country for the actions of a small number of disturbed criminals who attack their own communities.

Gallagher says, “Hear me now. If I read, ‘The 2nd Amendment allows me to have a gun,’ I’m taking that and I’m crossing it with an X. That is not what the 2nd Amendment says.”

Well, hear us now. That is technically correct, although the civics teacher likely won’t appreciate our fact check as reality conflicts with her misguided worldview.

The 2nd Amendment does not “allow” Americans to “have a gun;” it affirms the natural right to keep and bear arms. That right existed long before the Bill of Rights and the 2nd Amendment was included to preserve the rights of the people, not to bestow upon them a new right, and to clearly limit the power of the government.

We doubt that answer would get a passing grade on Gallagher’s assignment. It would, however, get an A+ if graded against the text, history, and tradition of the right to keep and bear arms.

But the Loudoun County civics teacher describes cases including Heller in disparaging terms. She says, “The 2nd Amendment has been interpreted in recent – very recent – and very controversial court cases, with split decisions in the Supreme Court that say that people can have a gun. That is not – that is how the Supreme Court has interpreted the 2nd Amendment. That is not putting the 2nd Amendment into your own words.” The transcript doesn’t reflect her emphasis in the video.

The Supreme Court has been consistent on 2nd Amendment rights. The 2nd Amendment was confirmed by the United States Supreme Court in the District of Columbia v. Heller decision in 2008 to be an individual right and applied the right against state action in McDonald v. Chicago in 2010.

The teacher continues describing the assignment and asks students to write about how the 2nd Amendment impacts them and “a lot of high school students across the country.” Nearly ten seconds of silence elapses until she continues by asking, “if we were in school what kind of drills would we be having?”

Gallagher blames the 2nd Amendment for lockdown drills. “You are still affected because we have to do this lockdown drill every year, multiple times because we live in a society filled with guns.”

American society has always had a large population of law-abiding gun owners. Blaming firearms for lockdown drills ignores the very real factors that contribute to mass shootings and the long history of the positive effects of focusing on the criminals.

After leading her class toward the answer she so obviously prefers and telling them flat out what would be marked with an X, Gallagher ends by saying, “When you are putting the Amendment into your own words all you’re doing is reading it without any extraneous views or opinions or whatever coming in on you.”

Any extraneous views or opinions except hers, that is. One might think that a public school teacher would not begin an assignment by telling her students which answers she would immediately reject – seemingly to include those consistent with the United States Supreme Court precedent – but the concept of compelled speech is an altogether different issue one could raise with Gallagher.

A brave student stood up for individual rights and shared this video to expose the patently false claims being made about the 2nd Amendment by an obviously unqualified civics teacher. Schools were once bastions of free speech that promoted critical thinking. Claire Gallagher is not the first activist to use her lectern to promote her own materially wrong beliefs, and she likely won’t be the last.

The good news is that this brave student does not stand alone. The NRA and our millions of members will not let such reckless indoctrination go unchallenged. If you know of any other teachers who subject their classes to unfounded anti-gun talking points, please share your story with us.