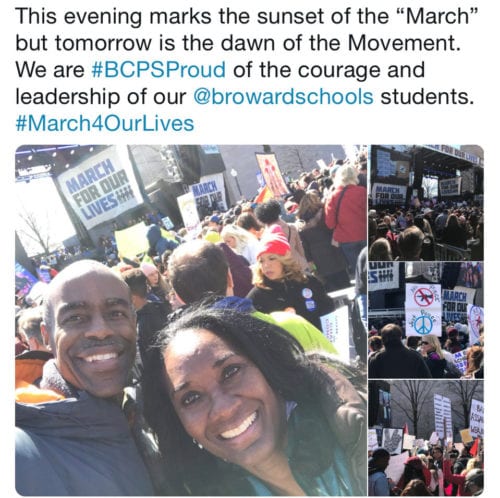 U.S.A. – -(Ammoland.com)- “The superintendent of the Florida school district where 17 students and staff died in a 2018 high school massacre was arrested Wednesday after investigators said he lied to a grand jury investigating events surrounding the shooting,” ABC News reported Wednesday. “Broward County Schools Superintendent Robert Runcie was arrested by the Florida Department of Law Enforcement at district headquarters and charged with perjury in an official proceeding, which is a felony punishable by up to five years in prison.”

While specifics about what Runcie is alleged to have lied about under oath have not been released at this writing, it’s instructive to note the grand jury investigated “whether districts are following school safety laws, including those implemented after the … slayings at Marjory Stoneman Douglas High in Parkland.” That includes  seeing if state safety grants have been used for designated purposes, determining if millions of dollars in bond money raised for school safety have been misappropriated by Broward school officials, and ascertaining if “Runcie and district administrators have [lied] about school crime rates and discipline problems.”

If found guilty, it won’t be the first time there’s been a documented disconnect between what Runcie said under oath and how he then wielded the power entrusted to him.

Per the Constitution, Article. VI., “[A]ll executive and judicial Officers, both of the United States and of the several States, shall be bound by Oath or Affirmation, to support this Constitution.” Per Florida law, that includes district school superintendents. For any official, including politicians for that matter, to infringe on the right of the people to keep and bear arms is an absolute betrayal of their oath, but realistically, were that something that was acted upon, there would be no one left to turn off the government’s lights.

“Following the [Parkland] shootings, Runcie aggressively interjected himself into the legislative fight on the Second Amendment – and he has a First Amendment right to express his opinion,” Forbes observed in a 2019 report that didn’t take his sworn position into consideration, but that nonetheless offered clues into why a grand jury inquiry was triggered in the first place. “However, taxpayers have a right to ask whether their money is being wasted on unnecessary travel, lobbying activities, perks, and a super-sized salary.”

At a time when we’re told how underfunded public schools are, in addition to lots of travel to attend “posh” conferences and being away from his desk a full seven weeks in 2018 alone, Runcie has reportedly “earned” (and I put that in quotes for a reason) “approximately $6.1 million from his hire date in October 2011 through the 2022/23 school year. Just three months before the tragedy, Runcie received a six-year contract extension worth an estimated $3.5 million in cash and benefits. It was an estimated $1 million increase over his previous six-year pay package.”

As for job performance worthy of such a deep and overflowing trough, Andrew Pollack, who was appointed to the Florida State Board of Education in 2019 and whose daughter Meadow was murdered at Marjory Stoneman Douglas High School, doesn’t think so. According to WLRN Public Radio and Television, he said his first priority would be removing Runcie.

“Pollack’s primary indictment of Runcie is the fact that a staff member who was recommended to be fired for inappropriate behavior toward female students was the first to spot confessed shooter Nikolas Cruz at Stoneman Douglas on Feb. 14 and failed to raise alarms,” the report notes. “Pollack is convinced Runcie’s so-called ‘PROMISE’ program contributed to his daughter’s death … The program offers students who commit certain misdemeanor crimes at school alternatives to arrest, like counseling or substance abuse.”

That’s putting it mildly, as a 2018 investigative report by “independent writer, documentary producer, and media consultant” Jack Cashill demonstrates. Per his website bio, Cashill “has a Ph.D. from Purdue University in American studies, has taught media and literature at Purdue and at Kansas City area universities, and served as a Fulbright lecturer in France.” So naturally, Media Matters and other apparatchik interests that don’t want to see his work known and heeded try to discredit him by labeling him a “conspiracy theorist.”

Through a collaborative agreement with the NAACP and law enforcement, the Broward County School District would deal with crimes administratively as a way to offset minority students being “disproportionately” arrested and prosecuted, he documents. So pervasive was the top-down pressure that “whistleblowers told of cases of burglary and robbery where officers had to hide the recovered evidence in order to avoid writing up the students for criminal behavior.”

Results of such deliberate misrepresentation included Trayvon Martin, caught with “stolen female jewelry and a burglary tool [who] had his offense written off as entering an unauthorized area and writing graffiti on a locker.” And then there was Parkland killer Nicholas Cruz, who had reportedly been involved in “23 incidents before the shooting,” smoothed over by the same school resource officer, Scot Peterson, who hunkered down in personally armed safety while those he was paid to protect were being slaughtered.

Back to the perjury charges Runcie now faces his lawyers filed a motion to dismiss or specify the charges on Monday. Curiously, since much of the PROMISE program Runcie collaborated in involves restraining police and giving the “disenfranchised” a break, principal attorney Michael Dutko crows on his website about how he got an officer acquitted in a “homeless slapping case” and got two officers acquitted in a misconduct case that could have resulted in life sentences.

Meanwhile, the obligatory gaggle of noisy “community leaders,” representing very few followers with $6M contracts and the ability to retain top criminal defense firms like Dutko & Kroll, are publicly pledging “100% support” for Runcie and calling the charges against him a political “witch hunt.”

Whether Runcie is guilty or innocent will be revealed.

That’s why due process and rigorous adherence to Constitutional protections by those in power are so important. And that’s why his demands for due process-denying prior restraints and infringements on the right of the people to keep and bear arms is so hypocritical.

It would be ironic indeed, if Runcie is convicted, to note that as a felon, he will become a “prohibited person,” forbidden by “law” to possess the guns he would deny to those of us who aren’t trough-feeding perjurers.

The post Runcie Getting Chance at Constitutional Justice He Would Deny to Gun Owners appeared first on AmmoLand.com.