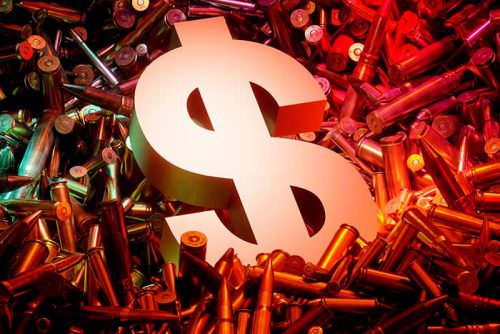 Oregon – -(AmmoLand.com)- As Oregonians have watched their state descend into a hellhole of mindless lockdowns, business failures, skyrocketing suicide rates, and unchecked (and condoned) mob violence, many have wondered how this could happen.

How could the “Republicans” who were elected to stand up to this madness roll over, again and again, and allow the left to ram through policies guaranteed to bankrupt small business owners, eliminate freedom of speech and assembly, steal people’s property, and crush the spirit of our children?

And now, of course, turn the most law-abiding Oregonians into criminals.

SB 554, which passed out of the House Rules Committee will send Oregonians to prison for going to an airport, visiting their child’s school, or daring to enter the Capitol Building where Antifa and black lives matter rioters are welcome.

It will hold gun owners responsible for crimes committed with guns that were stolen from them and prohibit you from allowing your trained 17-year-old daughter from protecting herself when you are not home.

(Don’t be confused by the section that talks about “lawful self defense” that still does not allow you to let your minor child have access to a firearm.)

As rational Oregonians scratched their heads and googled “moving vans” the answer to the Republicans sell-out finally became clear.

And to everyone’s astonishment, it was all about…money.

Four million bucks for Senators, two million for House Reps. Money from the benevolent hand of the feds (yes, your money) to do with as they damn well pleased.

Really, sending a bunch of hillbilly gun owners to prison and neutering the police is a pretty small price to pay for that kind of loot.

That was the deal made by the Democrats to buy off the Republicans and get them to stick around… and stick it to you.

And according to House Republican leader Christine Drazan “It was important, but I also think that the important thing is we figured out ways that we could work together generally,…That happened to be one where we could find some agreement.”

Yes, working together suddenly becomes a lot more attractive when you are handed a large pile of cash with almost no rules.

Peter Courtney, the Democrat Senate President said “We decided to shoot the moon, shoot Pluto…These are the times that require these kinds of daring, risky actions.”

And hell, if all it takes to get the Republicans to sell out the people who elected them is a bunch of money from the Feds, why the heck not? Peter does not like shooting generally, but some interplanetary target practice with money from Washington ain’t so bad.

It would explain the rude and dismissive responses from Fred Girod’s office when gun owners called asking that he stand up for their rights.

(4 million bucks is a nice sum for a guy whose house burned down in fires that exploded due to demented Democrat forest policy.)

It would explain why House Reps like Bill Post, who never missed an opportunity to have his hand out to gun owners when he thought the money would increase his stature in his caucus, would use his Twitter feed to ridicule gun owners and mock a recall effort. (“…these are not Republicans sending threats. They are gun guys who for the most part don’t vote nor contribute to the party. They’ve never been active in the party.”)

“Drazan said that the budget proposal floated by Courtney and Kotek was one key to breaking a logjam in the House, where Republicans had insisted until last week that all bills be read in full before a vote.”

That kind of money can certainly look like a lot of votes come election time. If there are any Republicans left to vote for you after your policies force most to leave the state.

So there you have it. A windfall of money from the feds, fleeced from the taxpayers, greases the skids to a new harmony in the Oregon Legislature. And all it cost was freedom, dignity, and your rights.