Is Hunting Becoming Too Expensive or Too Inaccessible? 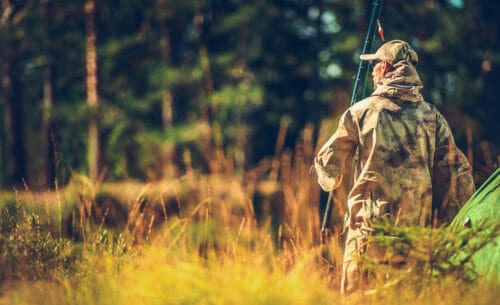 U.S.A. -(AmmoLand.com)- In days of centuries past, hunting once was reserved for the nobility. In Europe, royal forests, off-limits to the average peasant were protected by law, and the only way to hunt game was to take it at the risk of one’s life. It even became perfectly legal in some instances for landowners to shoot poachers dead, and in England getting caught hunting in the King’s protected forest lands was punishable by death by hanging. One of the promises of the New World was that it was teeming with wildlife, and for many years it seemed as though it was a resource without end, but trapping, market hunting, and the policies of wiping out the bison to help starve Native American tribes on the plains as a military tactic almost caused the extinction of many game species. At the dawn of the 20th Century, the Lacey Act was passed, which made it illegal to take game in one state to sell in another. Various states had their game laws passed establishing hunting seasons and bag limits, thereby ensuring that there would be animals to hunt for future generations.

Fast forward to 2021, and while hunting, as popular as ever in many places, seems to have gotten away from being the sport that used to belong to the common man. In many states, public land has gotten to be the only place many hunters can even attempt to try and take any game, as private land, once belonging to farmers or those who had an open mind to allowing hunters who acquired permission to use it have been replaced by those who have moved from more urban settings or are just being bought as more and more industrial expansion swallows up what used to be open spaces. Those who have moved from the cities have no desire in many cases to allow anyone to hunt on their land, and posted signs that once used to be rarely seen, are now in so many places on every fence post or tree for miles and miles.

Here in the Adirondack Mountains of New York, hiking on state-owned land is extremely popular and as such has resulted in the overuse of many trails, which makes it extremely hard for hunters to use the land together. In 2020, the New York State Department of Environmental Conservation had to put out a public statement, aimed at those hiking on state land, that they needed to share it with those who wanted to use it during hunting season. I can tell you that there are public lands that I have hunted on previously that became so overrun during deer season, that it was nearly impossible to safely be on them with the number of hunters crammed onto them.

For those thinking of taking a trip out of state to hunt for elk, moose, or even large whitetail, the cost of one of those hunts has gotten to the point that most hunters, again the common man looking to simply fill the freezer for the winter, hasn’t got a chance of actually being able to go on one of the many hunts he or she sees on the outdoor channels, that often too many times make it look so easy to do. Even if you were to travel across the country on your own without a guide to bring you to the best place to bag that big game, you would need airfare, a hotel and then you would need to process and find a way to get all that meat back home. When so many are struggling just to make ends meet at all, it’s not surprising why so many hunters get turned off watching outdoor shows where the host travels to some of the nicest hunting spots in North America or even the world while they are struggling to make their car payment and hoping they can get a few days off to get into the woods this coming season.

On top of all the ever-shrinking land problem, trying to find the time and place to hunt, most new hunters think they have to have the very best gear, top of the line in every respect to even be able to take that whitetail they’ve seen a couple of times out scouting. There almost seems to be no encouragement to those getting into the sport telling them that there’s nothing wrong with buying a used rifle instead of a new one that only costs a few hundred dollars, or that instead of the top-of-the-line scent reduction clothing and state of the art camouflage, that they can get by with a pair of woodland pattern BDU’s from the local Army-Navy surplus store. If you look at so many advertisements and articles out there, it would seem that unless you spend at least a thousand dollars on the rifle and a couple hundred more on the scope, your chances of bagging that animal are about as good as a snowball lasting through the day in Hades. The point has been to try and get new people interested in hunting, not scare them off with sticker shock and discouragement.

There is no reason for any hunter to spend so much money on a gun, especially their first gun. To this day, I have never killed a deer with a gun that I bought brand new and in fact, most are older than I am. A few years ago, I shot a small whitetail doe with a sporterized Swedish M96 Mauser that I picked up for only a couple hundred dollars. That deer didn’t know that it hadn’t been shot by a gun that wasn’t new or wasn’t state of the art and it sure didn’t change the way the meat tasted that helped my family get through the winter. The first gun I ever owned that I bought when I was 18 years old was a surplus British Enfield .303 that I paid a whopping seventy-five dollars for. It shot straight well out to distances past 150 yards with those open sights. For almost twenty years now I’ve been shooting the same Remington Model 33 single-shot .22 LR with an old Weaver 3-6 scope on it. Sure, there are better, more modern, flashier rifles out there, but this one works, and I paid a hundred dollars for it and twenty for the scope that’s on it now. That gun is pushing ninety years of age with no signs of slowing down.

Hunting was once only a sport for the rich and powerful. A sport of kings and nobles, where the average man was kept away, his only recourse to break the law and risk life and limb. Now we live in different times, but in more than one state, the land to hunt on is getting less and less easy to find, the land being bought up and those who have it are not about to give out permission for hunters anymore in so many instances. The cost to book a hunt at a ranch is quickly turning for many to be a once in a lifetime affair, certainly not what the average, everyday meat hunter is looking for or could ever possibly afford when he’s trying to pay bills and put money away for their kid’s college fund.

On top of that throw in the constant bombardment of the mentality that you need the latest and greatest hunting gear along with the most expensive gun on the rack and new hunters can get discouraged quickly, scaring them away from a sport where new blood is desperately needed. We need to get back to the roots and traditions of hunting, remember that while there are so many hunting shows where it seems that antler size rules the day, there are still millions who do it because they want to put the meat away for the winter to help feed their families. It’s not just a hobby for a lot of hunters, in some cases it’s a necessity and in any case, it shouldn’t break the bank or makes it impossible to be enjoyed.

The post Is Hunting Becoming Too Expensive or Too Inaccessible? appeared first on AmmoLand.com.