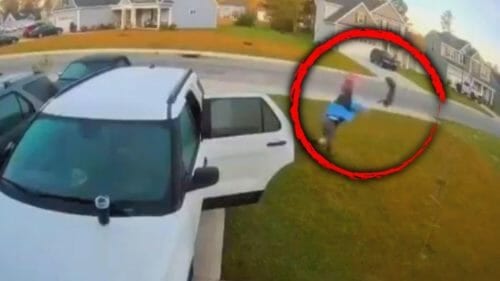 U.S.A. –-(AmmoLand.com)- On Friday, 9 April, 2021, Happy and Kristi Wade were going about a normal morning routine, as shown by their security video. Happy can be seen setting a cup of coffee on the hood of his car, and placing a box of sweets in the back seat.

His wife Kristi comes out. She hears a cat growling. She takes a step back, and a bobcat attacks her from behind. Screaming, she darts between the two family vehicles, with the bobcat biting as it climbs up her back.

Her husband, Happy, comes to her aid.  She turns around, and he grabs the bobcat off of her as it nears her neck.

Holding the cat above his head, he suffers three bites until he throws the cat across the yard. After throwing the cat, he draws his concealed pistol, pursues the cat, and shoots it to prevent it from attacking another neighbor.

Later, it is reported the cat had previously stalked a different neighbor, earlier that morning. From wdbj7.com:

WECT reported, Kristi received a number of puncture wounds, scratches and was bitten several times. Happy is then seen grabbing the bobcat and carries it away onto his front lawn.

“I just remember seeing this face and it was trying to bite her right there in the side of the neck,” Happy said. “And so I shoved my arm in and that’s how I ended up with it like this [above his head].”

Happy said he was bit by the bobcat three times before he was able to throw it.

“I thought: ‘I’ll throw it this way,’” Happy said. “Two options: one, it’ll see an escape route and it’ll take off or it’ll stop just a moment where I can get a good shot at it.”

In the comments at the video, Tyrone Power writes:

You cannot get more American than this. Nowhere else in the world would there be a suburb with both a bobcat and an armed husband to defend his wife.

Happy Wade shows himself as a good citizen, good husband, and armed warrior/protector, all in a few seconds.

Attacks by rabid bobcats are relatively rare. They happen a couple of times a year.

Healthy bobcats have been known to kill small deer, as was documented with pictures from a trail camera.

Bobcats have adapted well to the suburbs. This correspondent has seen one in Dallas, and my daughter has seen a few over the years she has lived there.

Stories such as these give another meaning to those sightings.

All of the bobcat attacks this correspondent has read of involved either rabid bobcats or mistaken identity attacks on hunters who were using animal calls to attract predators.