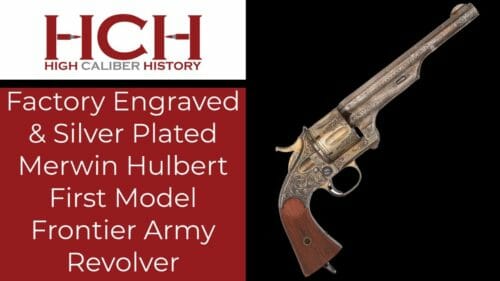 USA – -(Ammoland.com)- Made for just two years (1876-1878), the Merwin Hulbert First Model Frontier Army Single Action Revolver is an interesting gun for a variety of reasons.

So while the revolvers are Merwin Hulbert designs from New York, arms manufacturer Hopkins & Allen actually made them in Connecticut.

This is because Joseph Merwin, who was an established arms designer, formed a partnership in 1868 with William and Milan Hulbert, who owned a 50% interest in Hopkins & Allen. The partnership was supposed to be a sort of match made in heaven between a maker and a marketer, but the guns they produced never lived up to their potential.

So why aren’t they better known?

Instead of being marked Merwin Hulbert, they’ve got a roll mark on the barrel that says Hopkins & Allen. Unfortunately, Hopkins & Allen were regarded as a company that produced cheap guns of inferior quality. This couldn’t be further from the truth with Merwin Hulbert guns. Many in the gun community think that they would likely have been able to be serious contenders with the likes of Colt, Remington, and Smith & Wesson had it not been for the stigma around the Hopkins & Allen name.

The company developed a nickel plating process that was unrivaled in the industry and even ended up being cheaper for them to make than blued guns. They were also some of the most rugged and solidly made guns of the era.

A key innovation of theirs was the rotating barrel design. When rotated 90 degrees, the barrel and cylinder could be pulled forward to remove the fired cartridge cases. Any unfired cartridges would remain in the chamber due to the additional length of the bullet.

The tight machining tolerances would create a vacuum when the barrel and cylinder were pulled forward, causing the assembly to ‘suck back’ closed when released. While some examples have been used hard and are no longer as tightly fitted today as they were when made, it’s still possible to find Merwin Hulbert revolvers that will close themselves even after 150 years.

The company’s engraved models featured an embellishment known as “punch dot” engraving, referred to in Merwin Hulbert catalogs as “Intaglio Engraving.” Scrolls, borders, and designs such as flowers were crafted via a pattern of tiny dots made by a punch-like tool tapped with an engraver’s hammer. It created a striking form of adornment that cost a fraction of the incised type of coverage seen on high end guns from Colt, Winchester, and Smith & Wesson.

This particular example is really cool, being both factory engraved and silver plated. She’s showing some honest age and silver oxidation, but it’s still a beautiful gun. It would have been a true showstopper when it was new! Because the brand is not as well known as its contemporaries, they’re not as widely collected. If you’re looking to get a great collectible revolver that your gun buddies have never seen before, then a Merwin Hulbert is a solid option.

This gun is part of the May 2021 Arms & Armor sale from Lewis & Grant Auctions, and it could be yours!