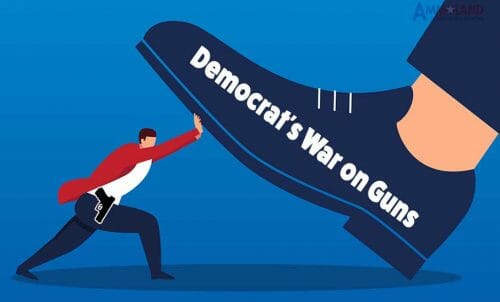 USA – -(AmmoLand.com)- The fabricated “epidemic of gun violence” is “so severe and so desperate”, and the need “to take action” to address it is so urgent, that Democratic politicians from Joe Biden to Chuck Schumer to Nancy Pelosi to state representatives, mayors, and city council members are using gun control as a lever to try and force the destruction of the Senate filibuster.

Of course, there’s not an “epidemic of gun violence,” and the tragedies that these politicians are using to justify their calls, would not – could not – have been prevented or mitigated by the gun control laws they are pushing. But why let reality get in the way of a good crisis? And it’s not that these politicians don’t know that they’re blowing smoke. They know all too well. They know that the proposals they’re putting forward are “mostly symbolic,” but that doesn’t matter to them, because they have other proposals waiting in the wings. They know that “gun crime” had plateaued in recent years after falling steadily for almost 3 decades. It only surged up over the past year, almost exclusively in large, Democrat-controlled cities, after politicians told police to stand back and let rioters and looters have their way, then turned around and slashed police budgets. The vast majority of the US has violent crime rates comparable to, or lower than, the UK or most European countries.

But crime isn’t the issue. Control is the issue, and the Democrats want total control.

If Democrats can take out the filibuster, killing the only tool already weak Republicans have of keeping a one-vote majority from riding rough-shod over them, they have no intention of settling for the “modest,” “reasonable,” “commonsense gun safety reforms” that they’re currently touting. Sure, they’ll pass deadly “red flag” laws (that abridge due process and compromise at least the Fourth and Fifth Amendments along with the Second), “universal (sic) background checks” (that criminalize private transfers and create a gun registration framework), and restrictions on “ghost guns” (that is gun parts), but then they’ll keep going.

They’ll not only prohibit the manufacture and sale of “assault weapons” and normal, or what they call in their world, “high-capacity” magazines, but they’ll also prohibit their transfer and possibly ban their possession altogether, requiring that they all be turned in or destroyed. California already passed a total ban on possession of “high-capacity” magazines, but that confiscation law has been blocked by the courts so far.

This isn’t some crazy conspiracy theory or the Chicken Little hype that comes from too many gun rights groups in their fundraising letters. This is over 40 years of experience researching, debating, and writing about gun control and politics, reading the current situation, and clearly seeing the true objectives.

Democrats are literally power-mad. They believed that they had a permanent lock on the strings of power back in 2016, but the American electorate disabused them of that mistaken notion. They then pulled out all the stops in 2020, managing to secure a narrow victory that many people still question, but they’re determined to lock up their hold on power this time no matter what.

The filibuster is all that stands between them and permanent control in Washington.

Once the filibuster is gone, Democrats will add DC and Puerto Rico as new states – with 2 new Democratic senators each – and they’ll add 4 more seats to the Supreme Court to negate the current conservative majority. Then, with a solid majority in both houses, they’ll push through more and more gun control. With a blatantly political Court to do their bidding, we’ll see Heller neutered, and every gun control scheme currently in the legal pipeline declared to be constitutional.

The Protection of Lawful Commerce in Arms Act will be repealed, opening the door for cities, states, and special interest groups to resume their war on gun companies using a weaponized judiciary to drive the civilian arms industry into bankruptcy.

Cap it all off with major new immigration reform, granting citizenship to the millions of people currently in our country and still pouring in illegally, and Republicans will lose any hope of ever regaining the majority in either house.

This is what Democratic leaders are currently pushing for.

What they intend to do with that consolidated power is genuinely frightening.

There was a time that Americans could identify as Republican or Democrat, “conservative” or “liberal,” “right” or “left,” and still genuinely believe that the United States of America was a special place worth preserving. The Republic was Reagan’s “shining city on a hill,” or Kennedy’s “Camelot,” founded on Jefferson’s “unalienable rights,” that despite its flaws, contradictions and tragedies, had firm principles to aspire and rise to. There was a time that Americans of every mainstream political stripe agreed that those principles and aspirations were something worth defending, even fighting and dying for.

Something has changed. Sometime in the past twenty years – maybe even less – the American consensus has faded to be replaced by ideology owing more to Marx and Engels than to Hume and Locke. (Do most Americans under 50 even know these names, aside from Marx?)

We like to think that even the most strident Democrat wants our nation to continue and our people to be prosperous and happy, but looking at what they are trying to do, and the lengths they’re willing to go to in order to get what they want, it’s hard to envision anything less than a repeat of the mistakes and failures of the USSR, played out right here in the USA.

This isn’t hype or bluster. This is clearly what Democrats are trying to do, and they’re getting closer every day.

There are currently just two or three Democratic Senators objecting to the idea of deleting the filibuster, but it’s quite possible that they could fold or a Republican or two could make a deal and jump the aisle, giving Dems the simple majority they need to change the rules. If that happens, the writing is on the walls. Remember the push for Obamacare back in 2010. Nancy Pelosi’s statement that “we need to pass the bill so we know what’s in it,” and the tremendous pressure brought to bear to get their caucus in line in support of the bill, in spite of massive protests at the Capitol and in state capitols around the country.

That was only a warm-up for what’s going on right now. This is the biggest opportunity Democrats have seen since Lyndon Johnson convinced them that they could lock up the black vote by passing the Civil Rights Act, even though it betrayed the founding principles and history of their party, and meant they’d have to publicly turn their back on their direct action wing, the KKK.

I have to admit that I’m stumped as to what the average Democrat thinks America should or could look like with this bunch of power-crazed vultures in total control, but I can pretty much guarantee that it won’t go well.

It’s easy to talk about banning certain guns and accessories, but enforcing such bans is a much bigger challenge. So I ask Joe Biden, Joe Manchin, Kyrsten Sinema, and the rest of the DC elites: How many Americans are you willing to kill or incarcerate for failing to comply with gun laws that have been shown to not actually save lives?
How many Americans are you willing to see killed or incarcerated for one too many rounds in a magazine?

How many police officers are you willing to see killed or wounded trying to enforce laws that are “mostly symbolic,” but which millions of Americans believe are blatant violations of their God-given and constitutionally guaranteed rights?

The political divide is deep and getting deeper. Trust in the election process is almost completely destroyed. The balance of power in DC teeters on a single vote, making it very hard to advance any agenda. Rather than following the American tradition of working to build support for their ideas, and thus gain the majorities needed to advance them, Democrats are choosing to try and change the rules and rearrange the board.

Putting forward better ideas and selling those ideas to voters in order to win more seats in the next election, thus allowing you to advance your agenda, is just too slow, old-fashioned, and risky for this current crop of Democratic leaders. They demand change. Now. And they will justify any action that puts them on top. Many Republicans respond almost as poorly, by making ridiculous and unsubstantiated claims and engaging in the same sort of “Hooray for Our Side!” politics that the Democrats are guilty of.

Both the radical Democratic leadership and the benighted “business as usual” GOP establishment are playing with fire. Neither side seems to understand that pushing people to the extremes will breed more extremism. The radical Democrats want to defund the police and expect those same police to protect them and execute their gun confiscation orders. They turn a blind eye to “mostly peaceful” protests that burn cities down while expecting their Antifa shock troops to intimidate veterans of real wars of insurgency.

For its part, the GOP establishment whistles in the dark hoping they can make a deal with people who clearly intend to bury them.

By looking the other way, the establishment has given an opening to the fringes of their own parties. The investigations that should rightly be a bi-partisan affair have become the province of only conspiracy theorists. Meanwhile, guns are flying off the shelves, and ammunition isn’t even making it to the stores.

We seem to be living under the old Chinese curse: “May you live in interesting times.” Perhaps men and women of goodwill on both sides will join hands across the political aisles. Perhaps the American Experiment will emerge from this crisis stronger and more resilient and with better safeguards for life, liberty, and the pursuit of happiness than ever.

For now, the spoiled children have taken over the school and they’re doing their best to lock the doors to keep the adults outside. It’s tragic and terrifying.

Pray for the Republic. And keep your powder dry.