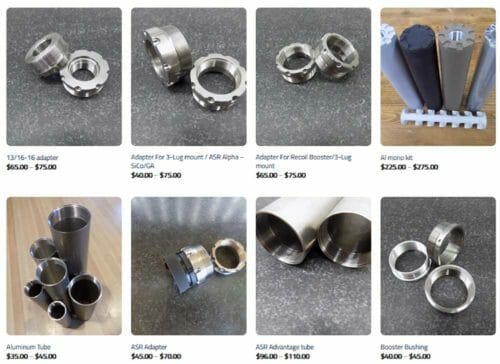 U.S.A. –-(AmmoLand.com)- On 7 January 2020, John Andrews was the target of a “controlled delivery”. A controlled delivery is where contraband has been intercepted and is delivered to a suspect as part of a warrant for a search. Acceptance of the parcel containing the contraband is part of the necessary conditions for service of the warrant.

The parcel in question was a solvent trap ordered from China. Solvent traps are not contraband.

The warrant claimed the solvent trap was an illegal silencer. New York is one of only eight states where it is completely illegal to possess a silencer.

Agencies present at the controlled delivery and warrant service were West Seneca Police, Agents of Homeland Security, the ATF, Customs, and the Postal Inspector’s office. Andrews had several firearms and firearms parts, legally obtained and possessed, in his home. He was indicted on six felony charges.

There was a problem for all those police and agents. The solvent trap was not an illegal silencer.

The warrant was not legally obtained. All charges were dismissed on 14 January 2021. From buffalonews.com:

The problem with the warrant a West Seneca police detective got for Andrews’ home, which was based on information supplied by federal agencies, was this: they told a town justice Andrews was getting a “silencer” shipped to him, not a solvent trap.

“The choice of words used by the police in the application were persuasive and wrong,” Justice Christopher J. Burns wrote in his Jan. 14 decision. “As a result, this court must find there was a reckless disregard for the true nature of the item and must suppress any items recovered through the search warrant.”

All of the charges appear to be based on New York State statutes, not Federal statutes. If there were federal violations, the charges would have been heard in federal court.  A month after the charges were dismissed against John Andrews, another resident of Erie County was entangled in a similar case.

On February 11, 2021, another search warrant was executed based on information from the U.S. Customs and Border Protection.

BUFFALO, N.Y. (WIVB)– Fredrick Oehler, 60, of the Town of Tonawanda was arraigned on February 11 for possession of an illegal assault weapon and firearm silencer, according to the Erie County District Attorney’s Office.

Oehler was charged on two counts of criminal possession of a weapon in the third degree.

The DA’s office tells us a search warrant was executed on February 11, 2021 at Oehler’s Ellicott Creek Road home. The Erie County Sheriff’s Office conducted the search after “receiving a tip from U.S. Customs and Border Protection that the defendant had allegedly purchased an illegal firearm silencer from China,” The DA said.

Authorities recovered an assault weapon and a silencer.

The “assault weapon” was not identified. Upstate New York is a hotbed of civil disobedience to the “safe act” which required registration of numerous rifles.

This correspondent has not found more details of the Oeler case. It would be interesting if Mr. Oehler were able to contact R. Anthony Rupp III, the attorney for John Andrews. U.S. Customs should be able to show photographic proof the item delivered to Mr. Oehler was an illegal silencer, and not a solvent trap.

These cases contrast considerably with a case involving firearms, silencers, and ISIS from 2014 in the same New York county. In 2014 a case was brought against Mufid a. Elfgeeh for firearms and silencers. In this case a confidential source gave the guns and silencers to Mufid Elfgeeh as part of an FBI sting.

Assistant U.S. Attorneys Brett A. Harvey and Frank H. Sherman, who are handling the case, stated that according to the complaint, Elfgeeh has expressed his support for various terrorist groups, including al-Qa’ida and the Islamic State of Iraq and the Levant, and the pursuit of violent jihad. Consistent with this ideology, Elfgeeh has discussed a plan to shoot and kill both members of the United States military returning from Iraq and unidentified Shi’a Muslims in the Western District of New York. As part of that plan, Elfgeeh purchased two handguns equipped with firearm silencers and ammunition from a confidential source. The handguns were made inoperable by the FBI before the confidential source gave them to Elfgeeh.

In 42 states, citizens can avoid the legal troubles of John Andrews and Frederick Oehler by applying for a Form 1 to legally make their own silencer from a solvent trap.

Legal silencers number over 2 million in the United States, in spite of the banning of the safety devices in eight states. Those states are shown on this map from the American Suppressor Association:

The regulation and tax on these safety tools are excessive. However, paying the $200 tax to make your own silencer, legally, is a worthwhile insurance policy against federal prosecution. In the cases this correspondent has reviewed, the prosecution checks with the ATF to determine if a Form 1 has been applied for before issuing a search warrant.