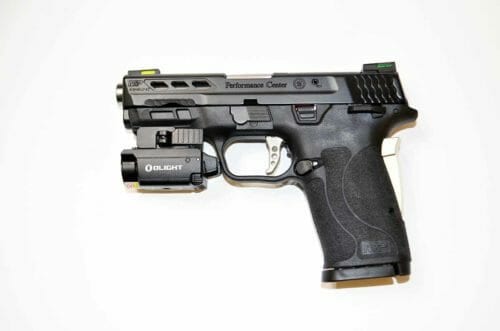 U.S.A. –-(AmmoLand.com)- With the rise of compact and subcompact pistols for personal defense use, the big question for many was: “When will tactical lights get smaller?”

Advances in tactical weapon-mounted lights (WML) have been on the rise. Today’s shooter can choose from a multitude of options with brighter Lumens or the integration of lasers, but sometimes, you simply need a light that will fit without the excessive bulk.

While writing a few articles about sub-compact pistols equipped with accessory rails, I had difficulty fitting a WML. In one case the single rail slot was positioned in such a way that I had to get ultra-creative to mount a light. It turned out fine with some creative building, but I thought there has to be a better way.

O Light’s Baldr RL Mini is the answer to this question. Throwing 600 Lumens for 130 yards with a visible red laser option; this light measures 2.75” in length and retails for around $100.

My first impression of the Baldr ML Mini was that it was tiny. Yet that was exactly what I was looking for. Even better is the mounting bracket, which allows the shooter to move the light module forward and backward. If you have a particular pistol with say a single rail slot, you can mount the bracket and move the light to the correct position that works best for you.

On the bottom of the Baldr RL Mini is a switch that allows the shooter to select what mode they want to operate with: White light only, laser only or white light and laser.

In front of the switch is a charging port. The charging adapter clamps to it magnetically. Plug it into a USB port and you can charge this one up without having to buy and replace batteries every other month or so. This helps keep the size of the light on the smaller side.

The throw on the light is just about perfect for close-range pistol shooting. While you could mount it on a rifle, there are better lights for that purpose. The runtime is less than an hour. It may not seem like a lot, especially if you are attending a lowlight course, but this is intended for civilian defensive use where the light is needed to identify a target. If you want to run a course with this, make sure you have the ability to charge up your light between stages.

It is not so small that it will fit in a standard holster. As of this writing, there are no factory holsters that will accommodate the pistol and light combination, so a shooter will have to go the custom route for that purpose.

I mounted the light to a S&W Shield EZ PC in 9mm. Fitting was easy and instinctual and it mounted securely. After several hundred rounds I noticed no movement or loosening of the mount.

The laser was very easy to adjust to point of impact with the included Allen wrenches. The red laser seemed to wash out a bit at times due to distance, but for a close-range sighting system within 10 yards, I found it more than satisfactory.

The test gun we used is a great concealed carry handgun based on the Smith & Wesson M&P Shield. This model rolled out in early 2020 and it was almost as if Smith & Wesson anticipated a deluge of new shooters due to the pandemic and riots that have plagued the US over the past year.

Answering the demands of new shooters who complained about the mushy trigger of the M&P shield or the difficulty with racking the slide; Smith & Wesson added a more traditional trigger and internal hammer coupled with a grip safety. The result is a handgun geared toward the new shooter and taking into account shooters with poor hand strength such as the elderly or disabled.

This version is a Performance Center pistol which features a single port on the barrel that helps keep the pistol from rising and in the case of the O Light Baldr RL Mini, prevents carbon from building up on the flashlight’s lens.

The pistol is reasonably accurate and very comfortable to shoot. I will bring a full review of this one to Ammoland.com at a future date.

While the Baldr RL Mini will certainly fit on a full-sized or compact service pistol; it really shines in the subcompact world. Coupled with the bargain price that O Light is offering this WML; this one is hard to beat. I could live without the laser but it is a nice option for many shooters.

Ammoland readers will receive a discount of 10% and free shipping on this light with the code: Ammoland10

Mike has written over 2000 articles for a number of magazines, websites and newsletters including Blade, RECOIL, OFF-GRID, Tactical Officer, SWAT, Tactical World, Gun Digest, Examiner.com and the US Concealed Carry Association as well as AmmoLand Shooting Sports News.