Man with Bear Spray Killed by Grizzly Near Yellowstone Park 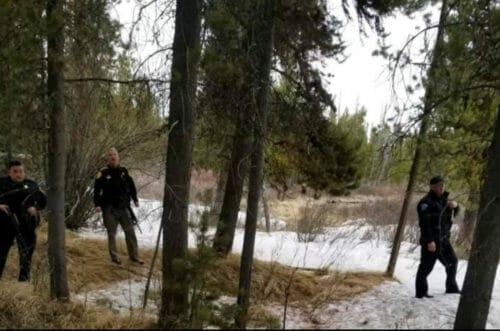 U.S.A. –-(AmmoLand.com)- On the afternoon of 15 April 2021, Carl Mock was attached by a grizzly bear near Baker’s Hole Campground in Gallatin County, Montana.  The campground is a few miles from the town of West Yellowstone, near an entrance to Yellowstone Park. Mock was able to dial 911. Several agencies responded to the call at about 3:42 p.m.  The first responders were able to find Mock after about 50 minutes of searching.

Mock had “sustained significant scalp and facial injuries” according to the Gallatin County Sheriff Search and Rescue Facebook page.  Localnews8.com gave more details of the injuries:

Authorities say the bear attack left him with severe injuries to the left side of his face, head and neck. Judging from his injuries, they said Mock seems to have used the proper fetal position to keep the bear from killing him, but a the bear still managed to bite out a chunk of his skull.

“I want people to know that Carl wasn’t out there… he wasn’t out there making stupid choices and like chasing after animals. He’s very aware of rules and guidelines,” Cook said.

More information was included on an update. Mock had bear spray, the safety tab had been removed, but it was not known if it any had been sprayed.  From ktla.com:

Mock when attacked had bear spray — a Mace-like deterrent meant to protect against attacks — but officials said they did not know if he managed to use it. Bear spray canisters have safety tabs to prevent them from going off accidentally and the safety tab on Mock’s bear spray was off, Jacobsen said.

The grizzly was killed Friday after it charged a group of seven game wardens and other personnel as they approached the scene of the attack. Several people fired at the animal and it died about 20 yards (18 meters) from the group, Jacobsen said.

Officials said they are confident the bear that was killed is the one that attacked Mock.

A gofundme page was set up to cover  Mock’s medical expenses. The site had donations of $28,752 when Mock died of a massive stroke.  He faced a massive number of surgeries.

Several reports indicated a moose carcass was discovered within 50 yards of the attack site. This does not make the deadly attack on a human acceptable.

Grizzly bears have been known to be much more aggressive and dangerous than black bears since they first became known to the American government, as reported by the Lewis and Clark expedition in  1805.

Was this a failure of bear spray?  Yes.

In a conversation with Morgan Jacobsen of Montana FWP, Morgan confirmed bear spray residue had been found on the clothing of Carl Mock.  In our tabulation of pistol defenses against bears, the situation is only included if the pistol has actually been fired. The difficulties of accessing a defensive tool are similar.

If a pistol had been fired, but the bear had not been driven off, it would be counted as a pistol failure. In this case, the bear spray was sprayed, but it did not drive off the bear. Using the same criteria, the bear spray failed.

Bear spray was not used by the investigators. Jacobsen reported the bear was seen charging them from a considerable distance. It was engaged by gunfire before it came into range of bear spray.

On Friday, a group of FWP wardens and bear specialists searched the area and encountered a large male grizzly bear. Wardens say the bear charged the group and did not respond to numerous hazing attempts.

This correspondent has not found information about what firearms were used to defend the group of investigators from the killer grizzly. In the picture of the Search and Rescue unit, one person is armed with an AR15 type rifle, another appears to have a shotgun. Morgan Jacobsen of FWP confirmed the investigators had both rifles and shotguns.

The post Man with Bear Spray Killed by Grizzly Near Yellowstone Park appeared first on AmmoLand.com.