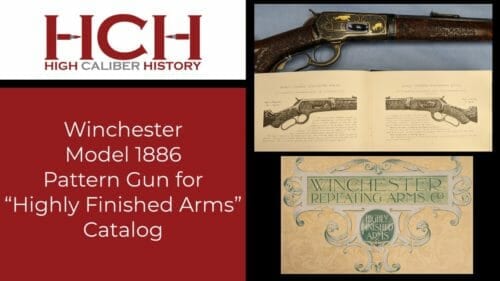 USA – -(Ammoland.com)- Engraved, inlaid, carved, and embellished arms are some of the most eye-catching and highly collectible pieces on the market, regardless of maker. That said, Winchester rifles exhibiting these qualities always seem to rise to the top, making them the blue-chip investments of the collectible gun world. It’s been that way for decades, and contemporary sales prices indicate that this isn’t going to change any time soon.

Collectors and engravers alike have long studied the 1897 Winchester publication, Highly Finished Arms, which went through a number of different model rifles with different styles and levels of metal engraving and stock carving that was available from the factory. Winchester employed some of the best engravers and carvers of this era, and the pieces they created are nothing short of high art. Because there were so many different styles, options, and grades to choose from, you’ll find many gorgeous guns out there today that were inspired by those pattern guns featured in that booklet, but you’d be hard-pressed to find any two guns that are just alike.

The most expensive level of engraving was called “No. 1” and the most expensive style of stock carving was called “A.” They added an extra $250 and $60, respectively, to the base cost of the rifle. Adjusted for inflation, the engraving would cost approximately $7,900 and the stock carving would cost approximately $1,900. That might sound like a lot, but really, to have that kind of work done to a gun today would easily run you $9,800 – and that would probably be a bargain – especially when you consider that the No. 1 engraving level called for inlay of both gold and platinum. With precious metal prices the way they are right now, the final cost makes sense!

As is noted in the 1897 catalog, any gun that is ordered with this level of embellishment “will be the result of hundreds of hours of labor.”

One of the models featured in the booklet is the Model 1886, which was chambered for the larger cartridges of its day, such as the .45-70 and .45-90. Like I mentioned earlier, there were specific pattern guns that were used for the demonstration illustrations in the 1897 booklet. That’s what makes this particular Winchester 1886 so special.

It’s been determined that this gun is the actual pattern gun depicted in the original booklet! No engraver or stock carver creates two pieces that are exactly alike. Similar, yes, but not exactly alike. The experts at Lewis & Grant Auctions, who between them have hundreds of years of experience studying, collecting, and selling high-end arms, have studied both this gun and the publication long and hard before announcing that they have identified it as the gun in the Highly Finished Arms catalog!

Chambered in .45-70, this rifle is really something special. Not just because of its level of embellishment or its link to history, but because of when it was made. The serial number dates the gun to 1897, meaning it was a brand-spanking-new gun when it was embellished. It also means that this mechanical piece of high art is legally an antique. It can be shipped direct to your door, no government paperwork required.

An opportunity to own a piece of art like this doesn’t come up often, and this gun will be available in the May 2021 sale from Lewis & Grant Auctions.