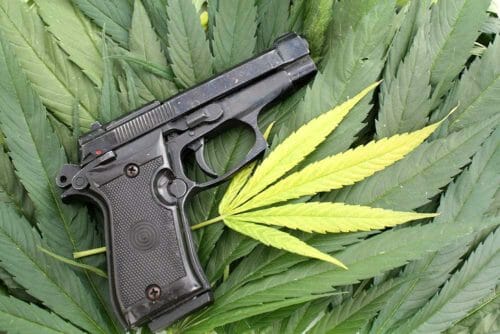 The NICS Indices breaks down why people are prohibited (or disqualified or “DQ”) from purchasing firearms. It is no surprise the number one reason someone would find themselves on the NICS Indices is that they are in the country illegally. That number grew from 7,180,669 to 10,079,990. This statistic is expected to grow as migrants flow over the border due to Biden’s immigration policies.

Most people would assume the following highest number of prohibited people would-be felons. That isn’t the case.

The second-highest number of people on the NICS Indices are on the list is because of mental health reasons. The number grew from 4,974,221 in 2017 to 6,480,865. That is a little over 1.5 million people added to the list. The difference far outpaces the population growth for adults in the country.

There are roughly 253,768,092 adults in the United States. That number means that a little over 2.5% cannot own firearms because someone adjugated them mentally unstable. The FBI doesn’t break down what mental conditions put the people on the list. Still, this number will probably grow since Biden is expected to roll back Trump’s decision not to consider someone who has trouble managing their finances as mentally defective.

The fourth highest number of prohibited people on the NICS Indices is known as “State Prohibitors.” These are people that states reported the FBI as ineligible to purchase a firearm. There could be many reasons for some being a “State Prohibitor,” but the FBI doesn’t break down why the states added people to the NICS Indices. The number grew by nearly 47%, from 961,882 to 1,800,656. That increase means states are putting more people into NICS as prohibited people than ever before.

One interesting thing of note found on the documents is that the number of people the FBI disqualifies from buying a gun for being an “unlawful user/addicted to a controlled substance” has fallen drastically. In 2017, 44,409 people could not buy guns because of illegal drug use. That number now sits at 25,275. That is a decrease of 43%.

Drug use has not fallen by 43% over the past three years, but as states decriminalized marijuana. Although on the federal level it is still illegal to use the drug, people are less likely to get arrested for simple possession or use. If there is no arrest, the FBI will never know the person should be prohibited from buying a gun in the eyes of the law.

AmmoLand will keep digging into the NICS Indices and inform our readers of our findings.