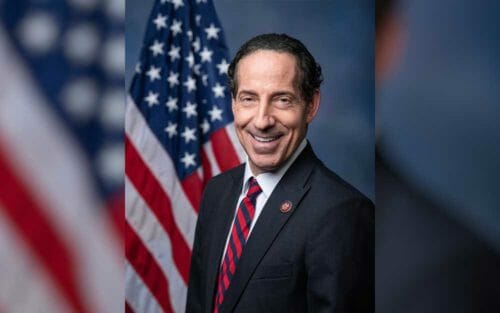 U.S.A. -(AmmoLand.com)- Congressman Jamie Raskin (D-Md.) sure loves some of that sin-tax money. That’s the kind of money when a Member of Congress wants to ban things but can’t. So they go to their second favorite activity. They tax it.

U.S. Rep. Raskin likes his gun policies both ways. If he can’t restrict Americans’ ability to lawfully purchase a firearm, he’ll gladly accept the tax dollars paid on them by Americans while at the same time trying to price them out of their Second Amendment rights.

Rep. Raskin isn’t deterred by gun control bills already passed by the House of Representatives. He introduced tax increase legislation as an end-run gun control effort instead. It’s nearly the next best thing for a gun control politician.

The National Firearms Act Modernization Act, H.R. 2427, would increase the tax paid on certain items already strictly regulated under the National Firearms Act. Currently, Americans must complete additional extensive background checks and fingerprinting, submit photos and pay a $200 tax to purchase certain types of firearms, including short-barreled rifles or shotguns and even suppressors. Under Rep. Raskin’s bill, the tax would increase to $300. There are currently approximately 2 million registered firearm suppressors today and they are a health benefit when used for hunting and recreational shooting by protecting hunters’ hearing. They are legal to own and possess in 42 states and 40 states allow them for hunting.

But if Rep. Raskin can further infringe the Second Amendment rights of Americans while also raising taxes, he’ll go for it. “I’m proud to introduce the SAFER Act and the NFA Modernization Act today and will continue pushing for commonsense gun safety legislation so we can prevent gun violence and save lives. I applaud President Biden and Vice President Harris for announcing strong executive action to address the gun violence public health epidemic,” Rep. Raskin said in a statement.

President Joe Biden announced executive actions on gun control, including regulating so-called “ghost guns,” tightening restrictions on pistol-stabilizing arm braces, calling for expanding background checks on private firearm transfers, closing the falsely-termed “gun show loophole” banning modern sporting rifles. He capped it with his nomination of former gun control lobbyist and advocate David Chipman to lead the Bureau of Alcohol, Tobacco, Firearms, and Explosives (ATF). Rep. Raskin is all in on all of those efforts. Of course, none of these would punish criminals for misusing firearms, nor prevent the recent tragedies of murder.

There is a reason gun control efforts stalled in Congress and why Rep. Raskin’s bill faces a steep uphill battle. More than 21 million background checks were processed for the sale of a firearm in 2020. The first quarter of 2021 hit a record-high mark as well, continuing the blistering sales pace. Included in those numbers are more than 8.4 million first-time buyers, jumping off the fence to take their own self-defense into their hands. African-American gun ownership increased 58 percent over the previous year. Asian-Americans purchased 43 percent more firearms than they did in 2019. Hispanic-Americans did so by 49 percent more.

More Americans own guns and they’re coming from all walks of life.

Sen. Joe Manchin (D-W.V.) understands this change. So too does Sen. Lindsey Graham (R-S.C.). He even challenged Senate Majority Leader Chuck Schumer (D-N.Y.) to put a so-called “assault weapons ban” on the Senate floor for a vote. “If you really want to ban assault weapons, bring up the bill, and let’s have the debate. The reason Senator Schumer won’t bring up the so-called Assault Weapons Ban, which is a misnomer, is because it won’t pass. It won’t get 50 votes, much less 60,” Sen. Graham taunted.

The demographics of voters who lawfully own firearms have changed dramatically and taking their rights away and adding a fee to exercise a right, isn’t selling. Rep. Raskin isn’t talking about holding criminals accountable or hitting them with prison time. He’s tossing around the idea to tax a right because if he can’t ban it outright, he’s certainly not going to miss the opportunity to make money off of it.