New McLaughlin Poll: Strong 2A Support, Not So Much for Exec. Orders 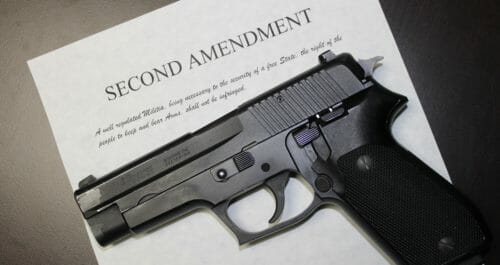 A new national survey conducted by the New York-based McLaughlin & Associates firm for the Second Amendment Foundation has revealed strong public support for the right to keep and bear arms, while also showing tepid interest in regulating firearms through executive orders rather than debating gun laws via the democratic process.

The survey was conducted among 1,000 voters nationwide April 8-13, with a +/- 3.1 percentage point sampling error with a 95% level of confidence, according to pollster Jim McLaughlin. In a Thursday news release from SAF, the national organization that specializes in Second Amendment litigation, McLaughlin observed, “This survey shows clearly that Americans cherish their Second Amendment right. It’s obvious. Anybody who tells you Americans don’t believe in the Second Amendment doesn’t know what they’re talking about. It’s also clear they do not want Joe Biden deciding gun policy on his own, but instead want this issue debated through the democratic process.”

According to the “topline” report on the SAF poll results, 72.6 percent of the public responded positively to this question: “Do you support or oppose the 2nd Amendment of the Constitution, which states the right of the people to keep and bear arms shall not be infringed?” This includes 46.7 percent who “strongly” support and 25.9 percent who “somewhat” support the language. Of the 20.9 percent who oppose the Second Amendment language, 14.3 “somewhat” oppose but only 6.6 percent strongly oppose it.

A second question got an even higher degree of support.

“As we’ve been saying for years,” recalled SAF founder and Executive Vice President Alan Gottlieb, “gun control extremists have been completely wrong in their desire erase the Second Amendment and turn a right to bear arms into a heavily-regulated privilege. That notion doesn’t even square with non-gun owners, as the McLaughlin survey results confirm.

“Americans are protective of their constitutional rights,” he added, “and we will use these poll results to fight the attacks on gun owners happening right now on Capitol Hill and in the Oval Office.”

Gottlieb, who also chairs the Citizens Committee for the Right to Keep and Bear Arms, offered an even more pointed comment.

“Based on these survey results, anti-gunners, including Joe Biden, should cool their zeal for passing new legislation,” Gottlieb stated.

That much is evident in the reaction to two survey questions.

“When it comes to the issue of enacting more gun control legislation, which statement do you agree with more?

Just over 58 percent (58.1%) want all gun control proposals debated through the traditional process while only 31 percent want the president to enact gun control via executive order.

The survey also found that more people (44.9%) do not believe more gun control laws would have stopped the recent mass shooting tragedies in Colorado and Georgia, while 37.6 percent thing more laws would have prevented these incidents. Meanwhile 17.5 percent of those polled weren’t sure one way of the other.

There was one more question in the survey that should give anti-gunners pause when looking ahead to the 2022 midterm elections.

“How likely are you to support a candidate for Congress who supports the 2nd Amendment and the right to bear arms?”

A telling 58.1 percent of survey respondents said it is “very likely” they will support such a candidate, while only 21.9 percent said they would be “less likely” to vote for a pro-rights candidate. Meanwhile, 13.6 percent said it wouldn’t make any difference. This suggests Congressional Democrats, whose House majority has been shrinking, should carefully re-think any strategies they may have about pressing gun control, considering what happened at the 1994 mid-term election where Democrats were slammed on election night after gun owners energized and descended on polling places.

Ironically, earlier this week, Politico released the results of a poll it conducted with the Morning Consult that said more people trust Congressional Democrats (45%) rather than Republicans (34%) “to handle gun policy.” This survey also said 46 percent of respondents think it is more important to limit gun ownership than it is to protect the rights of American gun owners (44%).

Yet, the Politico-Morning Consult poll also shows more than double the opposition to repealing the Second Amendment (55%) than support for repeal (23%), and an alarming 22% either don’t know or do not have an opinion.

One thing appears clear from the McLaughlin survey, though. Those now pushing a gun control agenda are not in sync with a majority of Americans when it comes to protecting the right to keep and bear arms. While poll results may differ from one survey to the next, far fewer people want to tamper with the Bill of Rights than those who want to remove its cornerstone “insurance” provision.

The post New McLaughlin Poll: Strong 2A Support, Not So Much for Exec. Orders appeared first on AmmoLand.com.