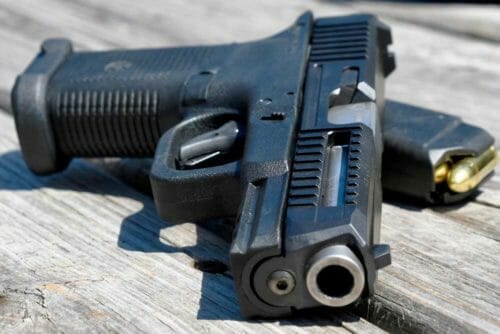 U.S.A. -(AmmoLand.com)- Lone Wolf is revered by shooters for its high-quality Glock pattern components. They were the first to bring a straight grip angle to the Glock platform with their serialized frame offerings. Building off of that success, Lone Wolf has released their first complete handgun, the Lightweight Tactical Defense 19, or LTD19 for short.

The LTD19 is a compact handgun, very comparable in size to the Glock 19. It’s comprised entirely of Lone Wolf parts. This means–out of the box– it comes with a high-quality barrel, ergonomic frame and nitride finished slide with aggressive windows and serrations. The LTD19 makes use of Glock magazines and is compatible with many third- and fourth-generation Glock pattern parts. The sights are also Glock pattern, giving the shooter a wealth of options when it comes to selecting aftermarket sights.

The first thing a shooter will probably notice when they pick up the LTD19 is its lightweight feel. The Lone Wolf weighs approximately 3 ounces less than a similar Glock 19, measured without the magazines. This difference is more evident than it might sound on paper. The LTD19’s lightweight and compact size makes it a perfect candidate for concealed carry.

The ergonomics of the LTD19 are where it shines most. The frame is the star of the show when it comes to this pistol. Lone Wolf has been selling similar frames with great success for several years now. The frame improves the ergonomics of Glock pattern handguns by making the grip less blocky and reducing the somewhat severe traditional Glock grip angle. Shooters accustomed to guns with straighter grip angles, such as the 1911 and Sig Sauer P320, will find the LTD19 much more natural to shoot than other Glock pattern handguns. I have never been a hater of Glocks, but I have always found the grip angle unnatural and have had to tilt my wrists downward to acquire my sights when using them. This is unfortunate as I have great respect for the reliability of Glock handguns The straight grip angle of the LTD19 has allowed me to enjoy the merits of Glock pattern handguns without sacrificing my ability to aim and shoot naturally.

The angle of the grip may be the most drastic change, but the frame also houses several other upgrades over more traditional Glock pattern frames. The grip is less blocky with smooth, rounded edges that make the gun much more comfortable for shooters with smaller hands. The texture on the grip provides good traction when maneuvering with and firing the gun with sweaty or rain-soaked hands(something that became clear to me when the weather took a turn for the worst on one of my first trips to the range with the LTD19). The controls on the LTD19 are all easy to actuate. The slide release, takedown tabs, and magazine release are all extended to be natural to reach during reloads and disassembly.

The Slide may be the most eye-catching part of the LTD19. Lone Wolf offers two different styles of slide cuts on the LTD19. The style pictured is the V1 variation. Surprisingly, this is the less aggressive of the two styles. The V1 features a large window on both sides of the slide, which exposes the stainless steel barrel. It also features plentiful front and rear serrations. These serrations have a lot of bite. They’re extremely effective at keeping the shooter in control of the slide during manipulations. A removable magazine well sits at the bottom of the grip. It’s a great size: big enough to actually help guide the magazine into the well, but not so big that the gun feels clunky when handling it.

Shooting with the Lone Wolf LTD-19 has been refreshing. It delivers an entirely different experience than any of the other handguns in my safe. Glock pattern firearms make up a good chunk of the striker-fired, polymer-framed market. I can confirm that while there are obviously some similarities, the LTD-19 stands apart from these other Glock pattern pistols with its unorthodox shape and unique shooting characteristics.

On the range, the LTD19 was a joy to shoot. If I had to use only one word to describe it, that word would be agile. During transitions, the gun zips from target to target effortlessly. The overall lightweight feel of the gun is very conducive to shooting on the move. It’s almost hard for me to stick to stationary slow fire drills when shooting the LTD19, as the gun just begs to be run around with and shot with rapidity. The trigger is similar to other Glock pattern pistols; that is to say, it’s a bit crunchy. The trigger reset is decent. With practice, I’ve found that I can rattle off double and even triple taps while staying on a 66% Caldwell Steel IPSC target at 10 yards. That’s more than good enough for a medium-weight, carry-oriented trigger in my opinion.

Slide cuts are a very popular feature of this pattern of handgun. The idea is that reducing the reciprocating mass of the slide will reduce felt recoil. Surprisingly, I am not positive that that’s the case with the LTD19. Its overall lightweight may be the culprit to blame for it being just a hair snappier than a standard Glock 19. It has about the same recoil impulse as a Sig P320 compact; it’s not anywhere near unmanageable, but it could be a bit better. The savings in weight is worth the slightly jumpy recoil of the LTD19 in my opinion, as the recoil is still on par with other alternatives in the pistol world. If a shooter can learn to slow down their shooting when needed to keep their string of fire on a target, they will do very well with the LTD19.

The LTD 19 did not fail to impress when it came to reliability. It netted a total of 0 malfunctions over the course of 1000 rounds of 115-grain, full metal jacket 9mm, and an additional one hundred and fifty rounds of mixed defensive ammunition, including Barnes Tac XPD, Black Hills JHP, and Hornady Critical Defense. Over the course of testing the gun was cleaned and lubricated 4 times. I fully believe that the gun would have chugged right along to reach its 1150 round count without incident, even if I had refrained from cleaning it. It never showed any signs of faltering. I would carry the LTD19 in a heartbeat.

The LTD19 comes in at about 700 dollars. This means that the LTD19 costs more than a similar Glock 19. I believe a shooter is getting their money’s worth from the LTD19. It’s not a gun that’s made to be an inexpensive alternative to Glock, it’s a feature-packed alternative that comes out of the box with a number of enhancements. Many of the things Glock pattern handgun owners do to customize their pistols are already done to the LTD19 at the factory. It has slide cuts and serrations, extended controls, a custom frame with a solid grip texture, and a mag well.

The Lone Wolf LTD19 is the definitive Glock pattern handgun for those who favor a traditional straight grip angle. The gun is different enough from its peers that I feel it is a needed addition to the market. The LTD19 performs and does so in style. Lone Wolf has put out a high-quality handgun with a lot of potential and I hope to see more stellar standalone firearms like this from them in the near future.

Sam is an NRA certified instructor and a videographer. His love for guns of all kinds started at a young age with an interest in military history. He began working with Renaissance Firearms Instruction while still in High School and continues to film videos for their channel to this day. He is currently pursuing a career in Law Enforcement in North Carolina. Sam is an avid shooter and is especially fond of handguns and braced firearms.