All 5 People Who Died January 6th were Trump Supporters 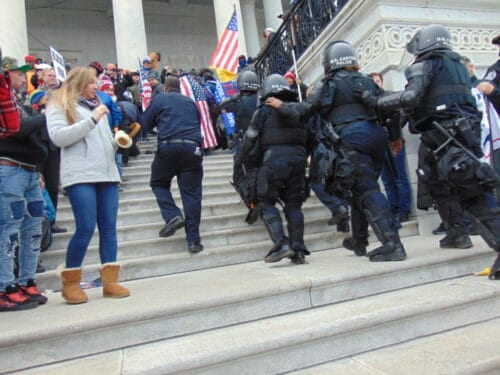 U.S.A. –-(AmmoLand.com)- The narrative that the robust protest at the Capitol, over a deeply contentious and flawed 2020 election, was a “deadly insurrection” is falling apart.  For months the public was bombarded by the media repeating the lie, over and over, that any contention of election misdeeds was false. Half the country, with good reason, did not believe them.

The lack of trust in the Media and public institutions reached a boiling point on January 6th at the Capitol. This correspondent was there. It was clear the overwhelming number of protestors there were concerned about the election, considering it fraudulent.

The younger and most energetic of the protestors, and at least one agent provocateur, pushed their way into the Capitol. They were far more careful of, and considerate of, police than in the riots which had been occurring in leftist cities for most of a year. There were never more than several hundred of them, out of half a million or more protestors.

Five people died that day at the capitol.

According to the Chief Medical Examiner in the District of Columbia, Dr. Francisco Diaz, two people died of natural causes. One died of a drug overdose. One protestor was shot by a Capitol Policeman.

The cause of the death of Officer Brian Sidenick, after 90 days, has yet to be determined.

The narrative that the protestors caused five deaths is false. Here were the five deaths, as reported in theepochtimes.com. All of them appear to have been Trump supporters.

Autopsies are supposed to be completed in 90 days. Exceptional cases may take longer.

The case of Officer Brian Sicknick is a highly political case, where we were told, over and over, Trump supporters killed a police officer in a violent insurrection. This was repeated by the most adored of the Progressive national media, such as the New York Times.  It was claimed Sicknick was beaten with a fire extinguisher. It was a lie.

The Chief Medical Examiner is caught in a dilemma. If he finds Officer Sicknick died of natural causes, his political bosses, friends, neighbors, and associates in the District of Columbia will be very upset.

If he finds Officer Sicknick’s death was in some way, caused by the protestors, everything is forgiven, but the evidence used, the documents recorded and all the procedures will be gone over exhaustively by the family and all concerned.

Dr. Francisco Diaz is, by his biography, a very professional, very conscientious medical examiner, with great honors in his field.

The delay in the finding of the cause of death is not surprising. It is the only option that does not result in immediate severe consequences for Dr. Diaz and his department. Consequently, expect the final result to be something ambiguous, such as “undetermined”.

The post All 5 People Who Died January 6th were Trump Supporters appeared first on AmmoLand.com.