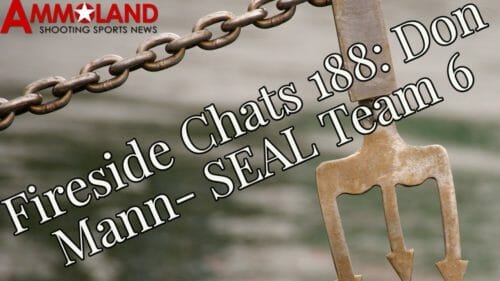 U.S.A. –-(AmmoLand.com)- Don Mann lived an exciting life. He joined the Navy as a Corpsman before trying out for the Navy SEALS. Mann went through BUDS and loved it. While in the SEALS, he learned about a new team on the SEALS led by Richard Marcinko. Mann decided he needed to push himself to join this very elite team of operators. This unit became known as SEAL Team Six and later renamed the Naval Special Warfare Development Group (DEVGRU).

After Mann left the military, he missed pushing himself, so he started running Iron Man competitions, including two in one day. Mann then took it to the level and started running “adventure races.” These races can include paddling, biking, horse riding, paragliding, mountaineering, and rappelling. The race distances can be hundreds of miles long and multi-day events.

Mann is also a New York Times selling author of 22 books, including this autobiography, Inside SEAL Team SIX: My Life and Mission with America’s Elite Warrior. He has been featured on multiple television shows, attempted to climb Everest, and became a motivational speaker.

Mann’s latest adventure is a new TV show titled “Surviving Mann.” The show is co-hosted by former UFC Champion and star of such movies as the Expendables, Randy Couture. In the show, Mann pushing contestants to their breaking point as he puts them through the same challenges he faced.

I have had the opportunity to get to know Don Mann and think that the AmmoLand readers can learn a lot from him. I asked him to do an interview for AmmoLand, and he agreed.

John: What is “Surviving Mann?”

Surviving MANN is all about reaching beyond boundaries. The televised event is actually a world-class selection course, unlike no other. The concept of the show is that I am looking for a qualified, skilled, and experienced operator to conduct a highly classified and dangerous mission with me so, we created a rigorous training and selection course to help find the right person.

There are 32 very qualified and experienced contestants from all walks of life who will battle it out in this very challenging Special Operations course. There will be a SEAL Team-style physical training session every morning to start each day.

John: How did you get involved in the project?

Don: The Executive Producer of the show had the idea about eight years ago. He briefed me on the concept, and I agreed to doing it with him. This past year, everything fell into place. He lined up the sponsors, the advertisers and found the perfect location to hold the event – Frontsight Nevada.

John: Who is your co-host?

Don: Randy Couture, legendary mixed martial arts champion and feature film star, is my co-host. Randy, also a veteran, said that he liked what we were doing, and he believed in the project. The Executive Producer reached out to Randy and invited to be my co-host.

John: How did you design the course?

Don: Although I designed the course to be focused on shooting, I added other elements as well so that the contestants would be challenged in many ways other than just shooting. For a participant to complete the course, they need to not only be proficient in pistol, long gun and shotgun range, and tactical shooting they need to be fit, strong, fast, able to navigate in the desert and underground, able to traverse high-ropes and in other ways in which we will not disclose until the start of the event. The participants signed up for a challenge, and I promised them all that they will all be challenged a great deal!

John: How did you find the contestants?

Don: We put out a casting call asking for interested personnel to submit an application along with a video. We received over 600 applications, and 32 were chosen. The backgrounds and experience of the chosen 32 are very impressive!

John: The show involves shooting guns, and gun rights are under attack. Are you worried that will hurt the show?

Don: Surviving Mann does promote shooting, weapons safety, and defensive shooting. I’m sure some of the folks in the anti-gun communities will not be a fan of the show, but it is not our intent to try and please everybody.

John: We have talked about the Second Amendment, and you are a huge supporter of gun rights. Why do you think so many politicians are going after guns?

Don: I am a supporter of gun rights. We always need the ability to defend ourselves and our families. We have all seen the devastations in other countries where they took away their citizens’ rights to bear arms. It is my belief that the politicians who are going after our guns are doing so solely for political purposes. I have failed in seeing any sound reasoning from any politician who thinks taking the guns away from law-abiding citizens will make this a safer country. There are gun laws on the books, and it is many of these same politicians who fail to enforce these laws.

John: What is your favorite gun?

Check out Don Mann at usfrogmann.com.

Check Out “Surviving Mann” at survivingmann.com.