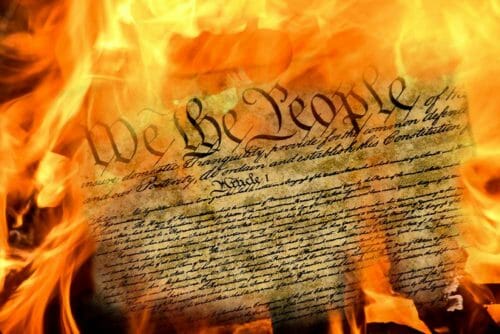 U.S.A. –-(AmmoLand.com)- Writing at Fox News Sunday, Ted Harvey, a former Colorado legislator now chairing the Committee to Defeat the President, described as an “anti-Biden super PAC,” asserted Joe Biden is “determined to trample on the Second Amendment” while at the same time “undermining the right to bear arms in unilateral fashion.”

“When it comes to gun control,” Harvey alleges, “the Biden administration believes in government by fiat, unencumbered by the legal constraints placed on the presidency. He says so himself: ‘I’m going to use all the resources at my disposal to keep people safe’ – even if it means treading on the Constitution.”

While it might be easy to dismiss Harvey’s Op-Ed as partisan claptrap, it is far more challenging when one considers the Biden gun control plan covered several times at AmmoLand News. Biden is on record

Harvey’s column quickly cuts to the chase when he observes, “Of course, Democrats fail to acknowledge that Colorado – my home state and the site of America’s most recent mass shooting – already has some of the strictest gun laws in the country. The state government – in which I served for more than a decade – already mandates universal background checks and bans high-capacity magazines. Colorado is even a “red flag” state, allowing law enforcement officials to temporarily seize weapons from those deemed an extreme risk.

“As is often the case, the Democratic Party’s laundry list of gun control demands would have done nothing to stop the Colorado shooting.”

Harvey, in the vernacular of target shooters, has put it in the X-ring.

The gun control movement, which has become the gun prohibition movement since anti-gunners started pushing for a ban on the manufacture and sale of so-called “semiautomatic assault weapons,” has their man in Joe Biden. In an email blast following Biden’s announcement of his “initial” gun control program, Everytown for Gun Safety—the billionaire-backed lobbying group largely bankrolled by Michael Bloomberg—declared, “This morning, we were at the White House to witness a historic moment for our movement: President Joe Biden is taking executive action to end our country’s gun violence crisis. President Biden and Vice President Kamala Harris ran on the strongest gun safety platform ever, and today, they took an important step in putting that platform into action to help save lives.” It was signed by Everytown President John Feinblatt and Angela Ferrell-Zabala, head of the group’s Movement Building effort.

They were apparently present at the White House, but as recently stated by Alan Gottlieb, chairman of the Citizens Committee for the Right to Keep and Bear Arms and founder of the Second Amendment Foundation, “Nobody from the Biden administration has reached out to us or any other rights organization to my knowledge, which certainly clarifies Biden’s approach to firearms regulation. He came into office talking about unity, but he just declared war on tens of millions of law-abiding gun owners who have committed no crimes.”

Another prominent gun prohibition group is Giffords, named for former Congresswoman Gabrielle “Gabby” Giffords, who survived an attempted assassination attempt in Tucson, Arizona ten years ago in which six other people were killed. Giffords just announced the hiring of another former member of Congress, one-term Democrat Debbie Mucarsel-Powell, the first South America-born member of Congress.

When NBC News reported about Mucarsel-Powell’s new job as senior advisor to Giffords, it noted right up front “Seeing her father’s body with gunshot wounds was one of the most traumatic moments” for her. He was murdered in 1996, outside his residence.

A little research reveals that her father was not murdered in the United States, but in Ecuador, where he was, according to the NBC story, “an entrepreneur of Lebanese descent who lived in the city of Guayaquil.”

No U.S. gun control law could have prevented the Ecuador murder. Anti-gunners have the same problem in the U.S. As Harvey explained over the weekend, the “laundry list” of proposed gun control restrictions would have made no difference in the Boulder mass shooting, same as they haven’t prevented any other mass shooting in recent history.

Just look at Seattle, Washington, which instituted a gun and ammunition tax in mid-2015 to fund “violence reduction” efforts. Homicides have steadily climbed in the city, and over the weekend there was a drive-by shooting that wounded four people, including a toddler. A nearly identical tax was adopted in Cook County, Illinois but the body count keeps climbing in Chicago.

Adding insult to injury, Biden has nominated a man the National Review headlined as an “anti-gun fanatic” to head the Bureau of Alcohol, Tobacco, Firearms and Explosives, the government’s gun law enforcement agency.

The Washington Free Beacon quoted SAF’s Gottlieb asserting Biden’s nomination of Chipman “is an attempt to politicize the ATF.

“The bottom line is we will have the ATF working against gun owners rather than being a neutral government agency to enforce laws,” Gottlieb said. “We’re probably going to have what I would consider to be a very rogue ATF. … Everybody in the whole firearms community and Second Amendment community is going to pull out all the stops to fight the confirmation.”

So far, every signal from the Biden administration—which is now being called the “Biden-Harris” administration by many in the media, as Vice President Kamala Harris never seems to be more than a few steps away from the president during public appearances—has been increasingly hostile to gun owners and the Second Amendment. Harvey says as much in his Fox News Op-Ed, which was amplified by Amy Swearer, a legal fellow at the Meese Center for Legal and Judicial Studies at the Heritage Foundation.

Writing at the Deseret News, Swearer observed about Biden’s gun control proposals, “We don’t yet have the specific language the DOJ will eventually use in these rules, but two things are immediately clear. One is that these actions are primarily political stunts that can do very little to address gun violence. Second, they serve as notice to responsible gun owners that the White House doesn’t think very highly of their Second Amendment rights.”

A few paragraphs later, Swearer added, “Every American wants safer communities and to ensure that criminals don’t have ready access to firearms. Unfortunately, instead of looking for effective bipartisan solutions, President Biden has decided to play politics in hopes that Americans won’t know any better.”

The post ‘Biden Determined to Trample on 2A’ Says Chair of Anti-Biden Super PAC appeared first on AmmoLand.com.