Is The Lucid Optics M7 Compact Reflex Sight Any Good? 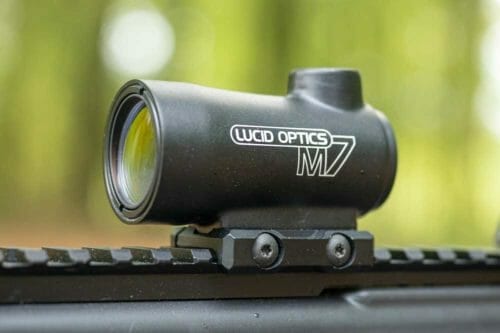 U.S.A. -(AmmoLand.com)- Lucid Optics is a relatively small company in the world of weapon sights, and their M7 is equally diminutive. Full disclosure, I have a good amount of experience with their magnified optics, and even used one at Highbar Homestead to shoot out to a mile – so I’m a little biased. That said, reviews of the original M7 online have been mixed for sure. So is the new M7 any good?

I first got my hands on the M7 roughly a year ago. Since then, I’ve mounted the optic on my Benelli M4 shotgun, a PTR-9CT MP5 clone, a number of franken-ARs, and most recently, my IWI 308 Galil pistol. In my testing, the optic never lost zero provided it was properly tightened down. After these thousands of rounds were fired with the M7 attached, I performed a pseudo-box test on the optic. This was done to check if the adjustments on the M7 were accurate and consistent. I used a Streamlight RM2 light/laser combo and zeroed the laser to the M7’s point of aim at 10 yards down a hallway.

I then adjusted the M7 25 clicks up and 25 clicks left, before heading out to my range and firing a 20-round magazine through my Galil 308 pistol. I then repeated these adjustments in reverse to see if the point of aim to see if the M7 retained zero and adjusted consistently. The results were mostly positive, with the point of aim having shifted less than a quarter of the diameter of the center dot of the Lucid’s reticle. Not perfect, but the shift was around an eighth of an MOA. For a short-range reflex sight, this is perfectly acceptable.

Speaking of the reticle, I had read reports of the reticle being, ‘blurry’ to some shooters or having a starburst effect on it. My test optic didn’t have any of these issues, but the reticle is noticeably fussy without my glasses on. But this is also the case with every red dot sight I’ve ever used, and not indicative of any underlying issues with the M7. But if you’re one of the unlucky few who do get this issue, Lucid will replace the optic free of charge. But let’s get back to the reticle for a moment.

The Lucid M7 reticle consists of a donut surrounding a chevron that comes to a point with a small dot in the center. Presumably to give the shooter multiple options for leading and holdover. The donut is 32 MOA wide, while the dot measures four MOA.

In testing, the reticle proved very quick for close and mid-range shooting out to 150 yards. I especially liked running it on my SBRs and large-format handguns. But enough subjective info let’s get down to the stats.

The M7 runs on a single CR2032 battery that allows the optic to run for up to1,000 hours. Not AimPoint crazy numbers, but completely fine considering the optic’s price-point. Additionally, the M7 is built from 6061 anodized aluminum, features a 25mm objective lens, and weighs in at 4.4 ounces. It features a Picatinny mount secured by two hex screws and includes the proper wrench to tighten in the box. The mount itself appears to be compatible with those for the AimPoint Micro, so there will be plenty of aftermarket mounting solutions available to shooters.

Finally, the Lucid Optics M7 retails for $309.99, but thrifty shooters can find it discounted online with a little shopping around. But even at full MSRP, it’s still a solid deal given the optic’s durability and compact size.

At full price, the Lucid is a good deal, but if you can find it for a little bit discounted, it makes for an excellent close-range optic for home defense, competition, or just range-use. I found it particularly fun to run on my Galil 308, as the bright reticle made re-acquiring targets much easier after the hefty muzzle blast of the short-barreled 308.

The post Is The Lucid Optics M7 Compact Reflex Sight Any Good? appeared first on AmmoLand.com.