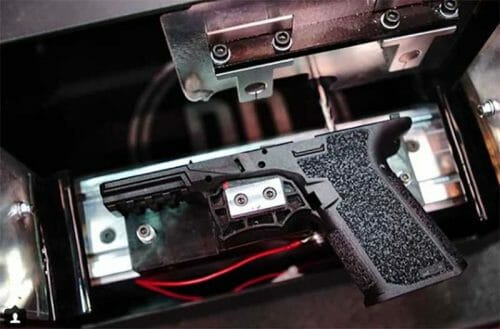 Opinion By: Alex Holladay, Ivan the Troll, and Matt Larosiere

U.S.A. –-(AmmoLand.com)- Many of us bore witness this week to what seemed like the entire firearms community coming down on a single man. The issues were multi-faceted, from allegations of collaboration with gun controllers to straight-up gun control advocacy. The veracity of most of these claims are disputed, but there is one issue that deeply concerned us: the threat of top-down, digital rights management (DRM)-type controls on home gun building.

This concern has roots in a live stream where a seemingly wide-eyed and bushy-tailed Rob Pincus spoke of a possible future where gun companies could sell printable receiver files on a kind of “Apple Music of guns.” This suggestion was met with much vitriol online, where it seemed both sides were talking past one another. That’s why we think it important to explain here just how dangerous this concept is, and why it must be resisted forcefully.

If your only concern is getting the government to lay off home gunmaking at any cost, this might seem like an elegant solution. This is exactly the problem. Like with many forms of pernicious gun control, it seems like an okay deal at first blush. But when you scratch the surface, it’s apparent that this idea could be the biggest threat to the incredibly important intersection of our First and Second Amendment rights.

A DRM approach to gun files threatens these rights because, in order to be effective, it would have to obliterate any semblance of free exchange of information, not to mention the privacy that making guns at home currently offers. Whatever identifying information (serial, user data, etc) in the file would necessarily be tied to the end user’s personal identity. This would make filesharing—if it were even possible—incredibly problematic. It would proactively create a detailed gun registry before the gun even came to exist, with a transaction tied to an individual, both before and after the gun was printed.

While some might not immediately object to having a gun they made irrevocably tied to them, it has serious ramifications when we consider how the anti-gun side has operated in the past. We openly fight against gun registries all the time, and this suggestion would ultimately necessitate their existence.

The very thought of this idea invites the type of underhanded cronyism that keeps Californians from buying new handguns. In California, long before effective microstamping technologies ever existed, but after the ideas were floated, a law was passed which would essentially give the first company to patent a means of microstamping a total monopoly on new handgun designs.

The concern we have is that, if we view this DRM approach to home gun building as in any way acceptable, politicians will latch onto it, create incentives for companies to step in, create a proof-of-concept, which government would make a requirement. This, of course, raises costs, but also effectively murders what many regard as the entire point of home gunmaking: the purest form of exercising our right to self-defense. Of course, this technology doesn’t truly exist yet, but that is also the case with microstamping, much to the chagrin of California’s gun owners.

Our nation’s entire system of law has the right to self-defense at the very core.

The idea of the government as servant and the People as master flows directly and necessarily from a robust individual right to safeguard against unlawful force. That’s why the founders debated heavily whether or not to even include the Second Amendment in our Constitution — the thought was that enumerating it might suggest the government ever had the power to restrict it — something that was widely agreed it never, ever could. And yet, here we are.

Implicit in the right to effective means of self-defense is the right to acquire arms, all of us can agree on that. But what is the most simple, most direct means of acquisition? The only one that leaves out third parties. That is, of course, to make one’s own arms. This country has a rich and storied history of home gunsmithing, which grows richer by the day with today’s ease of communication allowing hobbyists and activists to share their designs.

Now, there’s no doubt that every facet of the right to keep and bear arms in the United States is under attack, and has been for about a century. Anti-gun zealots, it seems, will stop at nothing to try to keep the flow of arms under some form of centralized control. Even if it means stepping on the First Amendment, by criminalizing the sharing of simple design files—which are unquestionably expressive—that could be used to make arms.

We should all care deeply about the right to make arms for ourselves in the privacy of our homes. It is an incredibly important cross of our right to freely exchange information and our right to keep and bear arms. Any erosions we tolerate, be it to our privacy interests, our expressive interests, or our interest in effective arms, will most certainly cascade to the rest.

Alex Holladay is a software engineer and home gunbuilding activist, operating the site CTRL+Pew. Ivan the Troll is a mysterious animal that lives beneath an overpass somewhere on YouTube. Matt Larosiere is a civil rights lawyer and journalist, and host of the YouTube show Fuddbusters.

The post The Threat of DRM-Infused Home Gunbuilding appeared first on AmmoLand.com.