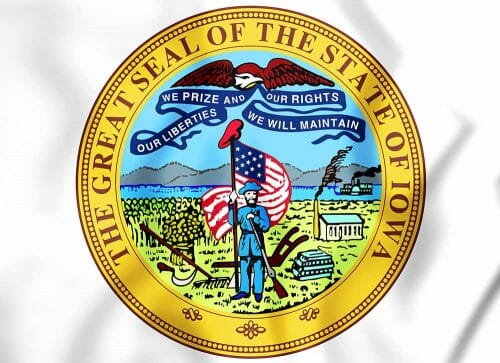 On Friday, 2 April, 202. Governor Kim Reynolds (R) of Iowa, signed bill HF 756 into law. The bill was delivered to Governor Reynolds earlier in the day. Realistically, she could not have signed it any earlier. Governor Reynolds released this gracious statement with the signing of the bill:

“Today I signed legislation that protects the 2nd Amendment rights of Iowa’s law-abiding citizens while still preventing the sale of firearms to criminals and other dangerous individuals. This law also takes greater steps to inform law enforcement about an individual’s mental illness helping ensure firearms don’t end up in the wrong hands. We will never be able to outlaw or prevent every single bad actor from getting a gun, but what we can do is ensure law-abiding citizens have full access to their constitutional rights while keeping Iowans safe.” – Gov. Kim Reynolds

The slogan on the great seal of Iowa seems particularly appropriate: WE PRIZE OUR LIBERTIES AND OUR RIGHTS WE WILL MAINTAIN. A citizen-soldier holding a musket is prominently featured on the seal, created in 1847. The bill will become effective on 1 July, 2021.

In Iowa, the Constitutional Carry bill passed the Senate on 22 March. People may have wondered why it took a week to be signed into law. The history of the bill followed this sequence:

It is part of constitutional, limited government, to follow proper procedures, with due process, and proper checks and balances.

It is exactly those things that the enemies of limited government want to destroy, with emergency orders and executive decrees, to make a mockery of due process.

In Tennessee, Governor Bill Lee has said he will sign the Constitutional Carry bill he sponsored in the Tennessee legislature.

The bill had not been sent to his office as of Friday, 2 April 2021. It is expected Governor Lee will sign the bill when he gets it. The latest report was the bill was enrolled and ready for the signatures of the House Speaker and Senate Speaker. (In Tennessee, the Speaker of the Senate signs the bills for the Senate).

The other 19 states which are members of the Constitutional Carry club are:

Two states, Wyoming and North Dakota limit Constitutional Carry to residents. Wyoming is in process of eliminating the residency requirement. The bill there is nearly ready to be signed by the governor.

Governor Holcomb, (R) of Indiana, has been endorsed by the NRA. This correspondent has not found a statement by the Governor about Constitutional Carry.