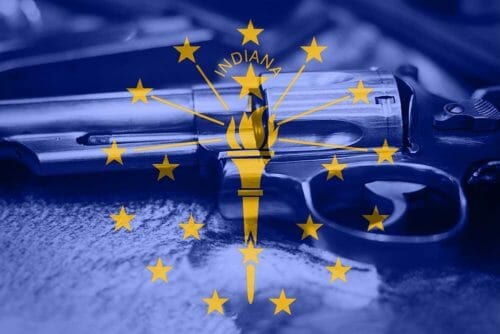 U.S.A. –-(AmmoLand.com)- Indiana appeared to have a good chance of passing Constitutional Carry in 2021. The House passed the bill 64 – 31. A majority of Republicans in the Senate called for the bill’s passage.  From therepublic.com:

Republicans easily pushed the proposal through the Indiana House, but Senate leaders have decided against taking up the bill in the final weeks of this year’s legislative session even though it was co-sponsored by 21 GOP members of the 50-person Senate.

The Indiana Senate has 39 Republicans and 11 Democrats. The opposition of key Republican leaders killed Constitutional Carry through the simple expedient of inaction.

Republican State Senator Liz Brown of Ft. Wayne killed the bill by never scheduling it for a committee hearing. From the indystar.com:

Fort Wayne Republican Sen. Liz Brown, the chair of the Senate Judiciary Committee where the bill has been sitting, declined to give the bill a hearing before the deadline, effectively killing the legislation.

Instead, in the last week bills can be heard in committee, she gave a hearing to a resolution emphasizing the Indiana Senate’s commitment “to protect the constitutional right to keep and bear arms.”

Specifically, Bray said he concurs with the Hoosier Gun Rights organization that the requirement in the legislation for Indiana to create a database of individuals barred from possessing a gun due to a felony or domestic violence conviction, dishonorable military discharge, or history of mental illness is a “poison pill,” since data restrictions and privacy concerns inevitably will prevent such a database from being created.

Bray said eliminating the handgun license without creating the database means Indiana police officers will have no easy way of knowing whether a person they encounter on the street with a gun is legally permitted to be carrying the weapon.

That interpretation of the bill is disputed.  From journalgazette.net:

Guy Relford, a Second Amendment attorney in Carmel, disputed Bray’s characterization of the bill. He also has a radio show called “The Gun Guy.”

“This is an outright lie. H.B. 1369 did not mandate any new ‘database’ at all and certainly did NOT contain a ‘poison pill,’” he said in a Facebook post. “The bill simply required a ‘process’ for getting information in existing criminal history databases, … to an officer on the street. That process could be as simple as a radio call or an email.”

Resolution SR 39, has many lofty sentences about supporting the right of the people to keep and bear arms. It has no force of law. It may be a coincidence it was passed by Senator Brown’s committee on April Fool’s day.

Instead, the Senate will support eliminating the $75 fee for a lifetime permit after the Legislature eliminated the state’s five-year permit fee in a 2019 bill.

If the Indiana Senate can eliminate the fee for a lifetime permit, they could easily have passed Constitutional Carry, if President Pro Tem Bray had wished to pass it. Bray represents Indiana Senate District 37.