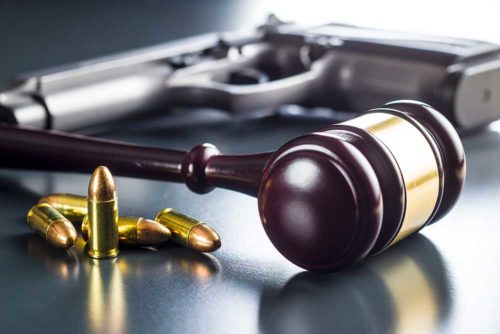 U.S.A. – -(Ammoland.com)- “‘There is no right to carry arms openly in public; nor is any such right within the scope of the Second Amendment,’ U.S. Circuit Judge Jay Bybee, a George W. Bush appointee, wrote for the majority of an 11-judge panel in a 127-page opinion,” Courthouse News reported. “Looking back on 700 years of legal history dating back to 14th century England, seven judges in the majority found ‘overwhelming evidence’ that the law has never given people ‘an unfettered right to carry weapons in public spaces.’”

This was in the Ninth Circuit Court of Appeals, a collection of black-robed Nazgûl that has been subverting and undermining the right of the people to keep and bear arms for a lifetime. There have been occasional rare glimpses of light that snuffed themselves out, like Alex Kozinski, who appeared to understand 2A and Founding intent better than most but resigned under a sexual misconduct cloud. It’s the court that denied the Second Amendment applied to individuals back in the pre-Heller/pre-McDonald case of Hickman v. Block, when Circuit Judge Cynthia Holcomb Hall, a Reagan appointee, added this footnote to her 1996 opinion:

The case the Ninth Circuit ruled on here is Young v. Hawaii, an ongoing and longstanding legal battle reported on several times by AmmoLand Shooting Sports News and being fought by attorneys Alan Beck and Stephen Stamboulieh. George Young is a veteran denied his right to carry a gun either openly or concealed, who has had his case on appeal since 2012, and who turned 71 last September. It’s almost like the oath-breakers on the court are trying to tell him (and us) something about when they plan on recognizing our unalienable rights.

Leave it to arrogant statists on the bench not to recognize the basics of the Constitution they swore an oath to uphold. The law doesn’t give people the “unfettered right” to do anything, Besides, by seeking a government permit with plenty of conditions and restrictions, what Young is going for has plenty of “fetters.” That alone shows “Justice” Bybee to be a dammed liar (among other things).

With the courts placing all their stock on stare decisis precedent whenever they want to collectively give a finger to Founding intent, it’s curious such a wrong-headed declaration could be offered in light of what the Supreme Court acknowledged in Cruikshank (and cited in Heller):

“This is not a right granted by the Constitution. Neither is it in any manner dependent upon that instrument for its existence.”

Rights are preexisting and whether you favor “endowed by our Creator” or inherent to the condition of being human, everyone has them, whether tyrants recognize it or not.

But speaking of stare decisis, it’s remarkable how official swindlers ignore it and resort to lies of omission when the record is inconvenient to their agenda. Because in all the “research” these Ninth Circuit frauds insist they put their clerks through about the 1348 Statute of Northampton and other misdirections in order to convey the illusion of sounding authoritative and scholarly, it’s curious no one was inclined to recall another Supreme Court decision. Tell me no one knew about the much more recent (and infamous) 1856 Dred Scott v. Sandford case.

“It would give to persons of the negro race, who were recognised as citizens in any one State of the Union, the right to enter every other State whenever they pleased, singly or in companies, without pass or passport, and without obstruction, to sojourn there as long as they pleased, to go where they pleased at every hour of the day or night without molestation, unless they committed some violation of law for which a white man would be punished; and it would give them the full liberty of speech in public and in private upon all subjects upon which its own citizens might speak; to hold public meetings upon political affairs, and to keep and carry arms wherever they went.”

Yeah, the majority fell into the same “give rights” trap, but here’s an unmistakeable one the court recognized “citizens” had:

“…to keep and carry arms wherever they went.”

Per what I call Steiger’s Maxim:

“We’ve been conned. Bare-@$$ naked in the town square conned.”

“The Ninth Circuit’s opinion, which finds the Second Amendment right does not apply outside the home at all, contradicts the decisions of every federal circuit court in the country that has ruled on this issue,” Courthouse News quoted attorney Beck. “We will be seeking Supreme Court review in order to overturn the Ninth Circuit’s erroneous decision.”

But all the Supreme Court has to do to let that decision stand is…nothing. They can refuse to hear it and don’t even have to give a reason why. And with all the ways John Roberts has shown us he was either a Democrat mole or else someone’s got some juicy photos of him he doesn’t want to be made public, that seems to be the preferred tack.

I’ve repeatedly pointed out over the years that there is no more egalitarian power-sharing arrangement than the right of the people to keep and bear arms. I’ve also observed that those who would rule never voluntarily relinquish power, and we can expect no truly fundamental changes in that dynamic unless there’s a credible “or else” attached to the demand.

Our situation is not unique. The Founders acknowledged it in their remarkable Declaration:

“Prudence, indeed, will dictate that Governments long established should not be changed for light and transient causes; and accordingly all experience hath shewn, that mankind are more disposed to suffer, while evils are sufferable, than to right themselves by abolishing the forms to which they are accustomed. But when a long train of abuses and usurpations, pursuing invariably the same Object evinces a design to reduce them under absolute Despotism, it is their right, it is their duty, to throw off such Government, and to provide new Guards for their future security.”

At some point, something’s gotta give. As long as a critical mass of gun owners are committed to not just proclaiming, but meaning “WE WILL NOT DISARM,” those who won’t stop pushing are setting themselves up to find out just how serious of a pledge that is.