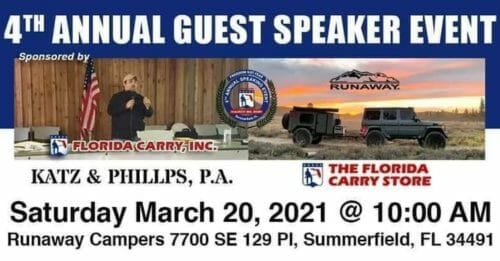 Florida – -(AmmoLand.com)-  On Saturday, March 20th 2021 over 100 patriots assembled to celebrate freedom.  It was the 4th Annual Speaker’s event, hosted by Kevin Sona and sponsored by  Florida Carry Inc. & Katz & Phillps, P.A. The Firearm Firm.  The event featured 2nd Amendment leaders, patriots, and advocates from all over the country, coming from as far as California.  The event was emceed by Paul Lathrop, the Deputy Director of New Media for the Second Amendment Foundation.

Promoting Firearm Safety, Training and Education. This was the first in person gathering of 2nd Amendment advocates in the COVID era.  Speakers and guests included:

Emcee Paul Lathrop played double duty, not only introducing everyone but also handling all the technical aspects to make sure the event went smoothly.  In talking to him about his experience, Lathrop said:

“I was honored to be asked to emcee the event.  This is the second year that I have attended and it is on my list of must attend events.  Not only did we hear from some of the “heavy hitters” in Second Amendment advocacy, the opportunity to interact one on one was priceless.  I want to thank Kevin Sona and the entire group from Florida Carry for putting on this event.”

One of the attendees, Tom Knighton, a writer for Bearing Arms drove from Georgia to attend.  This was his first time coming to the speakers’ event and was pleased to have done so.  In talking with him he noted:

“I got sunburned, my back hurt, my feet hurt, and it was such a great event, I didn’t even care. Every state needs to consider having events like this.”

Stephen Shives, the owner of Runaway Campers was gracious enough to allow the event to commence on his property.  His and his staff’s support of Kevin Sona’s efforts must be commended!  They not only were subject to hate mail, nasty voicemails, and threats of cancel culture, but they also went out of their way to clean out their shop to give a stage for the venue.

Nasty Voicemail Runaway Campers got From an Angry Karen:

Stephen talked to AmmoLand News about the event:

“It is a privilege to have the opportunity to work together with people that stand for the rights and values that have made this nation great.”

Amanda Suffecool hosted a concealed carry fashion show put on by REALIZE Firearms Awareness Coalition.  The show consisted to several participants modeling different carry options.  Suffecool is passionate about these events and commented on her involvement:

“Concealed Carry Fashion Shows are fun and educational. I like to say its to show you what you cannot see. New carriers feel overwhelmed with choices, and everyone has a different opinion of what’s best. Defining best is dependent upon body type and the gun you chose to carry. And also the effect that many, if not all, shooters feel when they first start carrying. The neon sign (in your mind) that is pointing at your gun and flashing “Look here”.

Doing a show at an event where gun people come from across the country adds a level of fun. I get to tag my friends and get them involved. The audience gets to see some of their 2A heros, speakers, role models having a good time and hamming it up.

These shows happen across the country, and I have been blessed to produce shows for NRA, shows featured on HBO and on VICE in addition to little trunk shows that pop up in campgrounds near you.”

There was a panel discussing diversity in the 2nd Amendment community.  A diverse cross-section of America was represented in discussing different issues that are important to rights preservation and breaking down stereotypes.  Patrick Collins, one of the participants in the panel told AmmoLand News some of his messages:

“Our youth are typically only taught that Cops and Criminals carry, they forget about the armed citizen…Further, You can’t make murder more illegal.”

Charlie Cook, one of the event’s featured guests also had some encouraging words about attending the event:

“It’s great to be able to see many 2A family members together again and in person. Seeing each other online is great, but getting energy from the in person events is amazing.”

Kevin Sona the event organizer was delighted by the attendance and quality of the program.  To him it was a success to see so many patriots assembled in one place.  In talking with Sona, he said this about the event:

“It was a ton of work to pull this off.  I could not have done it without the help of my wife Sarah, as well as our children.  I’m eternally grateful for Runway Campers and Stephen Shives for stepping up to give us a place to assemble, especially in light of the nasty phone calls and emails they received for planning on having us.  This event is about networking and education.  To get a chance to meet the who’s who in the Second Amendment world, and I’m excited to announce that we’re already in talks about planning the 5th event, so stay tuned!”

If you did not get a chance to attend the 4th Annual Speakers Event, that is okay.  Video from the day has been archived and is available in two parts:

All in all, the event was a huge success.  Getting the opportunity to hear from so many advocates from so many walks of life on 2nd Amendment topics is really a great thing.  AmmoLand News was honored to attend such a wonderful engagement and we look forward to what may come next.  Be sure to be on the lookout for the next event and add it to your calendar!