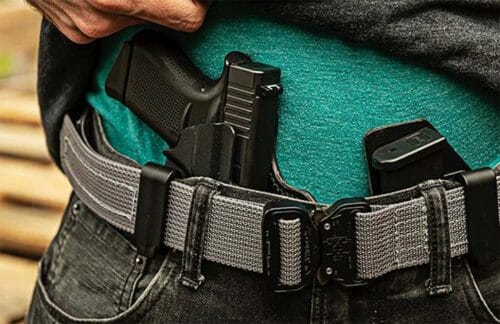 U.S.A. –-(AmmoLand.com)- The Ninth Circuit Court of Appeals, in an en banc panel, has found there is no “Right to Bear Arms” in the Second Amendment of the United States Constitution. The majority opinion was written by Judge Bybee.

The case is the long-delayed Young v. State of Hawaii. It will undoubtedly be appealed to the United States Supreme Court (SCOTUS). Whether SCOTUS will grant a writ of Certiorari is unknown at this time. SCOTUS has refused to grant a hearing to nearly all Second Amendment cases for over a decade.

The consensus, at the time, was the Court was evenly split, with four justices likely in favor of enforcing the Second Amendment, and four justices in favor of gutting the Second Amendment. Justice Kennedy was considered a swing justice which could go either way. Therefore, neither side was willing to risk a case that might go against their desires.

Since then, Justice Kennedy has retired. Justice Ginsburg has died. They were replaced by Justice Kavanaugh and Justice Barrett. Both were advertised as strong originalists and textualists, who would uphold the Constitution as written.

The ruling class considers SCOTUS to have a strong conservative majority. It is far from clear. Chief Justice Roberts’ opinions turned sharply to the Left with his controversial opinion which upheld the constitutionality of Obamacare. Roberts was reported as bullying SCOTUS into finding the State of Texas did not have the standing to sue regarding constitutional irregularities in the 2020 elections.

Several seminal cases are coming before SCOTUS. Senate Majority leader Schumer directly threatened the court in March of 2020. Many think the threat was effective.

The majority in the Young v. State of Hawaii relies on two weak arguments. One is the qualifier sentence which Justice Stevens bragged about as being inserted into the Heller decision as the price of obtaining the vote of Justice Kennedy to uphold the Second Amendment. From the abajournal.com:

His only success, he said, was in getting Kennedy to persuade Justice Antonin Scalia to include language limiting the reach of his majority decision in Heller.

The limiting language was:

The Court’s opinion should not be taken to cast doubt on longstanding prohibitions on the possession of firearms by felons and the mentally ill, or laws forbidding the carrying of firearms in sensitive places such as schools and government buildings, or laws imposing conditions and qualifications on the commercial sale of arms.

The majority takes this sentence out of Heller and claims that an 1852 law made in the Kingdom of Hawaii, before it was ever part of the United States, shows a ban on the open carry of arms has been long-standing. There are numerous other references to a scattering of local laws and decisions, often out of context. The claim is that banning the open carry of firearms is a long-standing prohibition. It is a false claim, as noted in the dissent by Judge O’Scannlain:

Respectfully, the majority’s opinion—and in particular,its extreme and bizarre reliance on the mere fact of some historical regulation of firearms—represents a gross misapplication of the textual and historical inquiries that Heller demands.

The majority uses long-winded, and often, out-of-context quotes from irrelevant laws, to obfuscate the irrelevancy in 109 pages.

The Ninth Circuit is the most overturned Circuit Court in the country.

It will take time to appeal the case to the Supreme Court. The Supreme Court is not required to take it. Several other cases are in the process about the right to bear arms outside the home.

The dissent by Judge O’Scannlain is well worth reading.