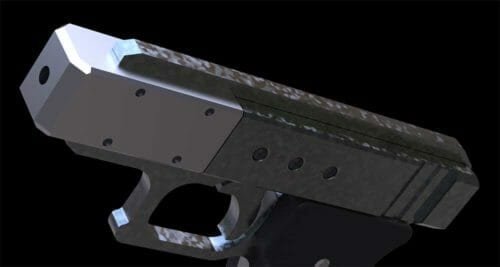 Opinion by Cody Wilson
Editors Hote: Please see the embedded response from Rob Pincus below as he discusses the same issues with Maj Toure.

USA – -(AmmoLand.com)- Mr Pincus is a vintage gun nut from a now-dead century. He’s a shooting instructor, former law enforcement, a commissioned United States Army Reserve officer, and a military college graduate with a degree in Political Science. In short, he’s a boomer. And boomers have the terrible burden of still believing in things like: Law enforcement, the United States, the Army, college, and Political Science. Boomers like Rob believe these royal institutions are “monuments of unageing intellect” and couldn’t possibly be dead.

On a recent episode of (what else but) the We Like Shooting podcast, Rob described a future gun industry where brands might sell files along with their hardware. In this future, big brand CAD data would be watermarked, but strongly supported by the market. The Napster-Esque days of 3D guns would pass, but an iTunes era would charge in to replace it. You might even see a DIY booth at SHOT Show. I’d ask 3D gun twitter to not be a bunch of queens about this.

Mr Pincus didn’t know what digital rights management (DRM) even was until this week. Met without the suspicion that he is a collaborator, his podcast observations are, of course, completely obvious. I made the exact remarks to the national press three years ago. Mr. Pincus’ only crime is that of still living in the illusion of the post-ideological consensus.

Rob’s blandly-named “Second Amendment Organization” stresses that it’s as non-partisan as it is non-profit. What? In a strange open letter on this website, Rob reminds us that Biden voters own guns. Why? Let’s not scare the left away, he writes. But Rob, we reply, the Left isn’t scared.

I believe we’re angry with Rob for not yet recognizing the reality of our cold civil war. In late American democracy, elections have become entirely a matter of self-defense (and will be for as long as they last). Saying the 2A is just another “issue” like this is 1995 makes Rob a plausible chump.

Or have you already forgotten your Revolution? There is no social or technical project, no political imposture or positive value system, that can contain what we have unleashed. No boomer conspiracy can even contemplate our animating ideas: that our energy and innovation is derived from risk and anti-economic absurdity; from prodigy and the excess of regulation. That the world’s secret, catalytic impulse is antagonistic, immoral, and suicidal. We place our trust in the abjection of free enterprise.

Compare this moment to 2016. NSSF kicked Defense Distributed off its rolls and out of SHOT Show. “Does not contribute to the firearms industry.”

Now in 2021, they can’t get their nose out of Polymer80’s ass. #ad NSSF didn’t change for reasons of morality, history, or progress. Rob Pincus doesn’t need to know and recite our “values.” Must we explain to grandpa that what humanity views as the history of capitalism is actually “an invasion from the future by an artificial intelligent space that must assemble itself entirely from its enemy’s resources?”

No. Relax. The boomer has been seduced.

Cody Wilson is the founder of DEFCAD, the world’s largest 3D gun repository.

Editors UPDATE: Rob Responds to the issues above in this call with Maj Toure.