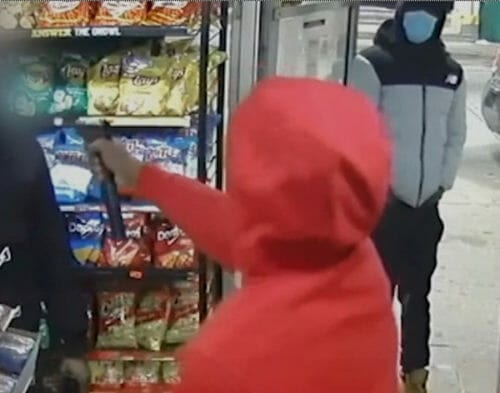 U.S.A. –-(AmmoLand.com)- On 28 January, a young man in a red hoodie snatched a pistol from a man openly carrying it, in Detroit, Michigan. The robbery occurred in the BP gas station at Seven Mile and Wyoming Ave. A confederate held the store door open. It was unclear if there was another confederate in the getaway vehicle. The getaway vehicle did not have a rear license plate.

The man openly carrying the pistol was identified as being 53 years old. The surveillance video, released on 20 February, reportedly by the Detroit Police Department, shows the snatch. The open carry victim is busy at the counter with his wallet in his hand.

It appears the crime was not a crime of opportunity, but was planned. The perpetrator in the red hoodie does not have to discern the pistol and make a decision. The snatch is done as soon as the pistol is seen. The perpetrator appears to know what is available and what he is going to do.

The pistol appears to be in a simple clip-on holster, which is merely clipped to a pocket. There does not appear to be any retention strap. The image of the black pistol, in a black holster against black pants makes resolution of the details difficult.

Some early accounts indicated the thief pointed the stolen gun at the owner. That is incorrect. The gun pointed at the owner is a different gun with an extended magazine. The thief was prepared for the robbery in advance.

It is difficult to stop a crime that is well planned, with confederates, to take advantage of a vulnerability. In this case, the man at the counter had his attention occupied, his hands occupied with his wallet, and the pistol had very little retention.

The robber was armed with their own deadly weapon, or reasonable facsimile thereof.

Kofi Kenyatta tells fox2detroit there is a current backlog of applications for concealed pistol licenses in Wayne County, Michigan, where Detroit is located.

Kofi Kenyatta is the co-founder and vice president of the Black Bottom Gun Club which advocates for the Second Amendment and promotes safe and responsible gun ownership in Detroit and the surrounding areas.

“As I watched the video I definitely don’t want to blame the victim here, but it’s important that we have a perception of the elements in our immediate environment and make sure that we are aware of surroundings, alert to potential threats as well as being ready and able to react to actualized threats,” Kenyatta said. “Based on the feedback from the numerous instructors that are part of the Black Bottom Gun Club, there are many new Wayne County and Detroit firearm owners – and unfortunately they don’t have the ability to properly, legally obtain their CPLs.”

Kenyatta is referring to the nearly year-long wait to get an appointment with the Wayne County Clerk to apply for a Concealed Pistol License. He and others believe that could lead to more people open carrying.

Renewing permits takes much less time than obtaining a new permit, because of reforms passed in 2015. Many experiences are posted at migunowners.org:

About two weeks ago, a resident of Wayne County recounted obtaining a renewal in five days.

Received my online renewal confirmation on Feb 1. Post marked on Feb 4th. In my hands on February 6th.

People who carry concealed also have their firearms stolen, sometimes because the robbers do not know they have a firearm.

A retired officer thought the whole situation might be fake, a set-up to obtain clicks. It appears it was pre-planned.

One obvious lesson is to use better firearm and holster retention. There are many better choices for open carry than a  simple clip-on holster.