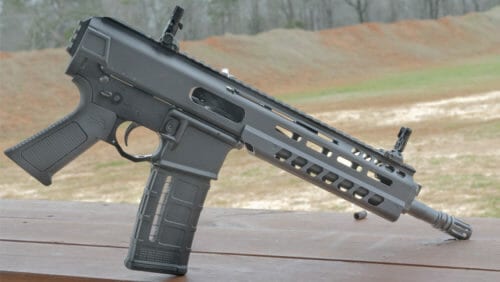 U.S.A. -(AmmoLand.com)- Not long ago, piston guns like the new Palmetto State Armory JAKL were the exception, not the rule in the realm of modern sporting rifles. One of the side effects of this, was that these guns were dramatically more expensive than standard direct impingement AR-15 rifles and carbines. Despite the relatively high cost, piston-driven self-loading firearms like the SCAR and the BRN-180 have proven incredibly popular with American shooters. And with price being the biggest obstacle for shooters to obtain these guns, it was only natural that the king of affordable AR-15s would step up the plate – Palmetto State Armory.

The easy answer to this problem would be to simply take the route so many other manufacturers’ have – retrofit an AR-15. But the engineers at PSA weren’t content to do that. Instead, they build a piston-driven weapon system from the ground up. Sure, it’s easy to argue against reinventing the wheel, but what if the wheel isn’t the solution? Designing a weapon system from the ground up to take advantage of a particular operating method makes a great deal of sense as it involves less shoe-horning and more purpose-built design. And it’s clear that shooters were excited for the gun, based on the overwhelmingly positive response during its reveal at the 2020 SHOT Show.

But what is the JAKL?

In the broadest sense, it’s a magazine-fed, semi-automatic firearm. But more specifically, it’s a long-stroke, piston-driven firearm built with what is ostensibly an extruded aluminum receiver and forged steel barrel. It’s a gun that takes the gold-standard ergonomics of an AR-15 and mates them with the proven reliability of the AK’s long-stroke piston action.  (Yes I know I sound like an episode of Future Weapons!)

And while those aspects are nothing new to the gun world, the fact that they’re being offered at a price point that is a fraction of the cost of some of its big-name competitors stays true to PSA’s unofficial mantra: market disruption. Believe it or not, there was a time when America’s favorite black rifle wasn’t affordable to most shooters – believe me, I bought my first Bushmaster in 2001 for $900!

With that all said, how was my limited time with the JAKL?

Which is ironically the highest praise possible for a new design. In the infamous words of Todd Howard, “It just works.” The gun is elegant in its simplicity and utilitarian design, and its recoil is unremarkably similar to that of a similarly-sized direct impingement AR-15 pistol.  In terms of accuracy, I couldn’t tell you as I was only shooting at a paper target some 30 yards away with iron sights. Plus, the gun tested lacked any sort of optics or stabilizing brace. Still, all hits were clearly on paper, but getting a solid grouping was impossible – especially with my less-than-stellar eyesight.

Reliability was nearly perfect (we had one stove-pipe), and that was even with a prototype gun that had its recoil mechanism erroneously installed by another, unnamed media personality during a photo-shoot. With the exception of the Browning Auto-5, I don’t know of any other firearms off-hand that can make such a claim.

So what’s the takeaway from this brief time with the highly-anticipated JAKL? In a word, promising.

If a pre-production prototype gun looks, feels, and runs this well, a factory-built gun with all the kinks ironed out will be a no-brainer for shooters looking to scratch the SCAR itch without taking out a second mortgage on their house. Finally, pricing and availability was stated to be around $1,000 with guns arriving on PSA’s website this Summer – possible sooner. So you might want to sit on that stimulus check a little longer.

When he’s not reviewing guns or shooting for fun and competition, Jim can be found hiking and hunting with his wife Kimberly, and their dog Peanut in the South Carolina low country