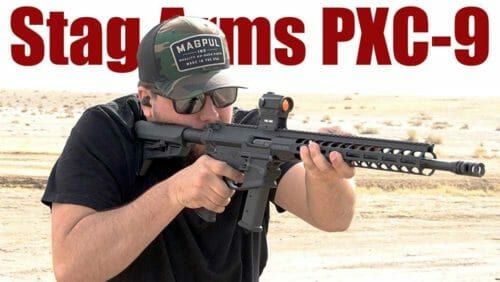 U.S.A. –-(AmmoLand.com)- There are a few reasons people buy AR-style pistol caliber carbines: home defense/ truck gun, competition shooting, introducing new shooters to rifle platforms, or general plinking fun. Once upon a time, you might have tossed in “cheap training alternative to 5.56”, but we all know those days are long since gone. With that said, if you are looking for a PCC for one of the above reasons, you should definitely consider Stag Arms PXC-9.

Stag Arms released the PXC at the 2019 SHOT Show and made a point to develop the firearm with the above considerations in mind. What they ended up with is a highly reliable PCC platform that will perform well in any pursuit the end-user desires. Stag released the PXC in multiple variants including a 5.5″ or 10” pistol, a 10” SBR, and a 16” rifle. Stag Arms was kind enough to send me the 16” rifle version for review, and it did not disappoint!

Out of the box I wanted to take the Stag Arms PXC-9 into a competition setting. Even in a rifle length the PXC is noticeably lightweight and features a very effective VG6 Gamma 9mm muzzle brake. In the video above you will see I am shooting controlled pairs on an IPSC steel plate at 25 yards. There was hardly any muzzle rise, which is not surprising for a 9mm rifle, but the VG6 muzzle brake does go a long way in taming the recoil even further.

Stag Arms PXC-9 features 13.5” M-LOK SL gen 2 handguard, allowing the attachment of any accessory you might want to add. If you wanted to change out the handguard for another you do have that option as the PXC is set up to be interchangeable with most AR-15 components. This includes changing triggers, charging handles, safety selectors, and stocks or pistol braces. So if you wanted to go for a trigger designed for competitions you can easily do that.

One of the best features any PCC can have is the ability to use Glock magazines. Glock mags are by far the most commonly available magazine today, come at a good price point, and have aftermarket options to increase capacity as well as manufacturers who produce their own Glock style magazines. Stag made the correct decision in going with Glock mags for the PXC and designed the PXC to work flawlessly with them. The PXC also has last round hold-open which is a very important feature for any pursuit you might choose to use it in. During my time with the rifle it held open on every magazine, making reloads into the flared magwell all the easier.

The rifle uses a 16” barrel with a 1:10” twist rate and most importantly has a feed ramp that was designed to properly feed the 9mm rounds into the chamber. While that might sound like common sense, it did require some work on Stag’s part. The combination of a properly designed receiver to hold Glock magazines at the correct angle and the modified feed ramp result in an ultra-reliable firearm. During my time shooting this rifle, it had zero issues feeding ball ammo or hollow-points making it ideal for competition or self-defense use.

The direct blowback design that the Stag Arms PXC-9 utilizes also contributes to the reliability of the platform. If you have a look at the bolt carrier group you will notice a conical-shaped bolt face that fits perfectly with the feed ramp and holds the 9mm cartridge firmly in place while feeding.

Shooting the Stag Arms PXC-9 was very enjoyable and as stated above would suit the needs of whatever role you choose to use it in. For myself, I will definitely be looking for PCC competitions to participate in with this rifle. It could use a different trigger than the mil-spec that it ships with. If you wanted to use the PXC for self-defense it would also be ideal as it had no issue running hollow points and can easily be suppressed due to its 1/2×28 threads. If ammo prices ever go back to what they were, the PXC would also be an excellent training alternative to 5.56 AR-15s as they share the same manual of arms. If you are looking for a PCC for any reason you should definitely have a look at Stag Arms PXC-9!

Duncan is a firm believer in the Second Amendment and that “shall not be infringed”, which means exactly that. A life-long firearms enthusiast and a graduate of George Mason University, now competing regularly in 3 gun competitions, Duncan is always looking to improve his shooting skills. Duncan is a regular contributor to AmmoLand and assists in the everyday gun-news publishing as an assistant editor. 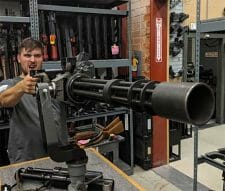