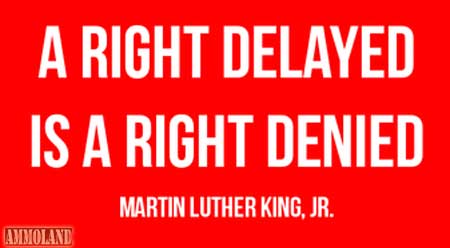 USA – -(AmmoLand.com) There’s a lot of talk about the H.R. 8 anti-gun bill that just passed the House of Representatives. This would, in fact, be a back-door gun registry; but we find much more devious intentions when we read between the lines of this potential legislation.

H.R. 8 is an Act to require a background check for every firearm sale. Those who don’t know any better might say, “so what’s the big deal with a firearms background check?” That’s exactly what anti-gun bureaucrats want you to think. But it’s a huge deal. Not only is H.R. 8 an infringement on our rights protected by the 2nd Amendment, but it’s also detrimental to the gun-ownership of law-abiding citizens.

Senior Vice President of Gun Owners of America, Erich Pratt said, “Under H.R. 8, virtually every transfer of a gun would become illegal if one doesn’t jump through the proper hoops to register the transaction. And yet the bill will do nothing to stop bad guys from getting guns because they steal their guns or get them on the black market. So, like any other gun control law that has ever passed, this bill will only affect the law-abiding.”

John R. Lott Jr., President of The Crime Prevention Research Center (CPRC) determined that 96-99% (or more) of background check denials are false positives. In other words, good guys being denied their God-given right.

Ronnie Coleman from Virginia was denied his gun purchase because his name and social security number were (according to authorities) “close enough” to that of a convicted felon.

Frank Wise was a Florida man who was denied his gun purchase because 20 years earlier, after his employer went bankrupt, Frank accidentally bounced two checks. Frank was told that his record was cleared but 20 years later was denied firearm purchase.

Anti-self-defense hate groups like Moms Demand Action love to parrot the false talking point that background checks prevent criminals from getting guns but they fail to tell you about deaths caused by the delays a faulty background check system cause. Carol Bowne being one of them. 43 days after Carol applied for her handgun permit in her home state of New Jersey, she was stabbed to death by the very man she feared. New Jersey legislators decided that Carol should wait an extended period of time before being able to defend herself, even though she had previously reported her killer to police and even obtained a restraining order against him. Carol Bowne did everything she could within the law to protect herself. But the State of New Jersey decided that they knew better.

The US Government Accountability Office compiled data from 2017 where they documented 8,606,286 NICS transactions. Of those 8.6 million transactions there were 112,090 denials. Of those 112,090 denials, there were only 12,710 investigations which tells us the vast majority of the denied background checks were obvious errors that should have never happened in the first place. Of the 112,090 denials, only 12 people who were not allowed to purchase a firearm were stopped, while over 112,000 law-abiding citizens were unnecessarily denied and made unarmed and defenseless.

Anti-gun Legislators seem to be less concerned with bad guys having guns because they know that the bad guys pay no attention to background checks in the first place, and more concerned with denying and delaying the good guys. It’s the good guys, the law-abiding citizens, and those who believe in freedom who are the real opposition to the radical, anti-American left-wing of our government. When we dig into the facts, we learn that H.R. 8 will ultimately result in the delay of gun-ownership by lawful Americans, inherently resulting in some potential gun owners just giving up and not pursuing their purchase any further. Should H.R. 8 become law, it would tip the scale even more in favor of violent criminals by giving them less opposition and putting good people at even more risk.

The 2nd Amendment is not a privilege.
It’s your right.